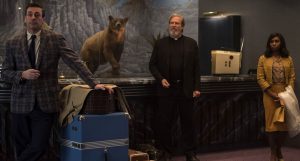 Slam, shuffle, shuffle, creak, shuffle, and plop. Bad Times at the El Royale skillfully opens with a sensory experience and a blank screen effectively peaking audience’s curiosity (Good job Sound team!). Felix (Nick Offerman) frantically hid a secret and, as expected, was murdered. Fast-forward roughly 15 years; Darlene Sweet (Cynthia Erivo) and Father Daniel Flynn (Jeff Bridges) meet literally on the state line between Nevada and California, which is straddled by the El Royale. The meeting was apprehensive yet playful. Rounding out the known inhabitants of the hotel are Laramie Seymour Sullivan (Jon Hamm), a traveling vacuum salesman; Miles Miller (Lewis Pullman), the front desk clerk; and Emily Summerspring (Dakota Johnson), a mysterious wildcat with sharp claws. Everyone in burdened by a secret, which adds to the mysterious, dangerous air of the El Royale. Soon they will find out what lurks within its walls. 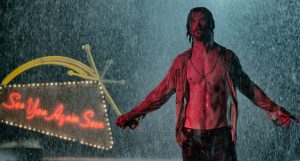 The mix of established and new talent was well matched in Bad Times at the El Royale as evident in the manner in which the characters were relatable and real. The audience is shown an expanded acting range from the known actors. A fine example of this is Billy Lee portrayed by the ultra hottie, Chris Hemsworth. My goodness, that man flipped on me. No longer the strong Thor or quirky Kevin from the Ghostbusters re-imagining Hemsworth is a sexual predator and villain with demons of his own. Mere glances at him or words from his mouth solicit desires to kiss him and immediately beat him down. Hemsworth was very convincing and although he rocked this sleazeball, I prefer my hero/antihero. In addition, Johnson has permanently come into her own as Emily. The second and third installment of the Fifty Shades series gave a peek at the strength and commanding presence of this hellion.

In Emily, Johnson is raw, determined, and to be feared as she handles her business. A showstopper and scene-stealer is the powerhouse that is Erivo. She sneaks in meek and mild, but the depths within will wow and astonish you. Others must see it too, because she is busy with her next surefire success already, Harriet. Erivo will portray the courageous and stealthy Harriet Tubman (traits evident in Bad Times at the El Royale). Keep your eye on this one! Another up and comer Pullman is fairly new, but nails his shocking performance was Pullman as Miles. The glue of this ensemble is the venerable Bridges. The man is just great, funny, and has a profound delivery that keeps it real as he drops pearls of wisdom. He will move you tears in this one. 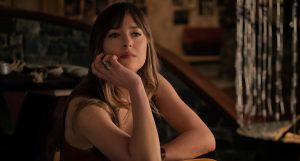 Kudos to writer and director Drew Goddard! The individual storylines for each character is methodically constructed and well aligned to the plot of Bad Times at the El Royale. Although some scenes could have been trimmed and left on the cutting floor, the story is engaging but a tad on the long side at 141 minutes. Case in point, Hamm’s device hunt. CAUTION: Shift in the seat at least twice to afford pain for there is no intermission. Ha. A fair amount of laughs are riddled with witty banter to label this a smart mystery, thriller. The film has a few predictable moments, but as the enigmas are unraveled the viewer will need to stay on their toes to fully appreciate the cinematic journey through which Goddard leads them. Solid editing was experienced, too, so much you’ll never see coming (Cailee Spaeny as Ruth Summerspring, WOW!). Overall, I highly recommend Bad Times at the El Royale.