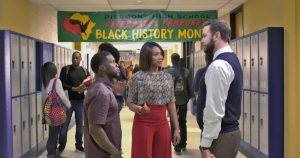 Night School opens with young, Teddy Walker (Kevin Hart) struggling to study for his GSAT test. Right off a cool special effect, test questions pop off the page and fly about the room, makes Teddy’s challenge tangible for the audience. Teddy’s father, Gerald, portrayed by the venerable Keith David is convinced that he is dumber than a box of rocks. Coddled by his mother, Carole (Donna Biscoe), Teddy wakes to a gym filled with anxiety. As the questions yet again fly off the page, a tantrum sets in, Teddy storms out spouting claims that he will have money, a beautiful woman, and a fly ride the age-old question looms. Can a person be successful without college? Fast-forward 17 years; Teddy has Lisa, a Porsche Carrera, killer apartment, etc. However, a fiery misjudgment will change his life. With job gone, car gone, Teddy plummets into hysterical panic mode. In order to set his life to rights, he must obtain his GED. It will not come easy either. 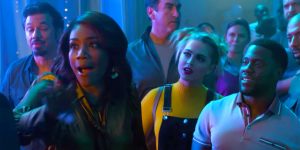 Hart sets to break your funny bone in Night School. Armed with a host of comedic talent, overall the film doesn’t fail. My first busted out laughing at Hart during Think Like a Man and have enjoyed in others like The Wedding Ringer, Ride Along series, and Jumanji:  Welcome to the Jungle. Unfortunately, there were scenes where the joke was allowed to become stale and carried on for too long. Hart’s Teddy may be the lead character, but the spotlight is immediately shifted as soon as Carrie (Tiffany Haddish) enters the frame. This woman has skills. Ever since Girls Trip, Haddish has sky rocketed on my “who to watch for” list. Haddish is real, raw, and fearless which makes for highly relatable and engaging comedy. She certainly brings her skills to Night School. Seeing Hart and Haddish square off was like David and Goliath except Goliath triumphed this time. Another character that stole the scene often was Theresa (Mary Lynn Rajskub). Rajskub has a dry, depressed humor that actually works and not just in Night School, but also in Dude, Where’s My Car?, Punch-Drunk Love, etc. A nice surprise was Stewart (Taran Killam), Teddy’ arch nemesis. Killam’s delivery was unexpected yet

The music for Night School was on par with the plot progression, especially with T.I.’s “Whatever You Like.” As we were re-introduced to Teddy as an adult, establishing sequence proves that he has achieved what he set out to do. Kudos to costume design with their prime picks from homely to chic to plumb stupid (the Christian chicken). Night School has a few lulls in the dialogue, but all in all the audience was rolling. Though a comedy, Night School offers some insight into a common obstacle for many children in school. The shame and stigma that left unaddressed leaving the children feeling hopeless and sometimes leads to dropout.

I highly recommend Night School because it is full of gut wrenching laughs, silliness, and body slams galore. Yes, I said body slams. Trust, if Haddish was my teacher, I would gone all the way to PhD. She is killer and a role model for teachers. Run don’t walk to see Night School.  Anyway…