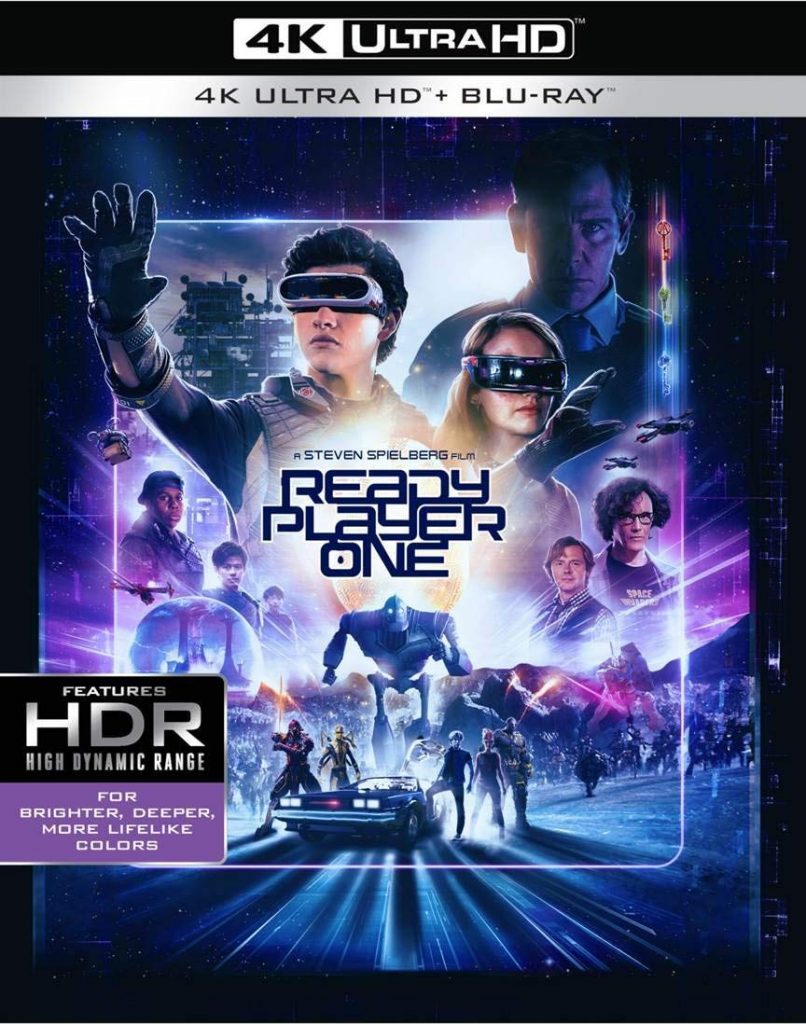 One of the most anticipated movies of the year is finally upon us with Steven Spielberg’s return to the fantasy/sci-fi realm in ‘Ready Player One‘, which is based on the pop-culture fandom novel from 2011 of the same name by author Ernest Cline. The novel was a best-seller and was chock-full of the 1980s and 1990s references in the form of video games, movies, TV shows, and more. in fact, every page of the book was like reading a nostalgic diary of your past childhood favorite things. ‘Ready Player One‘ takes places a few decades into the future where a simulated and very realistic virtual reality game is the main form of entertainment where people put on goggles and can be anyone or anything they want.

Most people transform into their favorite 1980s or 1990s superheroes, robots, and even movie monsters, where they can travel to different planets and battle with guns, race vehicles, or simply lay out on the beach. The possibilities are endless. The creator of this virtual reality game, which is called the Oasis has died and has left a series of virtual keys inside his game in hopes that one person will solve the game, find the hidden Easter Egg, and inherit the entire Oasis along with its trillions of dollars. Enter the young guy named Wade Watts (Tye Sheridan), who is a great gamer, but figures out that a big company called IOI, led by a sinister man wants to win the game and make the world and Oasis a much worse place. With the help of Wade’s friends, they rebel and launch an attack to win the game.

With so many pop-culture references throughout, it was only fitting that someone like Spielberg would take the reigns here and he does a great job showcasing the thousands of different characters from many movies in each scene, which include his own films. The visual feast here is fully CGI, but it all looks fairly good and you wish that you can pause the big screen and count how many characters you recognize from your childhood. It’s a lot of fun for sure with some big blockbuster action sequences that are exciting and thoroughly thrilling. I mean, who doesn’t want to see Spielberg’s T-REX from ‘Jurassic Park‘ and King Kong, along with the Iron Giant and Chucky the killer doll in the same scene with the Delorean Time Machine from ‘Back to the Future‘. That’s what you get with ‘Ready Player One‘, and it’s a ton of fun.

The other side of the coin here is that the characters, screenplay, and dialogue are super underdeveloped. There is not one character or piece of dialogue that you actually care about in the whole film, which in the span of the 140 minute run time is quite annoying. By the end of the film, you should feel at least something for these characters and be happy for them, but that’s not the case. It’s pure surface material and pop-culture references. I would say that’s a terrible thing, but Spielberg films each scene with perfection that you never really care either way about the story or characters. Upon future viewings, I might change my mind, but as for the first time seeing it on the big screen, it was a great deal of fun.

You can especially tell that Spielberg had a great time with at least 10 minutes of the movie where he enters the world of Stanley Kubrick, which just had me smiling and laughing the entire time. For fans of the book, you’ll notice quite a few big differences, but again, this is an adaptation and it works better on screen this way. ‘Ready Player One‘ is a lot of fun on the big screen, and you’ll love seeing all the pop-culture characters pop out in each scene. Despite the lack of any character depth, development or good dialogue, this one comes Recommended still.

The Video: Ready Player One comes with an impressive 2160p UHD image with Dolby Vision that brings out all of the nostalgic details we love in our favorite pop-culture characters. Most of Ready Player One is set in an intricate digital world that is either motion-capture or heavy CGI. The detail though is never hindered in these big sequences, but rather looks extremely comprehensive. In the Oasis, everyone’s avatar looks better and sleeker than their real-life human counterpart and has a highly digitized shine to them, but we still see facial pores and digital pixels easily here.

On the big Iron Giant, we see all of the dents and rust on its metal body, which looks amazing. In the chase scene at the beginning of the film and even during the big climactic battle, there is no softness to the image. Even when big bursts of debris or snow flies through the air, there is zero pixelation or softness. When the film is set in during Stanley Kubrick’s The Shining, there is no video noise or murky images with these CGI settings. It all looks realistic and smooth. In the real world, detail is sharp and vivid still with individual hairs and textured video game suits that come across nicely. Other backdrops and set pieces showcase their rough and dirty brick and stone buildings exceedingly well.

Colors in the Oasis are bright, bold, and striking on all accounts. Luminating neon colors of the entire color spectrum show up in the most fantastic ways, which just brightens up the screen each time we are in this digital world. The Dolby Vision highlights the different shades on the different worlds, no matter if it’s a bright planet or the darkness of the Doom planet. Shadows are consistent in the chase scene as they are when thousands of avatars are fighting in the snow. The red and blue on Chucky’s doll face shows just how great the colors can contrast against the gray and white backdrop of war.

However, when in the real world, the colors a bit muted and suppressed a bit, but I believe this to be a stylistic decision, rather than a transfer problem in order to showcase the explosions of color and entertainment from the Oasis and real life. Black levels are deep and inky at all times and the skin tones in the real world are natural. Lastly, there were no issues with any banding, aliasing, or video noise, leaving this video presentation with excellent marks. 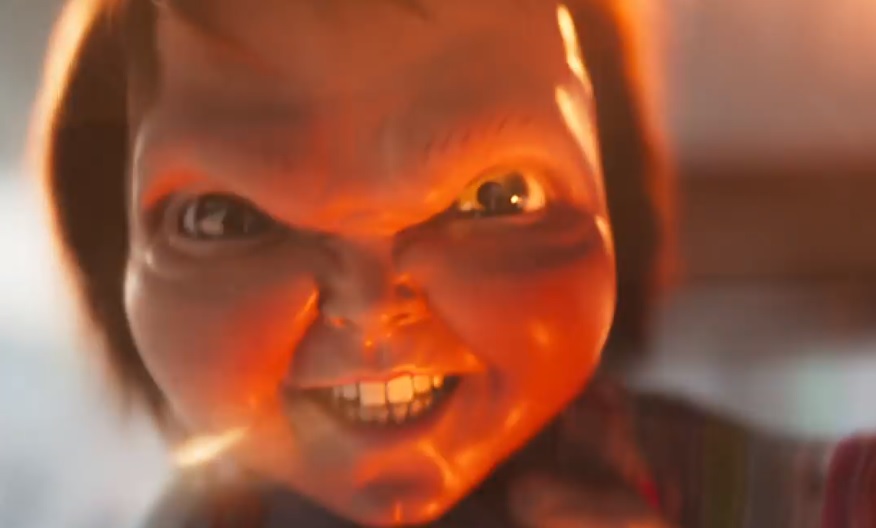 The Audio: Ready Player One comes with a demo-worthy Dolby Atmos track that is such a joy to listen to. You’ll want to show your friends this audio track to show off your new speaker system for sure. At the start of the film, we get some brilliant 80’s music that engulfs the soundstage, which then leads us to a narration on how the futuristic world is and what the Oasis is all about. It’s a perfect balance of music and dialogue. The sound effects hit 11 in the first chase sequences, with a ton of robust car engines revving of all types that brings a good low end of bass with each vehicle.

The explosions and wrecking balls are thunderous, and the tiny bits of structure debris flying through the air sound fantastic with excellent directionality. When the Jurassic Park T-rex shows up, as well as King Kong jumping high in the air from building to building – the height speakers kick in with amazing clarity and giant sounds that make it seem like the big ape is jumping down upon you. It’s actually a bit frightening, but a lot of fun. This is also true in the final battle scene where many avatars are shooting different weapons, all of which are heard on each speaker.

When Mecha-Godzilla shows up, the bass is dynamic as it roars from one end of the room to the other. Quieter moments sound equally as good, such as when in the Overlook hotel with that iconic creepy music that makes your hair stand on end. This track is one of the better audio mixes on the market for sure and one you don’t want to miss. Dialogue is clear and easy to follow at all times, and free of any pops, cracks, hiss, and shrills. 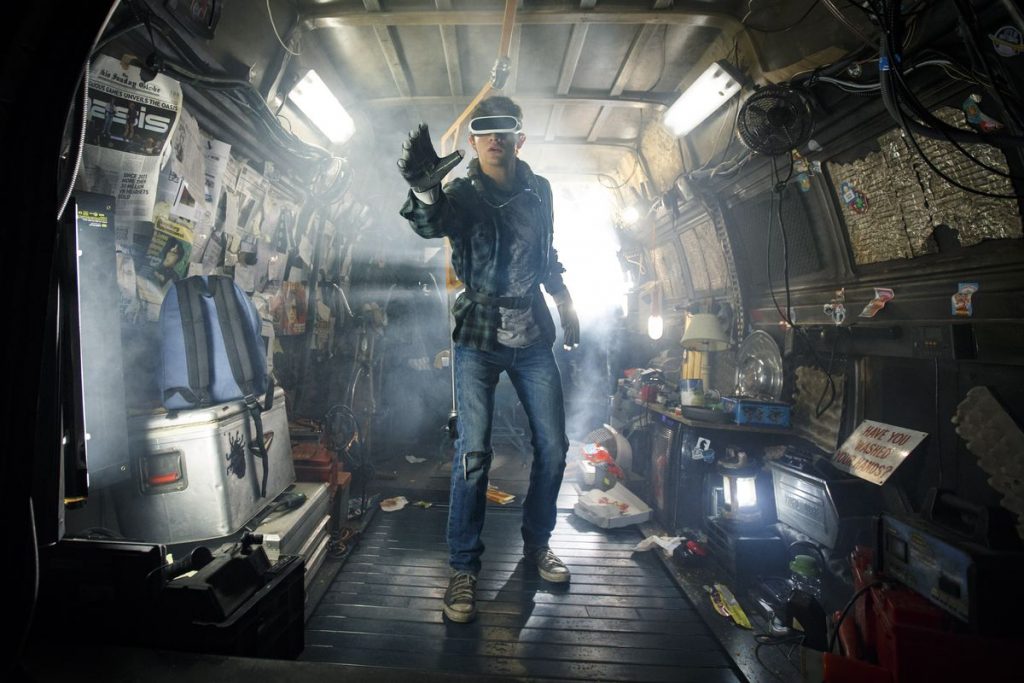 Game Changer: Cracking the Code (HD, 57 Mins.) – This is an in-depth EPK fluff piece with tons of cast and crew interviews, as they discuss making the film. They touch upon the novel, the references, video games, music, the visual effects, along with quite a bit of on-set footage.

Effects for a Brave New World (HD, 25 Mins.) – This extra focuses on all of the visual effects of the film and how they were made, including practical, CGI, and motion capture effects.

Ernie and Tye’s Excellent Adventure (HD, 12 Mins.) – The main actor and writer of the book/movie sit in their hometown of Austin, TX and talk about making the film.

High Score: Endgame (HD, 10 Mins.) – Here we have composer Alan Silvestri talk about his score for the film, pop culture influences and working with Spielberg.

Level Up: Sound fo the Future (HD, 8 Mins.) – Another look at all the sound effects for the film and how they mixed with the action on film.

Ready Player One is the visual spectacle for the ages. If you ever wanted to see your favorite pop-culture icons in one movie, this is it. The story adapted for the big screen by Steven Spielberg is magical and nostalgic in great ways, while never overstaying its welcome. There were some plot points that I wanted more of, but at the end of the day, this is still a highly entertaining film. The 4K UHD image with Dolby Vision is an upgrade from the Blu-ray version and highlights the digital Oasis perfectly. The Dolby Atmos track is demo-worthy as well with boisterous sounds at all times. The extras are worth your time, however, I wish there was a fun audio commentary track and a pop menu track to showcase every pop-culture icon that’s on screen. That being said, Ready Player One is a MUST-OWN!