Justifying the Female Villain: An Essay by Tuesday Shank!

I stumbled through my college career. After the better part of six years, I began my work on my senior thesis. I undertook the easiest thesis I could think for myself to do: analyze a television show. My advisor’s academic expertise was gender studies. As a fan of Joss Whedon, I knew of Joss Whedon’s reputation for feminist characters and decided to use my thesis to sing Whedon’s praises.

Thus, I began my work on “Careful Jayne, You’ll Scare the Women: An Analysis of Gender Representations in the Television Show, Firefly”. I watched Firefly enough that I’m still not eager to see it again. Halfway through the semester, I just wanted to watch anything else. 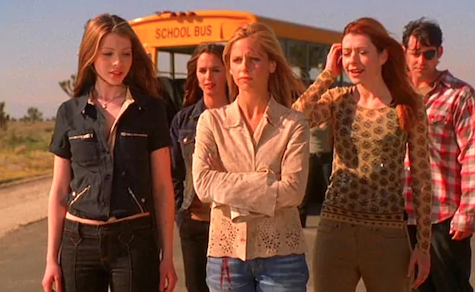 After a few breaks, I went “Crap. I’ve accidentally analyzed Buffy the Vampire Slayer. Please let me be wrong.”

“Is there a sane female villain in this series?”

Drucilla was insane – it’s not her fault Angel drove her mad. Vampire Willow is basically a carbon copy of Drucilla (with Vampire Xander as her Spike/caretaker). Why couldn’t a female vampire be conscious of their own bad acts? Sure, they can commit the same crimes, but only the females could be found “not guilty for reason of insanity.”

Could I think of other female villains in the series?

Faith. Rival Slayer, promiscuous, envious of Buffy and worked for the seasons “Big Bad” who treated her like a daughter.  #daddy issues and #female rivalry

Anya. Former vengeance demon. Betrayed by a lover and granted wishes to females jilted by their lovers. A bit wacky. #jilted lover #revenge #mildly incompetent as an adult human

Willow. Not only did a “vampire willow” exist, another version “Dark Willow” was the “Big Bad” of Season 6. “Driven insane” after her lover’s murder while she was dealing with addiction goes on a vengeance rampage. #jilted lover #insane #addict #revenge 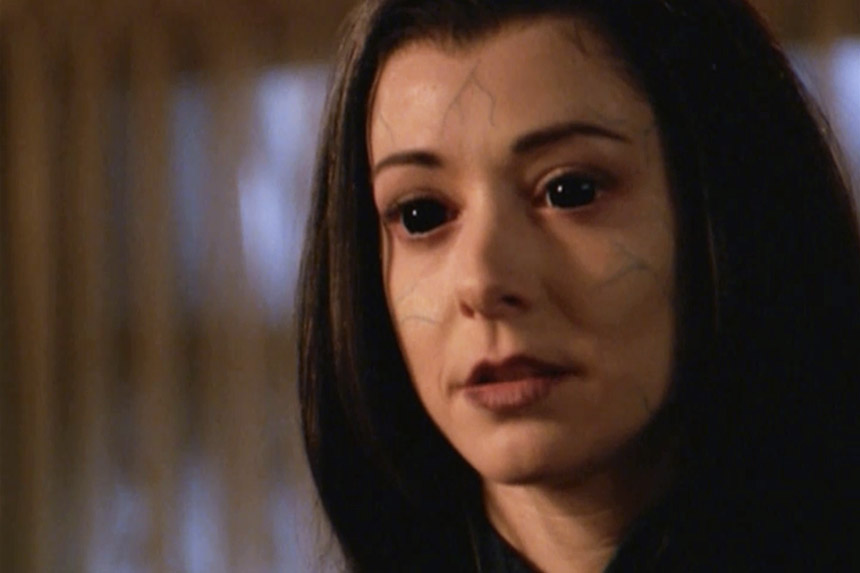 Glory, a God who was so batshit crazy that I’m not going to get into it.

I crossed my fingers it was just the more prominent female villains having emotionally driven/gendered backstories. What about a female from a “monster-of-the-week” type episode. “Well, I can’t think of any so that’s not a good sign.”

“Oh, there was the praying mantis teacher who tried to rape Xander to fertilize her eggs. She only preyed on virgins!”

Were our “evil” females one step away from a damsel in distress? Could a man have saved her from going down the “evil” path? Could a man save her from being evil? Could Xander literally talk to Willow to bring her “back to sanity” and thus defeat the season’s “Big Bad?” (Yes.)

Did “evil” females make us so uncomfortable that we had to diminish their “evilness” by removing their agency? Was it only okay for a woman to be evil if she couldn’t understand what she was doing, or if the audience could understand her feminine motivations?

And then I went back to my senior thesis as I clearly could not stop analyzing television. 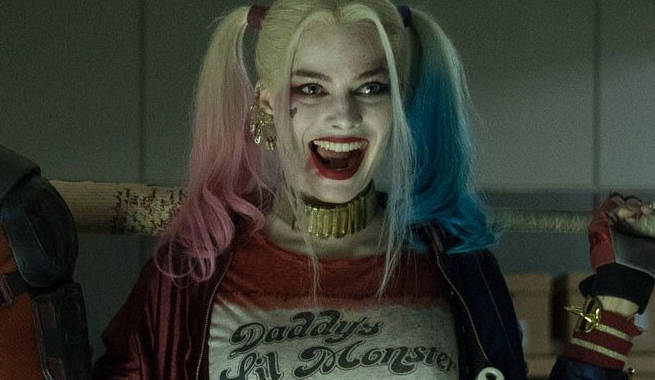 In law school, I watched Suicide Squad. As a law student at home, I was drunk at the time.  I never had high hopes for Suicide Squad. (But that’s another story entitled “How I Accurately Identify Movie’s Flaws Before Viewing Them”)

I eye rolled at the focus on the Harley Quinn’s backstory. Female comic book characters have gendered backstories so I cared very little that she was “driven insane” by a man she loved. The film focuses too much on Harley’s backstory/love story but Harley and the Joker have the widest commercial appeal so… whatever.

I was more interested in the Enchantress. Suicide Squad is about a group of super-villains acting on the side of good. Enchantress had to be one bad bitch to be “villain” enough to make everyone else look “good.”

I tuned in and out until the Enchantress was walking around a subway platform or some shit and mumbling. “What the hell is she saying?’ I rewound assuming I had tuned in too late. I was wrong.

The Enchantress is basically walking around mumbling about how the humans no longer worship her and how she would destroy them.

The Enchantress had “awakened” her brother. In blink-and-you-miss-it speed, the Enchantress’s brother is on screen.  Essentially, she’s wandering around talking to herself so we know why the supernatural being doesn’t like humans. When don’t supernatural/extraterrestrial beings hate humans? They want earth for themselves, ‘nuff said.

When do we have the male villains explain to the audience why they are evil? Isn’t “show don’t tell” writing 101?

The trope of the male villain “plot reveal” at the end of some 007 movie popped into my head. “Mr. Bond, before I kill you in some elaborate way, I must make you understand why it is I’m doing what I’m doing.” The only movie I have ever enjoyed with a scene like this was Austin Powers: The Spy Who Shagged Me.” The scene had Seth Green call Dr Evil a dumbass for not killing Austin Powers right there. “I’ll go get a gun, we’ll shot him together.”

Males villains explaining their motives felt absolutely absurd to me.

Enchantress is no where near the protagonists; she’s not threatening to kill someone. This scene isn’t a “plot reveal” to the protagonist at the end of the film. This scene is telling the audience, “this is the plot.”. I would feel my intelligence had been insulted if the rest of Enchantress’ lines didn’t nearly exclusively consist of 1) asking her brother for help 2) describing how she would get more power and 3) addressing her enemies with pet names.

Saddened, I asked myself, “Will Enchantress’ brother make her more powerful and will she make a corresponding outfit change?”

My hopes weren’t high to begin with. The movie had more obnoxious flaws.  My drunk self and I moved on. 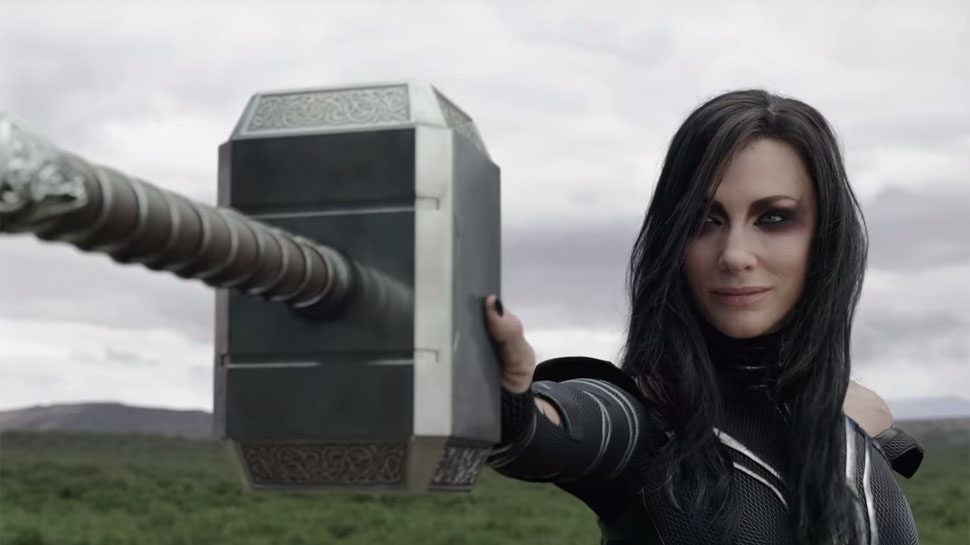 The next semester, I saw Thor: Ragnorok on an awkward date. The movie was awkward because my date kept trying to eat my face and … I was an adult in a public place. I was also relatively sober. (Gotta keep your wits about you in case your dates decides to kill you.)

The bar after the movie was awkward because I lost my shit about THE GODDESS OF DEATH. Here, I made the date awkward. I could not stop talking about how awful the Goddess of Death was in the movie.

At the onset I want to point out Hela, Goddess of Death is played by Cate Blanchett who has portrayed Queen Elizabeth I and Galadriel (It’s a Lord of the Rings thing; suffice to say Tolkien describes Galadriel as “the mightiest and fairest of all the Elves that remained in Middle-earth”). Basically, Cate Blanchett can portray powerful badass women so the acting wasn’t my issue.

My issue requires a preliminary question; would anyone wonder why the God of Death is a bad guy? Would people take seriously a God of Death who pauses to justify themselves? Would Seth Green pop on screen to tell them how incompetent they were? Sure, Loki had his feelings hurt, but also Loki is a spineless sack who the good guys can easily use. He’s a school child that has to be slapped in line.

How did the addition of “dess” to “god” change what I needed to know about the character? And how much of the movie focuses on telling Hela’s backstory? Odin warns she’s coming. The Valkyrie has a flashback sequence of a war. Hela herself explains out loud while redecorating the palace to show pictures of her feats.

Why were male villains terrifying while female villains felt more like power hungry Mr. Rogers? They really seemed to want me to be their neighbor. Hela barely speaks without saying “darling” – I can believe she really cares about me. Thank god (not goddess) her maternal instincts are intact.

I hated every scene about Hela, the Goddess of (Goddamn) Death. The goddess begging me to take her seriously.

What were the writers thinking when they were writing the script?!

Is being the Goddess a Death enough for the audience to accept her as the antagonist?

Hmm, probably not. Make sure she’s the oldest and is trying to inherit Odin’s throne.

Oh! And we can say she has daddy issues because she fought for his approval and he still disfavored her.

Ok, but how did she fight for his approval?

This is great – a man did this to her. How do we work it into the script? Do we use the Valkyrie’s flashback to outline it?

That might be kinda late in the movie… people might lose interest in the movie if Hela’s evilness isn’t explained early. But we should definitely allude to it there; we have to stop people from forgetting she’s a worthy foe for Thor. Where is the soonest we can tell the audience about her?

I suppose we can put a scene of her redecorating the castle and talking out loud about her daddy issues?

I forgot she has to redecorate! We can even have Thor make fun of her for it! But why is she talking out loud?

Oh! she’s grabbed one of the guards and he’s following her around and she’s telling him.

Awesome. Nothing at all odd about the god super villain being emotionally vulnerable with a character who’s basically a stormtrooper.

We’ll just make him a comic relief so the audience likes him and forgets how useless he is.

Sounds good. Don’t forget to make sure she changes her outfit when she gets more powerful.

I think my disdain for Thor: Ragnorok is largely because it made crystal clear my fear was true: We’re justifying female villains. We present an excuse for their behavior highlighting the lack of agency audiences will naturally allow the character. We frame female villains to make them easy to swallow. “She’ll destroy the universe but she won’t step on any toes.”

Not only are we confined to gender-based backstories, we require the villain to explain herself to us. The audience is asked to be a judge and jury of whether this villain is legitimate.

I wonder how much hatred the Goddess of Death would conjure in an audience if she refused to talk about her personal life? (The only real-life female trying to obtain power I can think of is Hillary Clinton running for President. I don’t remember her talking about her feelings but I recall people hating her guts.) Don’t we want audiences to hate the story’s villains? Isn’t the striking contrast between good and evil a large part of superhero stories appeal? Can’t we stfu about why a female is a villain and let audiences hate her for what they don’t know about her?

Not knowing the why of a villain only raises the suspense and the stakes for the audience. If the audience only knows what the heroes know, the audience’s perspective is more aligned with the hero (whom we all desire to be) and have an increased fear of misinformation: what if the heroes, who the audience is living vicariously through, is wrong?

Real life female baddies rarely garnish as much media attention as their male counterparts. When they do, the media focuses on their looks, their sexual deviances, and their narcissistic ways. The novelty.

Amanda Knox (in Italy, in America she was a damsel in distress)

Whatever strides we make towards gender equality, we will not achieve it until we can fathom that women are, inherently, just as bad (or good) as men.

In the name of equality say it with me, “Women can just be as evil as men. In fact, people are just people and sometimes they’re shitty.”