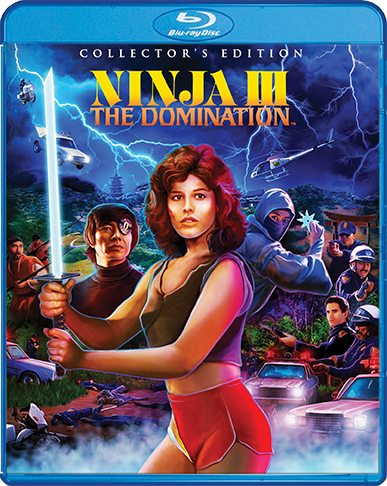 Back in 1984, the world was given a movie by the name of ‘Ninja III: The Domination‘, which was the third film in a trilogy. If you were to go back and watch all three Ninja films, you’d be hard pressed to find a similar tone or continuity throughout each of them, minus a small ninja aspect. After the first two ‘Ninja‘ films, it was time to throw everything in the bag, including the kitchen sink, which eventually became ‘Ninja III: The Domination‘. The movie plays out like Hunter S. Thompson wrote it over a drug-induced bender in Vegas, but only had a few dollars to make the film that is a mix between ‘Breakin 2: Electric Boogaloo‘, a horror film, and the wackiest Kung-Fu movie this side of the Mississippi. In fact, the star and director of ‘Breakin 2: Electric Boogaloo‘ also star and direct ‘Ninja III‘, which makes perfect sense when you think about it. This is a film that I imagine had fantastic intentions and thought it was going to be the biggest blockbuster ever made, but the results gave us something much more. It gave us a movie that was so beyond weird and insane, that cult audiences around the world fell in love with it and keep it alive still to this day.

The entire first 10 or 15 minutes of the movie takes place on a golf course, when a ninja appears on the putting green out of nowhere and begins to attack and kill bad guys. A police chase in golf carts, motorcycles and vehicles ensues, where the ninja fights off every attacker, despite being shot many times. In a smoke grenade flash, the ninja vanishes into thin air, complete with hilarious one-liners. It only gets better from there. Meanwhile, a woman who works on telephone poles by day, but is an aerobics instructor by night sees this ninja struggling, goes over to help, but gets more than she bargained for.

The soul of an evil ninja has passed into this lady who seeks revenge for the fallen good guy ninja against his killers, thru the body of this aerobics instructor. Needless to say, there are exorcisms, dancing, swords, and kung-fu to be had by all. If that weren’t enough, Lopan from ‘Big Trouble in Little China‘ shows up for a cameo this is all sorts of fun too. ‘Ninja III: The Domination‘ is one of those rare movies that is to weird to be believed, but is none-the-less a ton of fun and highly entertaining.

You have to appreciate the filmmakers here in that they showed no boundaries and used what they had to make a wild film on their own terms with no studio involvement. This is the definition of pure joy and fun filmmaking, which transfers on to its ever growing audience. There’s no way you don’t have a good time with this film, as it continues to make me smile.

The Video: This collector’s edition from Scream Factory of ‘Ninja III: The Domination‘ comes with a new 4K scan from the original elements from 1984. Needless to say, the movie has never looked better than this. The image looks bright, sharp, and vivid in all areas, which is a huge improvement of when it first release all those years ago. The detail shows facial pores and individual hairs on the actor’s faces, as well as the cheap practical makeup effects of gory wounds and blood, which should make you laugh. Textures in the costumes show the fine stitching and other background elements very well, which never really go soft.

Colors are more vibrant this time around too, with deeper greens and bluer skies in each frame. The blood is unnaturally red, but that’s part of the fun here. All colors are evenly balanced and never look muted or pale. Black levels are deep and inky as well with the skin tones all looking natural this time. There is still some minor wear and tear here with debris and scratches, but it’t mostly cleaned up. It still has its filmic look, but never fluctuates with its grain. This is the best this film has ever looked.

The Audio: This release comes with a lossless DTS-HD 2.0 mix, which does it’s job well enough. Sound effects are loud and robust with a bit of low end here and there. The kung-fu sound effects never sound realistic, but that’s part of the whole experience. In fact, each of those sound effects might be the same effect, which is quite funny. The score always adds to the silliness of the whole picture as well. It’s not a fully immersive track, but it gets the job done nicely enough for the type of movie it is. Dialogue is clear and easy to follow as well, along with zero pops, cracks, hiss, and shrills.

Audio Commentary – Director Sam Firstenberg and Stunt Coordinator Steve Lambert deliver a fun and informative commentary track here that is funny and a good listen. They have a ton of stories about their careers and making this film. It’s worth the listen.

Dancing With Death (HD, 19 Mins.) – Actress Lucinda Dickey gives a great interview about her life, career, and work on the film, as well as other Cannon movies. It’s fantastic stuff here.

Secord’s Struggle (HD, 11 Mins.) – Actor Jordan Bennet talks about working on the film along with coming up with ideas for the movie. Solid interview.

Birth of a Ninja (HD, 12 Mins.) – Here is an interview with the producer and stuntman Alan Amiel who is straight laced and serious. It’s informative, but not very fun. Also, I think Alan is unaware of why people love this movie.

Trailers From Hell (HD, 2 Mins.) – The trailer plays out while a guy yells out trivia about the film.

Audio Commentary #2 – Isolated Score with audio interviews and commentary with Misha Segal and Elliot Ellentuck on the making of the film. 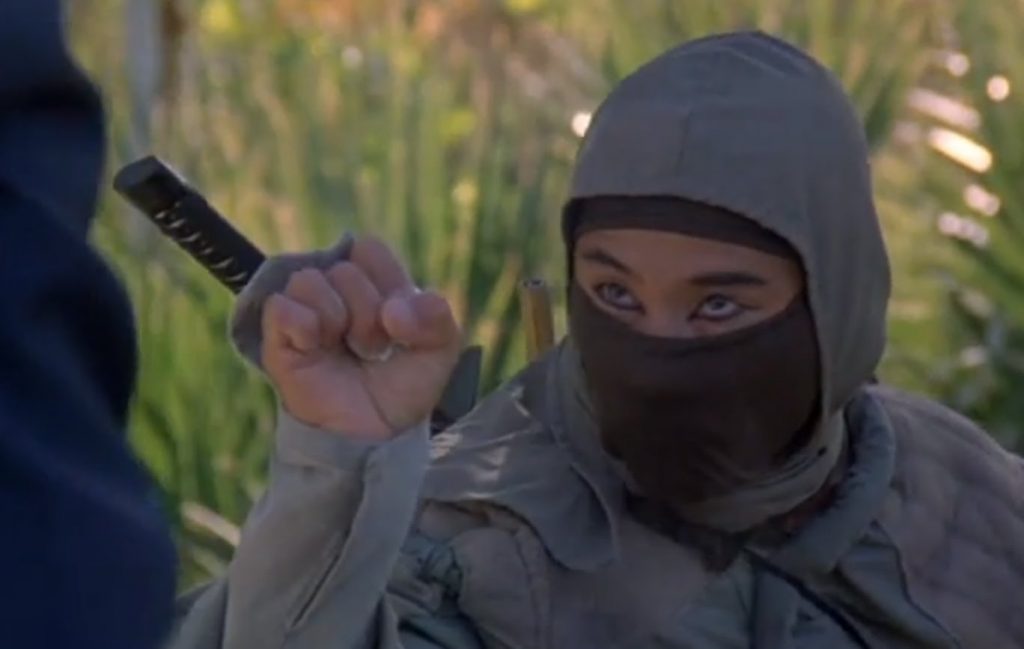 ‘Ninja III: The Domination‘ is one of those films that come along once in a lifetime. You’ll never see anything like it again. It’s wild, wacky, entertaining, and ton of fun. You have to be in the right frame of mind to watch something like this, or you won’t enjoy it and you won’t understand the pure genius that is ‘Ninja III: The Domination‘. The video and audio presentations are both top notch and Scream Factory has done an incredible job with the bonus features here. This is one movie you don’t want to miss out on. Highly Recommended!