I can’t believe it’s been 17 years since Broken Lizard made us love a group of Vermont State Troopers that seemed to not only solve major crimes, but have fun while doing so in their debut hit film from 2001, ‘Super Troopers‘. The improv comedy troupe of Broken Lizard have all gone on to be very successful as actors and filmmakers in film and television, and I’m so happy to tell you that everyone has come back for a sequel some 17 years later in ‘Super Troopers 2‘. Watching the original ‘Super Troopers‘ today, I can’t help but laugh the same way as when I first watched it in theaters. It still holds up, which is something rare in comedy. You never know if something is still going to be funny years from now, as we’ve seen with certain Adam Sandler films or the Scary Movie franchise. ‘Super Troopers‘ is not that way, at least not yet, and every time I watch it, it remains as funny as it was in 2001. Now is ‘Super Troopers 2‘ funny as hell? The answer is best said as “a Large Farva YES”.

I had my doubts for sure going into this sequel, but in the first 10 seconds of the film till the end credits, I laughed out loud the entire time, so much so that my cheeks hurt from laughter. I’m gonna say it already, ‘Super Troopers 2‘ is the funniest film of the year and I haven’t laughed that hard or often in a film in quite some time. The group of Broken Lizard has not lost a comedic step in their timing or ability to make us laugh with these iconic characters. 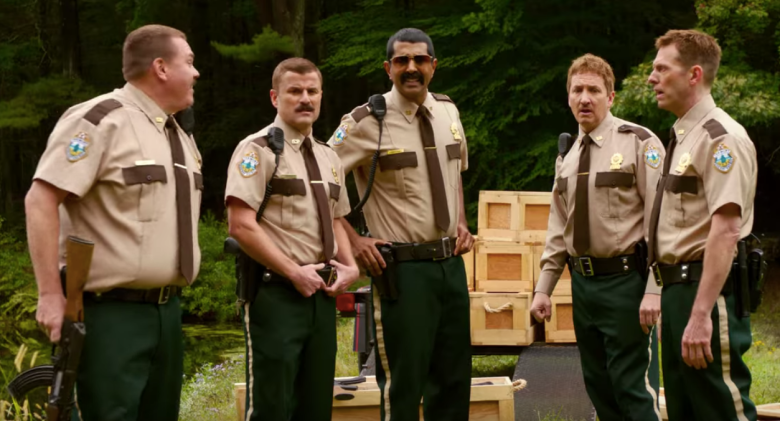 In a nutshell, the former Highway patrol, turned police officers, are now construction workers under their boss Rod Farva. It just so happens that a part of Canada right near the border of Vermont is actually U.S. territory, which puts our favorite Highway cops back in their former jobs, mustaches and all. All seems pleasant in this small Canada town, but the local law enforcement mounties don’t take kindly to their replacements. With pranks going back and forth and the mayor of the small town (Rob Lowe), having a unique lifestyle keeps the Highway Patrolmen on their toes. However, when they come across a secret stash of drugs, the plot thickens and the comedy can do only one thing – “Enhance”. 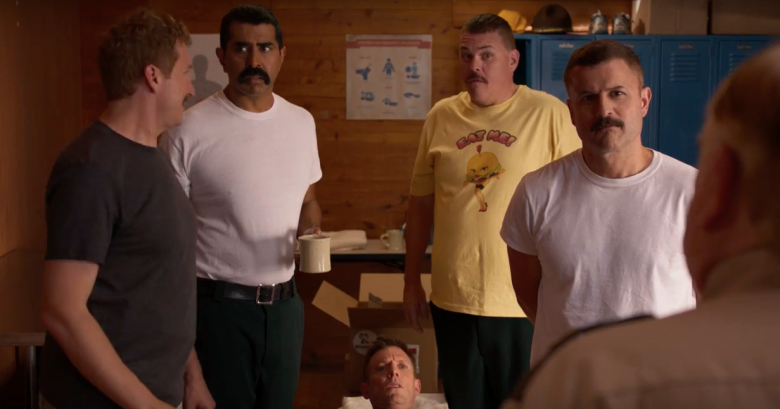 It’s more or less the same story as the original, but that’s not a bad thing whatsoever. We are all here for the hilarious hijinks these guys get into as well as some of the funniest jokes and dialogue I’ve seen on screen in years. I was a happy camper at the end of the movie in that Broken Lizard had made not just a good sequel, but a great sequel that is just as funny as their first film, if not better. Again, ‘Super Troopers 2‘ is the funniest film of the year and will most likely take that title come December as well.