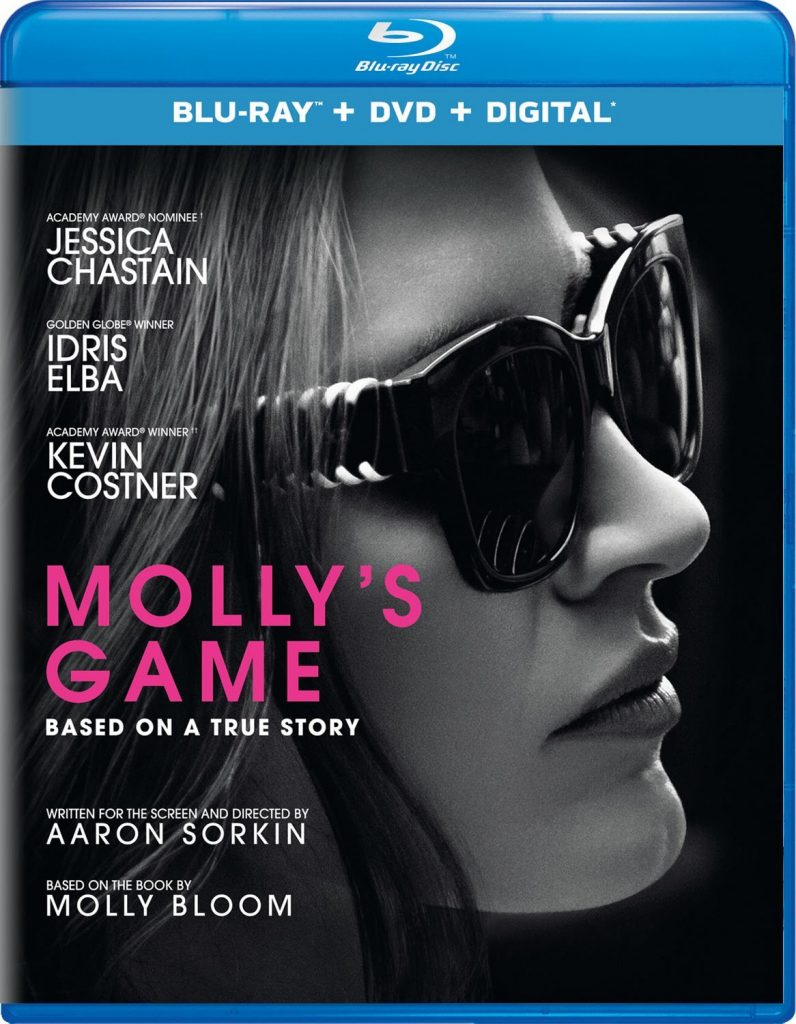 (This film portion was written by Beka Perlstein)

Do you have a girl crush on Jessica Chastain? Do you have a man crush on Idris Elba? If you have any combination of the two, Molly’s Game is going to make you have all the feels. This is a well done film with all the right players and script that packs a punch. Aaron Sorkin (screenplay and first time director) has taken the novel Molly’s Game and turned it into a film that at a run time of two hours and twenty minutes seems fast paced and doesn’t waste your time. While I know literally nothing about poker, this movie kept me entertained and engaged because the story wasn’t the game-it was the players.

Molly’s Game is the true story of Molly Bloom who was an Olympic skier turned poker game runner for Hollywood A-Listers, investment tycoons, real estate moguls, and anyone else that could buy in. It was the most exclusive private game and Molly was the boss. The film follows her from childhood to her Olympic trials, through how she begins to build this game and ultimately how she becomes a target of the FBI. It seems like fiction, but part of the thrill is that you know it’s based in reality. Jessica Chastain plays Molly and she is glorious. I am not a devout Chastain lover, as I haven’t loved her in every film, but I have to say that her performances in Miss Sloane and now Molly’s Game have given me a major girl crush. She kicks ass and takes names all while managing to be vulnerable, have faults and mess up in colossal ways. In other words: she’s a woman.

Idris Elba plays her lawyer, Charlie Jaffey, a former federal prosecutor, who begrudgingly takes her on as a client despite her having lost all of her money from a federal seizure. One thing I liked about the film is that I found the legal aspect to be painfully accurate. From her arrest to her arraignment to the bargaining tools of the Feds, this is how they work. Elba, like Chastain, has some great scenes. The script is written so well and so on point at times that if you laugh too long you may miss the next great line.

What I really enjoyed about the film and what has stuck with me in the days after viewing is how her relationship with her father, and men throughout her life were transformative for her. Her father, played by Kevin Costner, pushed her to her limits as a child and a teen and it’s until her adult years that she identifies what the true issues were between them. Throughout her interactions with A-List or incredibly wealthy men, Molly is told over and over again that she is disposable- that she is irrelevant. They use their wealth, their positions, their clout or their power to try and pigeon her into a hole or keep her in the corner that they are comfortable with, but Molly does not fold. (You guys see what I did there, I learned some stuff in the film). She refuses to be a minor player in her own life.

This is a great film- for poker lovers, for badass boss babes, for fans of Aaron Sorkin’s quick wit, and for anyone who is crushing on Chastain and Elba. That list is not all inclusive as I believe it’s really a film worth seeing regardless of who you are. It’s Christmas, so escape your family- or bring them along- and check out Molly’s Game. 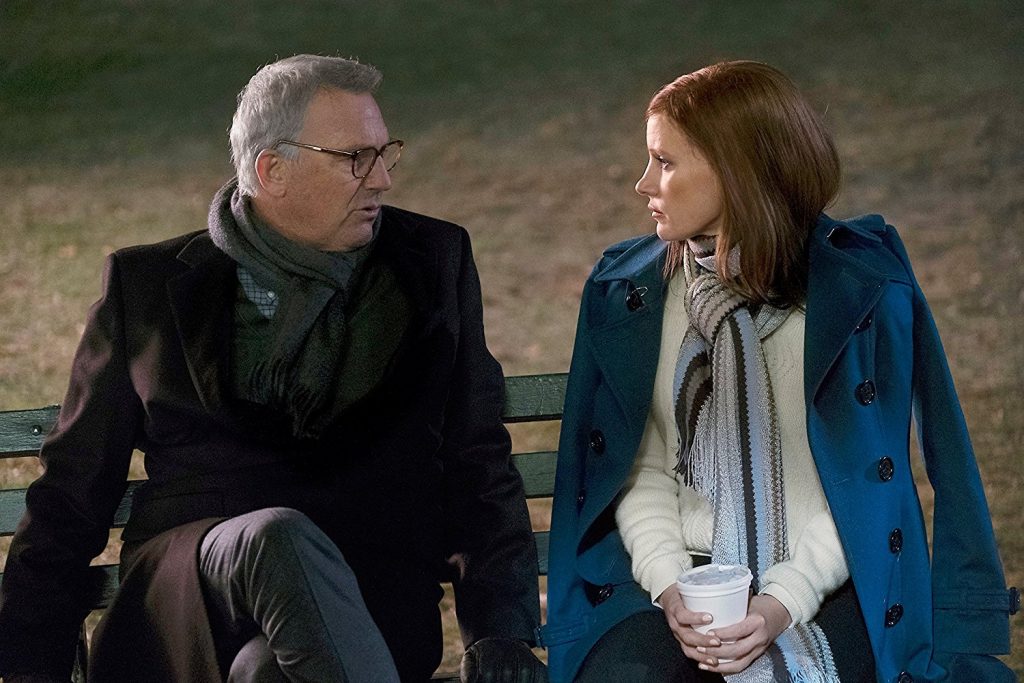 The Video: ‘Molly’s Game‘ comes with a 1080p HD transfer and is presented in 2.40:1 aspect ratio. The image is strikingly sharp and colorful at most times. Colors are deep and bright with dazzling lights in the hotel rooms that light up all of the fancy outfits on the poker players. The primary colors are well-saturated and ooze color in each scene. There is a good mix of warm and cooler colors in offices, dark apartment hallways, and nightclubs. The neon lighting is quite bright as well and always defines the foreground well.

Some of the quick flashbacks have a yellow/greenish tint to them, but they never hinder any detail and is a good stylistic choice. Black levels are always deep and inky and the skin tones are very natural. Detail here is extremely vivid where closeups reveal individual facial pores, freckles, hairs, and stitching in the expensive dresses and suits the poker players wear. Background items never go soft either and there are no instances of any banding, aliasing, or video noise. This is a great looking video presentation.

The Audio: This release comes with a lossless DTS-HD MA 7.1 mix and sounds very good for not being a big action blockbuster film. This is an extremely heavy dialogue film, given that it’s Aaron Sorkin at the helm, but the surrounds to pick up the packed poker tables and rooms very well that ooze out players talking, drinks being made, poker chips being stacked, and more.

The bigger scenes at nightclubs always bring the bass in a hefty way too, which provides a good low end. The dialogue is always clear and appropriate for the setting with some good directionality. There were also no pops, cracks, hiss, and shrills, leaving this audio presentation with good marks. 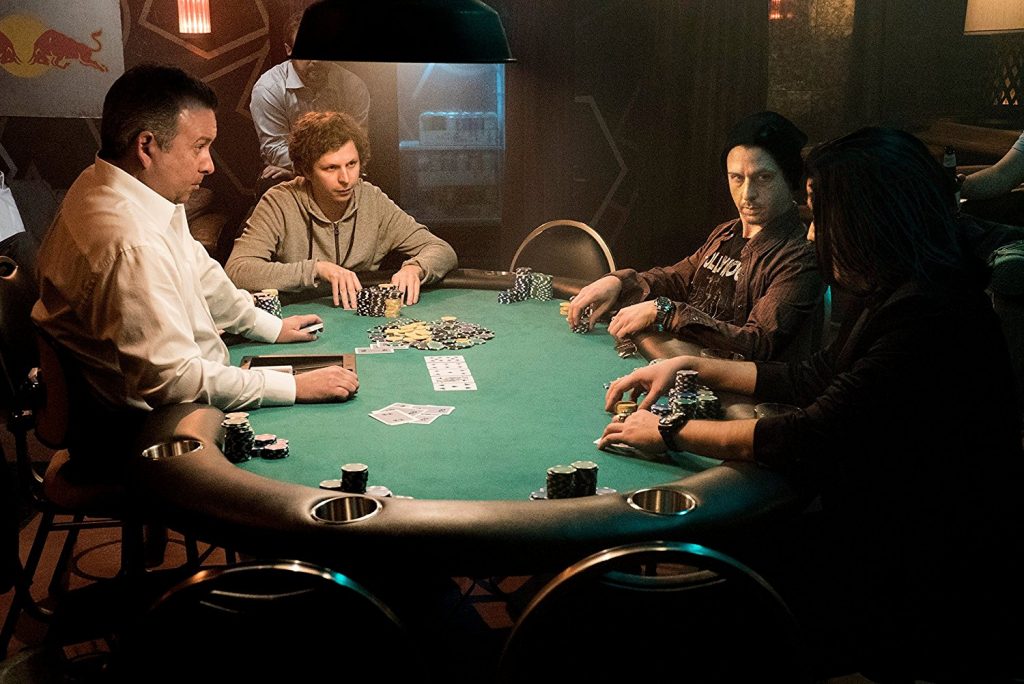 Building an Empire (HD, 3 Mins.) – A trailer for the film with some very quick interview snippets with the cast and crew. Nothing worth watching here. 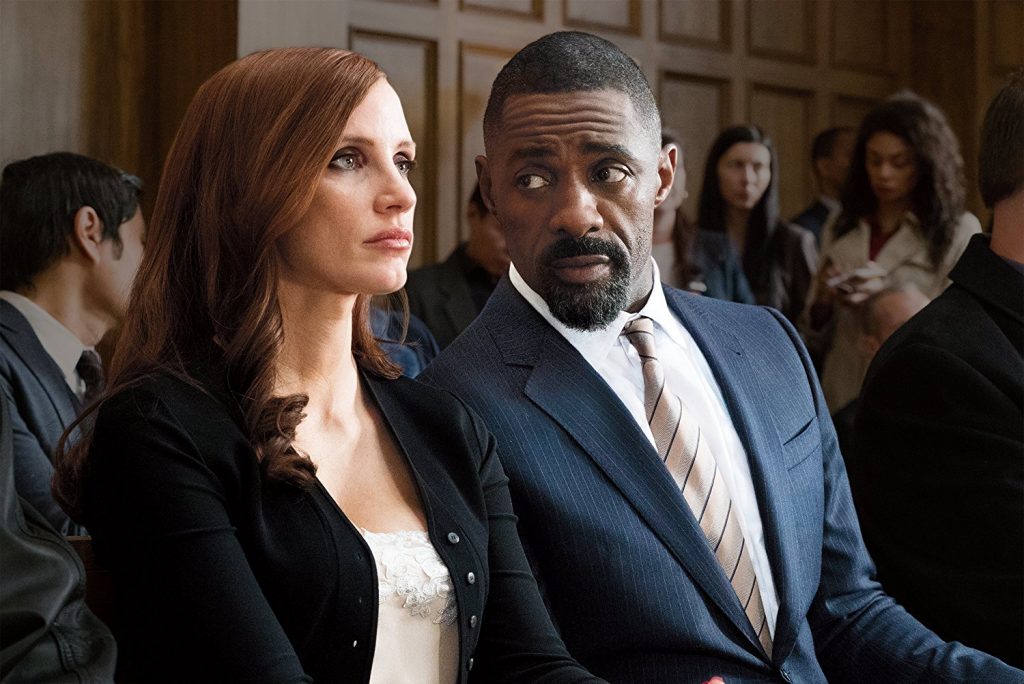 ‘Molly’s Game‘ is a very good film, but it drags quite a bit with a run time of 141 minutes. Easily, 20 minutes could have been cut out here, because the pacing was a bit slow here and there, which is odd for an Aaron Sorkin film. Still, this true story was worth telling, if only to show what Hollywood Elites are actually terrible people in real life. The video and audio presentations are both top notch here from Universal, but there is really no bonus features here, although it says there is. The only feature is a trailer for the movie with a couple of tiny snippets of interviews spliced in. I’d say wait for Netflix for this one.