When preparing to make a movie, short film, or TV series, there are quite possibly a million things that you will have to decide on and plan in advance to get the ball rolling to execute your vision on screen. Actors, crew members, marketing, sets, props, makeup, hair-styling, food, lighting, cameras, and tons of other aspects are required to make a movie. Unless you’re making a movie in your own home, by yourself with your iPhone, I’m willing to bet your film – no matter how big or small it is, will require you to pony up some money for it to be made. Now, pretty much all films have a budget. A budget can be as small as $5000 or can be as huge as $250 million. You’re going to have to budget and not go over your budget in order for you film to work. So how can you work out a film budget on paper that shows where all the money is going to? Usually, you would hire someone for that, but there’s a new app in town called ‘Film Budgeteers‘, which essentially does all the work for you.

‘Film Budgeteers‘ is an app/software program that you can purchase for around $100 that allows you to plug in your information and it will deliver an extremely detailed and itemized spreadsheet and list of where all of your money is going. This is all possible by the software asking you a few questions about your project. It’s a super laid back and painless process, which will give producers and directors an easier time and less heart ache so they can focus on the creative side of things. By going to their website FilmBudgeteers.com, there is a Google-like questionnaire that asks you a few questions about your project. I got the chance to use the program for my own project and I was completely blown away and beyond satisfied by the detailed report and will definitely use this program in the future for other projects. 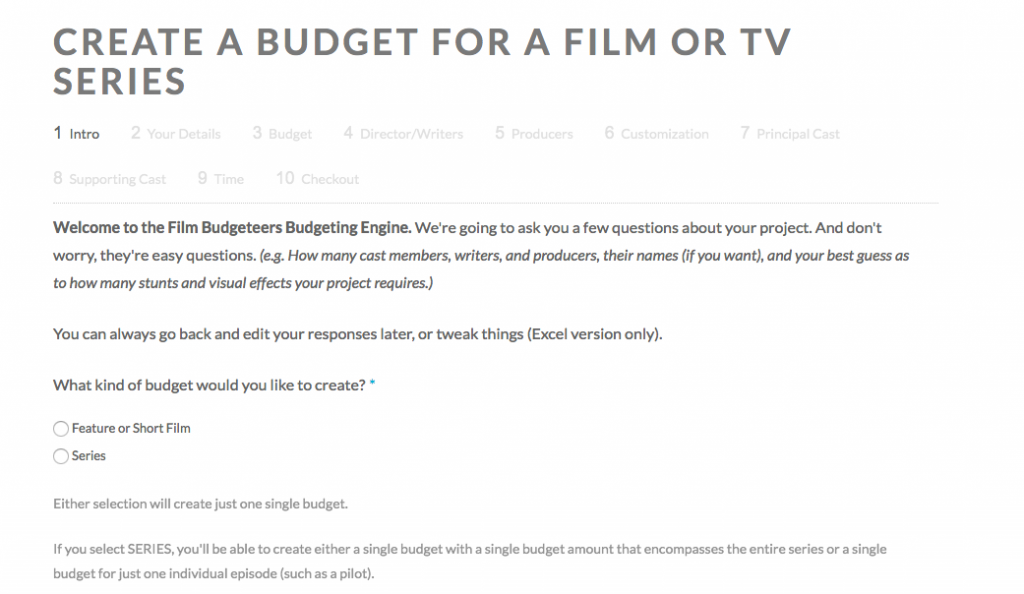 HOW TO USE IT

I filled out the title of my feature length movie, which you’ll be able to choose options between a TV series, short film, and feature film. Again, I chose feature film and set a $10 million dollar budget, which is relatively low and is comparable to what Blumhouse gives their filmmakers for their films. After you set your budget, you will be able to choose how many directors, producers, and writers are contributing to your film. You’ll be able to list their names out as well. After that, you’ll be able to customize your budget, pertaining to what kind of film you’re making. For example, if you’re making a horror film that will require a ton of blood and guts, and visual effects, you can adjust the percentage of what you might need to accommodate those aspects. If that’s not in your film, you can adjust other details, such as on location shooting, filming on water, vehicles, stunts, lighting, and any other production that may come up.

After this segment, you’ll be able to list out your actors and supporting actors. From this, you’ll get a sense of how many people you’re working with, as well as if you need any extras. It all adds up for sure, but is a great way to see who and how much people are getting paid. After this segment comes the time. How long will the shoot take, re-shoots, edits, and post production. You can enter in anything you want here, and this program will balance it all out to your schedule. After that, you’re all done and ready to check out. Once you pay the inexpensive fee of less than $100, the site will almost immediately send you your finalized budget in both PDF forms and Microsoft Office Excel form, which you can translate to Apple Numbers. 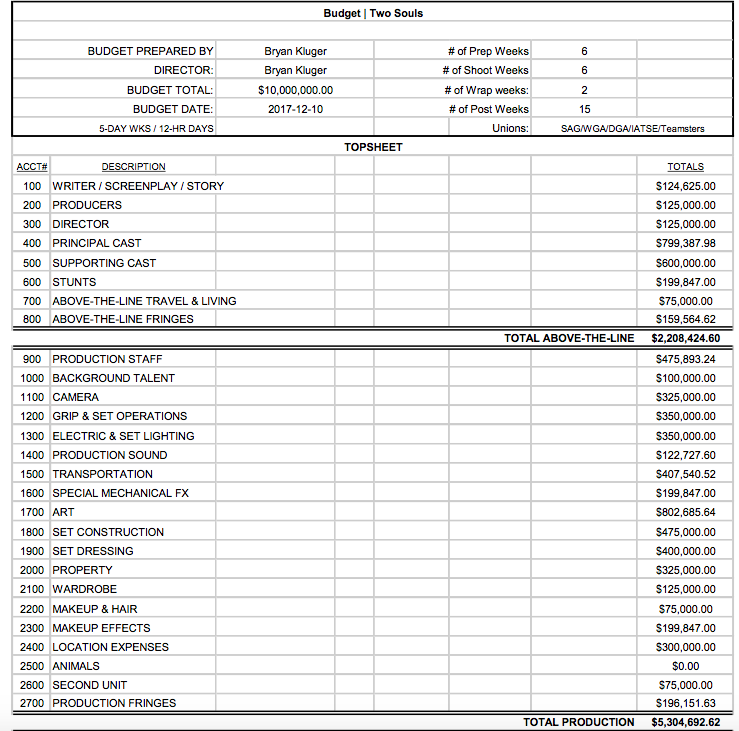 The result is a very detailed spreadsheet that lists everything out and will help you and your producers know how much you can afford. You can always add to this or take away anything. Again, you would be paying someone thousands of dollars to come up with a detailed and itemized budget such as this. With Film Budgeteers, you can spend less than $100 and get the same thing, all without the hassle. This is truly a remarkable app, and one that I will be using in the future for sure. If you filmmakers are looking to get a movie together with a budget and need to get everything down on paper for a bank or investor, ‘Film Budgeteers’ is the program to do it. It’s easy to use, super fast, and highly detailed in its results.