Natural disaster films will always have a special place in my heart. Most of the time, they are over-the-top, ridiculous, and never make a lick of sense. Still, there is something entertaining in watching giant cities fall due to an alien invasion, a giant lizard, or is with the case of ‘Geostorm‘, extreme weather. No matter what the premise, these films usually have the same intentions and plot structure, which usually involves one hero guy to save the day, millions of casualties, hilarious one-liners, and enough insane plot tangents that would cause you to have a headache.

If you’re going into these types of movies, you’ll have to go in with a certain expectation, or you will definitely not enjoy it. You have to suspend all belief in science, realism, and plausible actions. If you do this, you’re gonna have a good time with what’s on screen. ‘Geostorm‘ is no different in this realm of movie genres. Behind the wheel on this vehicle is Dean Devlin, who is no stranger to natural disaster films. Devlin has written and or produced ‘Independence Day‘, 1998’s ‘Godzilla‘, and ‘Eight Legged Freaks‘ to name a few.

‘Geostorm‘ marks Devlin’s directorial debut and he pulls no stops, but fails short of anything worth while, despite the over-the-top catastrophe that takes place. ‘Geostorm‘ cost $120 million to make, but only made $33 million in theaters. It did far better overseas, which made back it’s money and then some, but has yet to find a big audience to to the incoherence of it all. In the near future, there have been major weather events that have caused significant damages and killed a lot of people. The world has come together and developed a satellite system that prevents the storms from happening by firing missiles into the storm.

The brains behind this operation is Gerard Butler, which should tell you everything about this movie. For some reason, Gerard Butler is difficult to work with and is fired from this job where his younger brother Jim Sturgess replaces him. For the next few years, the satellite system works perfectly, until it doesn’t and major cities fall and many people die by way of car sized hail, fire tornadoes, and even an ice storm in the desert that instantly freezes people to death. Turns out, there is a mystery person behind this who has injected a virus into the satellite system to cause these problems. It’s now only up to Gerard Butler to travel to space and even kidnap the president of the United States, played by Andy Garcia to fix this problem. Mix in some henchmen, far-fetched theories, and Ed Harris, and you have a natural disaster picture that is highly entertaining and equally hilarious.

None of it makes sense at all. You’d think that Dean Devlin would have known through years of experience to make solid and well-rounded characters or even frame a bit of action well, but that’s not the case. The visual effects aren’t that good and the action beats of extreme weather and cities falling never really put you in the action. In fact, all of this you’ve seen before in past Marvel films or other disaster flicks. All this being said, if you’re a fan of these ridiculous films, then ‘Geostorm‘ is for you, the same way ‘Sharknado‘ would be.

The Video: ‘Geostorm‘ comes with a 1080p HD transfer and is presented in 2.40:1 aspect ratio. The film of course was shot digitally and has a great looking image with sharp detail and boastful colors in most scenes. The film is steeped in CGI work from the big city skyscrapers crumbling down to the fire tornadoes that ravage them. As far as detail is concerned, the space station and its satellites look incredibly detailed, but when it comes to the extreme weather and buildings collapsing, I’ve seen better. Those CGI tornadoes and tsunamis look soft without the natural elements coming through, which is unfortunate.

Details on the actor’s faces look better though with individual hairs, scars, and wrinkles coming through nicely. Colors are bright and fluid throughout as well. The fiery oranges and reds light up the screen as well as the blue oceans and greenish waters scoop up the landscapes. Black levels are deep and inky and the skin tones are natural in all lighting conditions. There are no major instances of any banding or aliasing either, leaving this video presentation with solid marks.

The Audio: This release comes with a lossless DTS-HD MA 5.1 mix and comes with the usual bangs, thuds, and thunder you’d expect with this type of disaster flick. That being said, it’s all about the loudness of the soundscape and not about keeping things quiet or dynamic in the softer sounding moments. Every large piece of hail and falling debris sounds big and explosive with thunder and rain brining a great surround sound activity.

The moments in outer space sound quite good as well, but in quieter settings, things are still rather loud with little to know ambient noises in the background that would provide the necessary sound experience. The score always adds to the action beats nicely while keeping tensions high, and the the dialogue is always crisp and clear, with zero pops, cracks, and hiss to speak of. 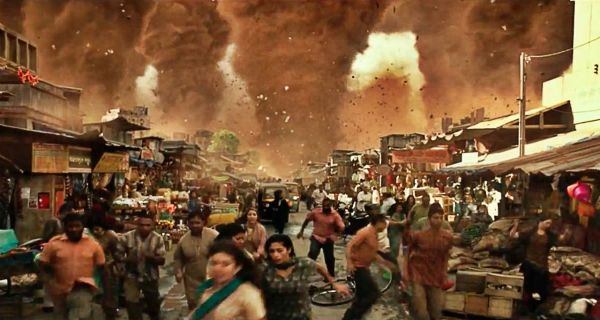 Wreaking Havoc (HD. 7 Mins.) – This cool supplement discusses which major effects were done with  CGI and which ones were done practically.

The Search for Answers (HD, 4 Mins.) – A weird extra in which Dean Devlin and his daughter talk about the origins and root of the story.

An International Cast (HD, 6 Mins.) – This discusses the casting of the film, specifically all of the international talent they hired here in hopes of a bigger box office overseas. 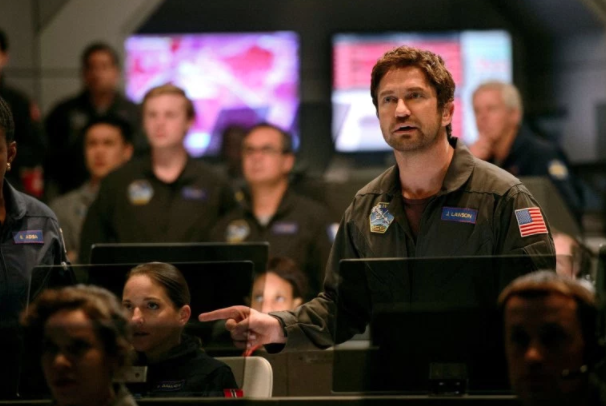 There is some fun to be had with ‘Geostorm‘. You have to be in the right frame of mind an d have a giant bowl of popcorn or alcohol though to enjoy it. None of the characters or plot devices really make any sense and every piece of dialogue and action beat is beyond ridiculous and over-the-top. Still, it’s a lot of fun and can be quite entertaining for the right audience. The video looks good, even with the average CGI work and the audio is very loud throughout. The supplements don’t add a ton of insight, but there really doesn’t need to be here. For Fans Only!