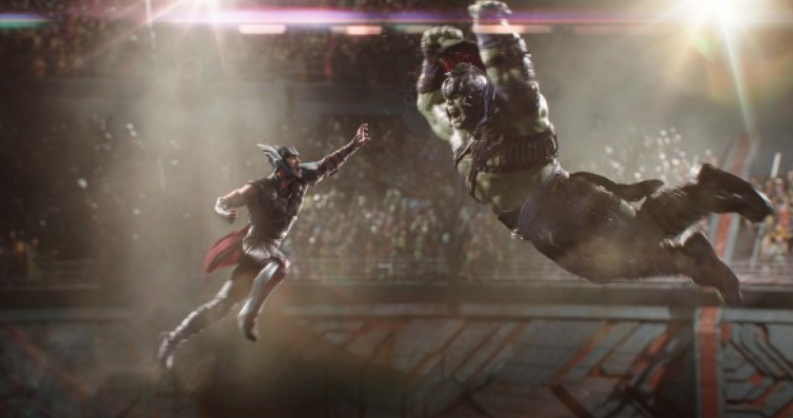 Taika Waititi legitimately reinvigorated  the marvel brand with Thor: Ragnarok. A lot of the criticism that Marvel movies get is that there are no stakes and we know that the heroes will always win. No kidding? That’s every superhero movie. No one thought Iron Man would die, no one thought Cap would die, no one thought Batman was dead in TDKR, no one thought (cared?) Superman died in BvS. Waititi proves that not taking a paint by numbers destroy the world story too seriously can be a damn blast.

This year, Marvel has flexed its muscles in the genre sense. Spider-Man Homecoming was essentially a high school coming of age rom-com featuring Spider-Man. Thor: Ragnarok is a quirky buddy comedy set in space. Everyone knows that at some point Thanos is coming and a fight to end the universe will start but in between it has been nice to see some of the films stand on their own and at least feel different.

The broad plot in this Thor is that Hela: Goddess of Death is returning to Asgard to destroy it. She destroys Thor’s hammer first and he is sent to a trash planet where he meets up with the Hulk. Thor assembles a team to escape the planet and try and stop Hela. There. See? Paint by numbers. It’s Waititi painting outside of the lines that makes this movie great. It is also a credit to Chris Hemsworth who displays some of the best comedic timing and reactions of any movie outside Tiffany Haddish in Girls Trip this year. Hemsworth is on another level. His mannerisms alone breathed new life into the character and even though we won’t get one, I’m in for Thor 4.

Mark Ruffalo and Cate Blanchett were pretty fantastic too. Blanchett clearly was just excited to be working with Waititi and she remains menacing while delivering two lines that actually caused me to laugh out loud. The best addition was Corg? Korg? A rock creature Thor meets in the gladiator pit. Strictly there for comedic effect he had some lines that had my audience laughing so hard that I missed his follow up quip.

I would be doing everyone a disservice if I didn’t confirm that Jeff Goldblum was the most Jeff Goldblum I’ve ever seen and that is a damn compliment. I’m not even sure he got a script. He may have just been given cliff notes of the scene and been told to run with it.

My only complaint was that the final VFX seemed a little too glossy. I understand a bunch of creatures were fighting on a rainbow bridge on a fake planet but I’ve seen better effects.

All in all, Thor: Ragnarok was a blast. It made Thor one of my favorite superheroes ever for 2 hours and that’s pretty impressive on its own. If Marvel continues to do these little one off genre experiments with talented directors then the characters will continue to hold my interest. I love that James Gunn opened the door for the cosmic side of Marvel to be much looser than previous films. Even with the “fun” & “mindless” Thor I am still fully invested to the threat teased in the post credits scene and believe that Thor can still be serious when needed. That’s an impressive feat.