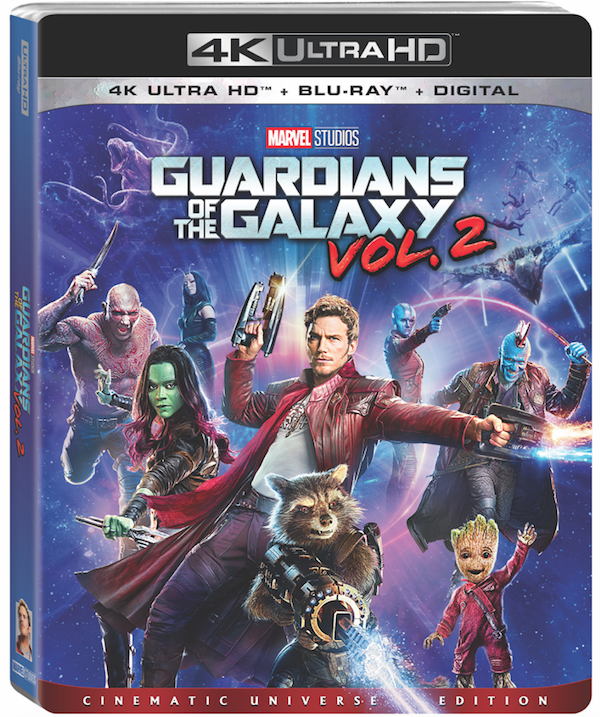 First off, my favorite Marvel Cinematic Universe film is ‘Guardians of the Galaxy‘. I love the weird, oddball, and sometimes anti-hero characters so much, the dialogue, and the feel of the whole movie, that I really connected to it and enjoyed it on every level. This group of heroes are not the norm and I relish in all their conflicts, endearing moments, and witty banter. That brings us to Vol. 2 that reunites all of our favorite characters as they go on missions to save the galaxy.

Running at about 15 minutes longer than the first installment, Peter Quill (Chris Pratt), Gamora (Zoe Saldana), Drax (Dave Bautista), Rocket (voiced by Bradley Cooper), and Baby Groot (voiced by Vin Diesel). Right from the opening scene, that famous brand of musical energy and comedy from the first film is evident, which is a good thing here. It brings up that thrilling and energetic feel that makes you smile and laugh instantly again as our Guardians battle a space enemy. Some familiar faces also show up Nebula (Karen Gilliam), Yondu (Michael Rooker), and Kraglin (Sean Gunn), along with some new faces.

For a lot of the film, the Guardians are split up in different parts of the galaxy, which gives us some more intimate time with each character, both old and new as Peter meets someone from his past and Nebula and Gamora come to terms with their sibling rivalry. The action pieces are on a large grand scale with some winks and nods to another space opera called ‘Star Wars‘. In fact, there were several moments when I thought the characters would actually look at the camera and wink at us and whisper “Star Wars“. Of course the music selection is fantastic once again with a mix of popular tunes from a few decades ago and is basically its own character in the film.

Baby Groot always steals the show in each scene while Drax just kills it with every deadpanned delivery. There is a bit of some slow pacing throughout, which kind of drags down the film along with a ton of beautiful yet overbearing CGI. I miss the days when things were practical. With the slow pace even, you’ll still very much enjoy this second outing with all of these characters, even if it feels a bit of the same old thing as last time.

The thing that works is the chemistry, characters, and hilarious dialogue that brings ‘Guardians of the Galaxy Vol. 2‘ to a very entertaining place in your heart. Also, be sure to stick around for the FIVE end credit sequences. Yes, there are FIVE of them. Overkill? A bit much. 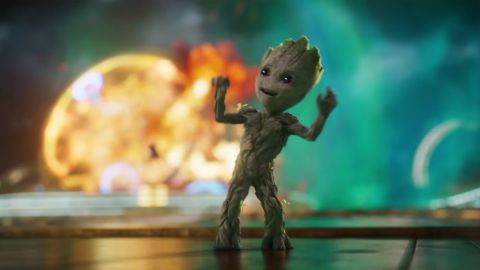 The Video: Guardians of the Galaxy Vol. 2 marks Disney’s first release in the 4K UHD format, and I’m happy to report that it’s excellent. This 4K release comes in 2160p and is presented in 2.40:1 aspect ratio. This 4K UHD version looks more realistic than it’s Blu-ray counterpart in my opinion, given a slight darker image to the vast reaches of space and other planets. Vol. 2 is full of billions of colors, even more so than the first film. From the many colorful planets, spaceships, aliens, and laser blasts, every color is rich, deep and simply pops off screen. The shade of blue on Yondu looks life-like and amazing in all lighting conditions. Peter’s red leather jacket is fantastic, as well as the bright gold aliens that chase after The Guardians throughout the film.

Every color is well balanced and saturated to realistic levels, never going over-the-top. It’s a beautiful film from top to bottom, which this 4K and HDR shows perfectly. Detail is very sharp and vivid, giving way to amazing textures on the actors and their locations and props. Look at Drax’s textured skin here. You will be able to see all his markings and scars easily, which looks fantastic. Other alien and plant life, as well as Rocket’s individual hairs and baby Groot’s roots look particularly great. Every small pore and leaf on him can be seen easily. Black levels are very deep and inky without any crush or shadows, and the skin tones are all natural, even the different colors of aliens that are abound. There were no issues with any banding, aliasing, or video noise to speak of, making this 4K UHD release and upgrade from the Blu-ray release.

The Audio: This release comes with an impressive Dolby Atmos track, which is a good upgrade from the Blu-ray’s lossless DTS-HD MA 7.1 mix. Those added height speakers truly immerse you in many scenes and sounds great. That scene where Yondu and Rocket are walking around the spaceship, where Yondu’s arrow is flying around and killing people is demo-worthy. You’ll be able to hear exactly where the arrow is all over the room, as it zips by every speaker, with whistling, contact on human skin, and other screams and reverbs from being in the large ship. It’s amazing to say the least. Other big action sequences pack a big punch with laser blasts, take downs, hits, kicks, and monster roars.

Ambient noises of other people talking and other alien life come through nicely and loud on the rear speakers, providing some excellent depth. The music of the film is magnificent, as it was in the first film, and just rocks the sound system each time one of those iconic 90’s songs plays. That first scene where the Guardians are fighting that giant monster as baby Groot is dancing to music just really nails this Dolby Atmos sound mix. Every nuances sound effect is perfectly clear. Dialogue is presented cleanly and is always easy to follow, and free of any pops, cracks, hiss, and shrills. Lastly, the bass and low end of this mix is powerful and will rumble the walls and your bones. Reference worthy for sure. 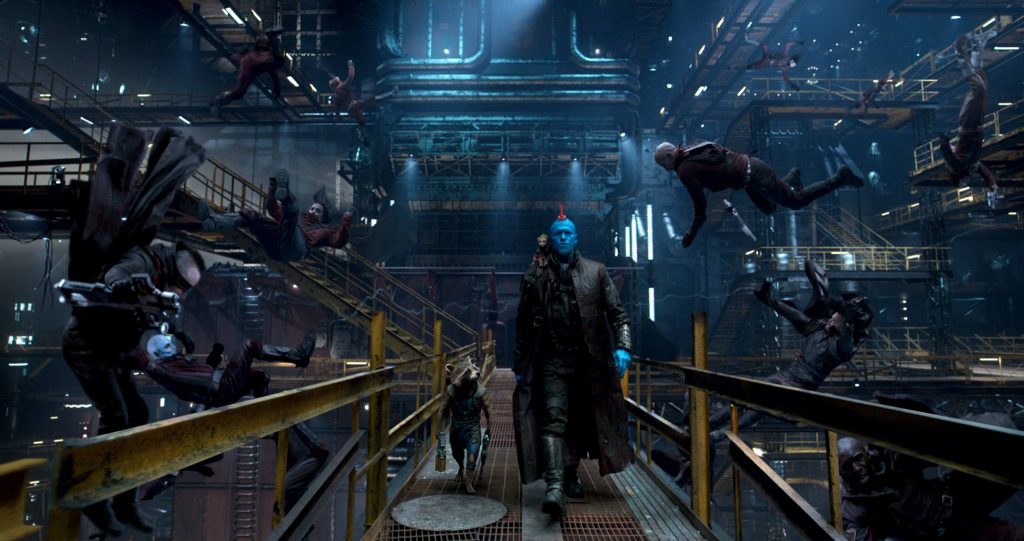 There are no extras on the 4K UHD Disc itself, but are all on the Blu-ray and Digital copy of the film.

Audio Commentary – Director James Gunn delivers a very informative and entertaining commentary that is definitely worth listening to. He goes over all of the difficult and complex shots, stunts, and story plots that he brought together to bring this wonderful film to the screen. Technical details, characters, and trivia on the Guardians are also discussed.

The Making of Guardians of the Galaxy Vol. 2 (HD, 39 Mins.) – This is a four part documentary that covers James Gunn talking about the differences from the first film and this sequel, as well as his love for the cast and story. The music, visual effects, and cast are all talked about in the other segments. A lot of fun and love are on this set, and you can tell.

Deleted Scenes (HD, 5 Mins.) – A couple of extended scenes and two deleted scenes are included here and are definitely worth watching. 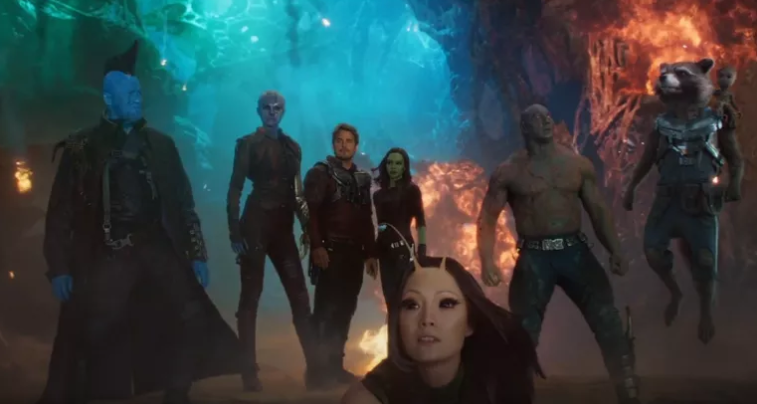 Guardians of the Galaxy Vol. 2 is a perfect sequel and so much fun to watch on multiple viewings. You’ll always find something different here. The characters, actions sequences, dialogue, and music are all flawlessly woven into this great story that I can’t get enough of. The 4K UHD aspect is phenomenal with excellent and rich colors and deep detail. The Dolby Atmos sound is demo-worthy in certain scenes too. The extras are all informative and fun to watch. MUST-OWN for sure. You even get the Blu-ray and Digital copy too with this purchase.