Celebrate The Life of Powers Boothe!!! 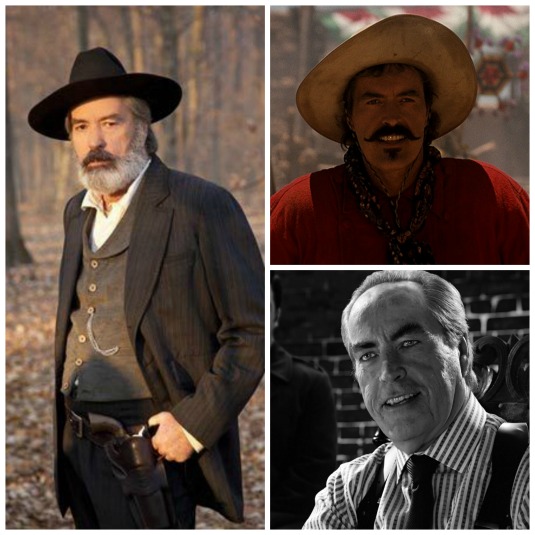 When great entertainers pass away, it’s difficult to come up with the right way to mourn a life that still lives on for us in so many ways. The one way we can not just respect the life, but continue to enjoy the life they lived is with re-watching their movies that cement their presence in our lives.

Powers Boothe died at just 68 years of age but in that time he has almost 70 acting credits throughout his career. Some of his lasting impressions in film that will stay with me are from ‘Red Dawn‘, ‘Tombstone‘, ‘Sudden Death‘, ‘Deadwood‘, ‘Sin City‘, ‘Hatfields & McCoys‘ and most recently ‘Agents of S.H.I.E.L.D.‘.

If you want to remember Boothe our way, this is going to be the list of flicks we watch in the coming days.

1.’Red Dawn‘ – From out of the sky, Soviet, Nicaraguan, and Cuban troops begin landing on the football field of a Colorado high school. In seconds, the paratroopers have attacked the school and sent a group of teenagers fleeing into the mountains. Armed only with hunting rifles, pistols, and bows and arrows, the teens struggle to survive the bitter winter and the Soviet KGB patrols hunting for them. Eventually, trouble arises when they kill a group of Soviet soldiers on patrol in the highlands. Soon they will wage their own guerrilla warfare against the invading Soviet troops-under the banner of ‘Wolverines!’

2. Tombstone – After success cleaning up Dodge City, Wyatt Earp moves to Tombstone, Arizona, and wishes to get rich in obscurity. He meets his brothers there, as well as his old friend Doc Holliday. A band of outlaws that call themselves The Cowboys are causing problems in the region with various acts of random violence, and inevitably come into confrontation with Holliday and the Earps, which leads to a shoot-out at the OK Corral.

3. Deadwood – The town of Deadwood, South Dakota in the weeks following the Custer massacre is a lawless sinkhole of crime and corruption. Into this uncivilized outpost ride a disillusioned and bitter ex-lawman, Wild Bill Hickok, and Seth Bullock, a man hoping to find a new start for himself. Both men find themselves quickly on opposite sides of the legal and moral fence from Al Swearengen, saloon owner, hotel operator, and incipient boss of Deadwood. The lives of these three intertwine with many others, the high-minded and the low-lifes who populate Deadwood in 1876.

4. Sin City – Four tales of crime adapted from Frank Miller’s popular comics, focusing around a muscular brute who’s looking for the person responsible for the death of his beloved Goldie, a man fed up with Sin City’s corrupt law enforcement who takes the law into his own hands after a horrible mistake, a cop who risks his life to protect a girl from a deformed pedophile, and a hitman looking to make a little cash.

5. Hatfields & McCoys – The story of the feud that nearly launched a war between Kentucky and West Virginia. Devil Anse Hatfield and Randall McCoy were close friends until near the end of the Civil War, when they return to their homes — Hatfield in Kentucky and McCoy in West Virginia — to increasing tensions and misunderstandings that quickly lead to all-out warfare between the clans (partially caused by a stolen pig). As hostilities grow and outside forces join the fight, the states where the families live are brought to the brink of another war as the feud makes international headlines, the states’ governors clash and the U.S. Supreme Court eventually intervenes.

6. Emerald Forest – Based on a true story, Powers Boothe plays an American dam engineer in Brazil. Boothe’s son (played by Charlie Boorman – son of director John Boorman, and best friend of Ewan McGregor) is kidnapped by a rain forest tribe, and raised as one of their own. Boothe continues to look for him and after many trials and adventures, stumbles upon him.

7. A Breed Apart – Jim Malden, a Vietnam veteran who has lost wife and child, lives as a recluse on an island full of rare birds. His only contacts with humanity are with Stella Clayton and her young son Adam, who have a small supply store on the mainland. One day, a mountain climber named Mike Walker brings a visit to the island to observe two very rare eagles; what he doesn’t tell Malden is that he’s hired by an egg collector to steal the eagles’ eggs. In the end, after he’s succeeded in bringing together Malden and Clayton, Walker gets a chance to lay hands on the eggs. He then decides to leave the eggs in the nest, influenced as he is by Malden.

8. Frailty – FBI agent Wesley Doyle is startled by the spontaneous declaration of youngster Fenton Meiks about how his father’s delusions to have a divine mission as avenging angel required him and his brother Adam to become his ‘demon-slaying’ murder accomplices. But when Doyle accepts to be shown concealed victim graves, the plot twists in the present just as gruesomely.

9. 24 – In this concept drama, each season takes place within one 24 hour period. Day 1: Jack Bauer is the head of field ops for an elite team of CTU agents who uncover an assassination plot targeting Presidential nominee David Palmer. Meanwhile, Jack’s strained marriage to his wife, Teri, is pushed to the brink by the sudden disappearance of their troubled teenage daughter. What will the next 24 hours hold?

10. Justice League – Forces of evil, chaos, and destruction await. Not even protectors like Superman, Batman, Wonder Woman, Green Lantern, the Flash, Hawkgirl or the Martian Manhunter may have a chance alone. But together as the Justice League, they are a metahuman force (and a hope) to be reckoned with.