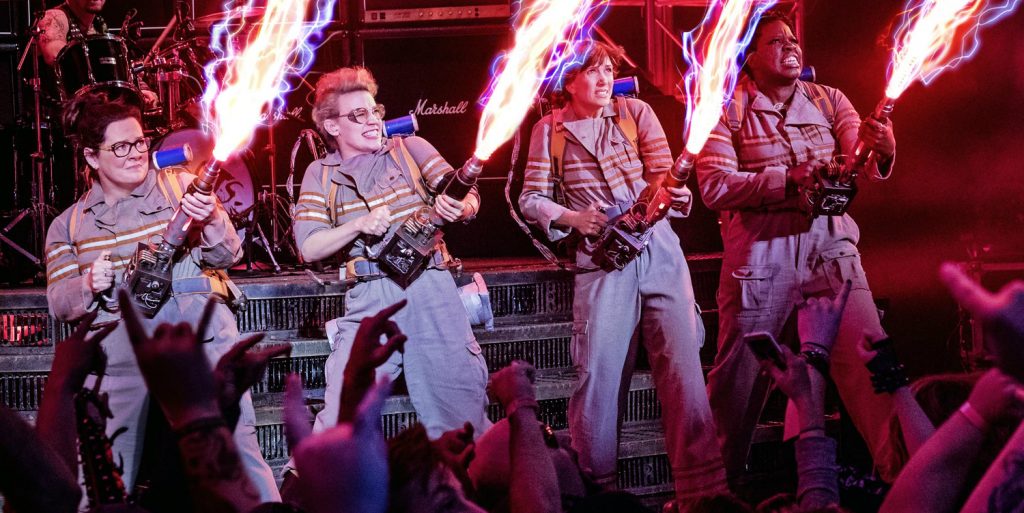 Paul Feig certainly has quite the resume. This writer/director/producer has recently made some of the funnier films, including ‘Bridesmaids‘, ‘The Heat‘, ‘Spy‘, and let’s not forget the hit TV series ‘Freaks and Geeks‘. Feig knows comedy and how to cast his roles perfectly. Each one of those films and a tv show are spot on hilarious with charm and heart. This same filmmaker has pretty much done the impossible, which is revamp the iconic 1980’s film ‘Ghostbusters’. Even before the first trailer for the movie debuted online, there was a sea of online people who trashed the film even before seeing one single frame of the film. It became a whole thing where sexism became one of the issues here.

There is a line in the film where the new ‘Ghostbusters‘ (Kristin Wiig, Melissa McCarthy, Leslie Jones, Kate McKinnon) read an online comment about themselves that references the whole female ‘Ghostbusters’ debate the online community seems to be having. It’s a mildly funny reaction to it all, but this topic seems to come up throughout the film and feels redundant. I hate to say it too, but these online haters of the film before the movie came out might have a smile on their face come opening weekend, because this new ‘Ghostbusters’ just isn’t that good. I’m not saying that I agree with the many people online who were boycotting this movie from the start. I’m quite the opposite in fact. I was for this movie from its inception and announcement, as I love Paul Feig and the incredibly talented cast here. They work well as a team and are quite funny with each other. 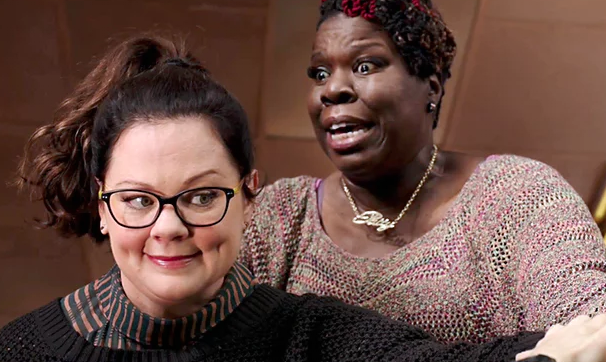 The unfortunate thing here, is that their chemistry starts and ends quickly with this ‘Ghostbusters‘ storyline, which transfers to a mostly unfunny and jumbled mess of a film. What really makes this film not succeed is that it just moves from scene to scene with an unfunny piece of dialogue here and there and some form of physical comedy that we’ve seen many times before, but this time it’s with a proton pack. There are no thrills or scares in the film either, other than a couple of places where the music crescendos loudly and it startles you. The encounters with the paranormal ghosts are mindless and unoriginal as well, leaving the magic and mystery of it all flat on the floor.

Even the characters themselves aren’t that distinguishable from each other with the exception of Kate McKinnon, who plays an over-the-top scientist with huge glasses and a ton of goofy faces. It’s very cartoony in the worst way. The rest of the characters may have just been one mind in three different bodies, all of them relaying the same thoughts and actions. The relationships between these four women just seem awkward, which is strange because one of the main themes here is friendship, but again, it all falls flat or comes across as super cheesy. What worked so well with the silliness of the original films is that the chemistry between the four Ghostbusters were organic and natural, and seemed like you wanted to be a part of their lives.

That is not the case here. Each person just seems to be an over-the-top cartoon version of themselves. Even the villain in this movie is lousy and plays more like a character from a Looney Toons episode than anything of substance. Then there is the fact that the film takes entirely too much time winking and paying homage to the original films with tons of cameos, locations, props, and other lines of dialogue, that it completely takes you out of the entire movie. At least Rick Moranis said, “No” to this movie. The visual effects too were a bore with each ghost looking exactly the same as the last one with no real emotion or thrills to them. It was as if the ghosts were unfinished in the editing room and they ran out of time. Then there is the music and the score of the movie, which is just sad and pitiful on all levels.

The new Ghostbusters song is horrendous and the score is unpleasant with zero fun and amusement to it. This all being said, there are some decent things about the film, well at least someone tried to do some decent things here. There are several moments where you can see the blue prints of an awesome movie come to be, but with each time good moment, it quickly falls flat and leaves an unsavory taste in your mouth. I mean, Feig cast Chris Hemsworth in the film as the ‘Ghostbusters‘ new secretary, where he plays someone that would never exist on this planet. Sure for the first couple of minutes, his gimmick is comical, but it quickly loses all steam and just becomes annoying. I love Hemsworth, and I’m sure he had fun in this role, but it adds nothing to the film or the franchise.

There is the potential for a good movie hidden in here somewhere, but even the amazing cast here couldn’t save it from itself. Again, there are cameos galore in the film and be sure to stay till after the credits roll, but I won’t be calling these ‘Ghostbusters‘ again any time soon.

You Know You’re Gonna See It!