‘The Conjuring 2’ Spinoff Movie is Happening with ‘The Nun’!

Yes, ‘The Conjuring 2‘ made it difficult to sleep for a few nights for me, and since I’ve seen that excellent sequel, I still get visions of one of the demons, which was a nun. It was truly terrifying. Well, just like ‘Annabelle‘ was a spinoff of the first ‘Conjuring‘ film, ‘The Nun‘ will be this sequel’s spinoff movie with James Wan and Peter Safran teaming up again to produce the film.

Yes, ‘The Nun‘ will have her own movie, and I bet it will be horrifying. David Leslie Jones will write the script, which he wrote ‘The Conjuring 2‘. Interestingly enough, the nun character was a last minute addition. The movie was ready to go with a horned demon character, but Wan had a vision of this scary nun, and they changed it last minute, as they filmed her scenes within three months prior to release, according to THR. 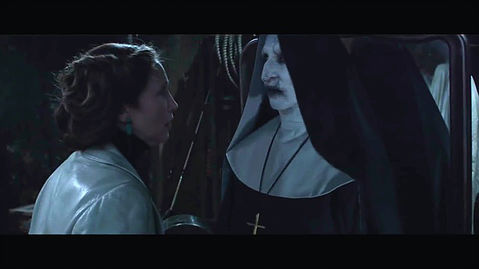 The nun scenes in ‘The Conjuring 2‘ were easily the scariest moments of the film and I can’t wait for this spinoff movie. The ‘Annabelle‘ spinoff movie made over $250 million in the box office and a sequel is planned for next year. I imagine ‘The Nun‘ will do better. Only time will tell. No director is set yet, but I want to put my name in the hat.