Alright, folks. Today, we’re going to brew up a little horror/thriller action. Let’s take a little Leatherface, mostly his hobbies and the essence of a sewing fetish. Add in quite a few heavy doses of The Hills Have Eyes – you know, the whole booby trap (THAT’S WHAT I SAY!) bit? For the final part of the mix, we’re going to sample a little bit of Mick from Wolf Creek lore. Pour it into a bowl once churned together, and we have ourselves a nice little Carnage Park.

Carnage Park is the sixth film written and directed by Mickey Keating. It’s no surprise, given the retro-vibe of this thriller, that all of his previous films have been of the horror/thriller genre as well. I may be speaking out of turn, but I can’t help but think as a savant of the genre that I, too, would want to take on the task that is a pseudo-grindhouse venture.  My prior “recipe” is not coincidental, as I do feel like this film is almost an homage to Texas Chainsaw Massacre. In no way is it a rip-off, but he gives the characters a similar goofiness and unique, creepy wit. An opening monologue and shot makes that sale instantly. Taking place in, what I would call, “The California Outback”, the film’s background is a desolate, hot landscape with no tree or shade for miles, giving a natural sepia hue to throw us back a bit. (NOTE:  Please don’t confuse or be concerned by my use of the sepia color/tone reference by thinking this film is like viewing an Instagram feed with faux-throwback photos and videos. You’ll find no annoying cross-fit clips or Taylor Swift music videos shared. Scout’s honor.)

It’s in the wilderness that we meet Wyatt Moss, played [well] by Pat Healy, a man who has carried many roles over the years. I see Wyatt as the love-child of some sick but amusing soiree between Kubrick’s Sergeant Hartman, the aforementioned Leatherface, and the douche brother that is Chet from Weird Science. With a description like that, the brain gets a little wrinkled trying to put it altogether visually, but throw on an old pair of Uncle Ronnie’s glasses and I’d like to say it’s pretty spot on. He’s sports the look of quite the huntsman with an affinity for war, and from there the intentions of the film are fairly clear.

You don’t meet a whole lot of people viewing this 70’s horror throwback. We have two criminals on the run, Scorpion Joe and Lenny, with a captive Vivian post-bankheist (Ashley Bell from the The Last Exorcism [franchise?]). As anyone could expect, a kidnap-ee is and would be quite distressed, but Bell’s frantic expressions are one of the more fun pieces I found here. Her character, Vivian, is much like her prior demonic-stricken showings in that she’s an innocent [seemingly] southern young lady who enters a world of pain. In this scenario, unlike the other, she comes to form in the chaotic environment. Of the few characters we’re greeted with is the famed Alan Ruck, or Cameron of Ferris Bueller fame.  Obviously it’s not a huge cast, but the story makes it clear rather quickly who it wants to focus on. 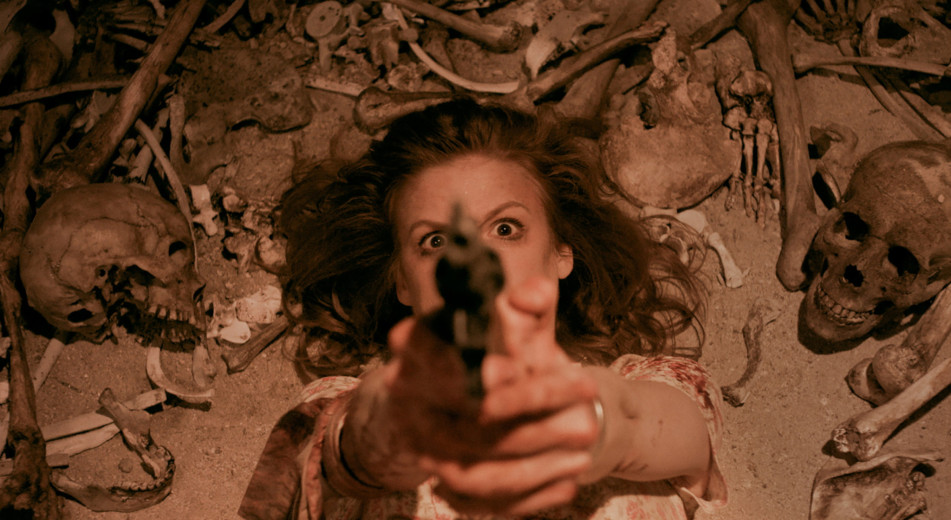 With traps set about this deserted real estate amongst dry bush, vehicular boneyards, and creepy housing, there’s not a whole lot worthy of taking refuge. When Vivian is left to her self, taking on the role of Schwarzenegger’s Running Man she finds this out with Wyatt on the hunt. Despite the vastness of the scenery, there’s no place to hide, or stay for long. She’s continually found, and it’s unclear if Wyatt is just a bad shot or just making more sport of the sport. Either way, a bullet near the ankles or the ear give exact instruction to press on for survival. In her quest to remain alive, we see Vivan’s transition from girl to woman, or fragility and innocence to determination and moxie. I can’t exactly say the hunter becomes the hunted, but I can say the hunted definitely does not lay down.

It goes without saying that I’m not going to mention how it all unravels or ends. Regardless how you like horror movies to end, on the side of devastation or on the side of triumph, there’s a little bit for both parties as the story wraps. If a fan of any horror or thriller, or even dark comedy, Carnage Park is worth more than simple consideration; however, if a fan of any cult flick, do not miss out by waiting and take in the first available viewing possible.