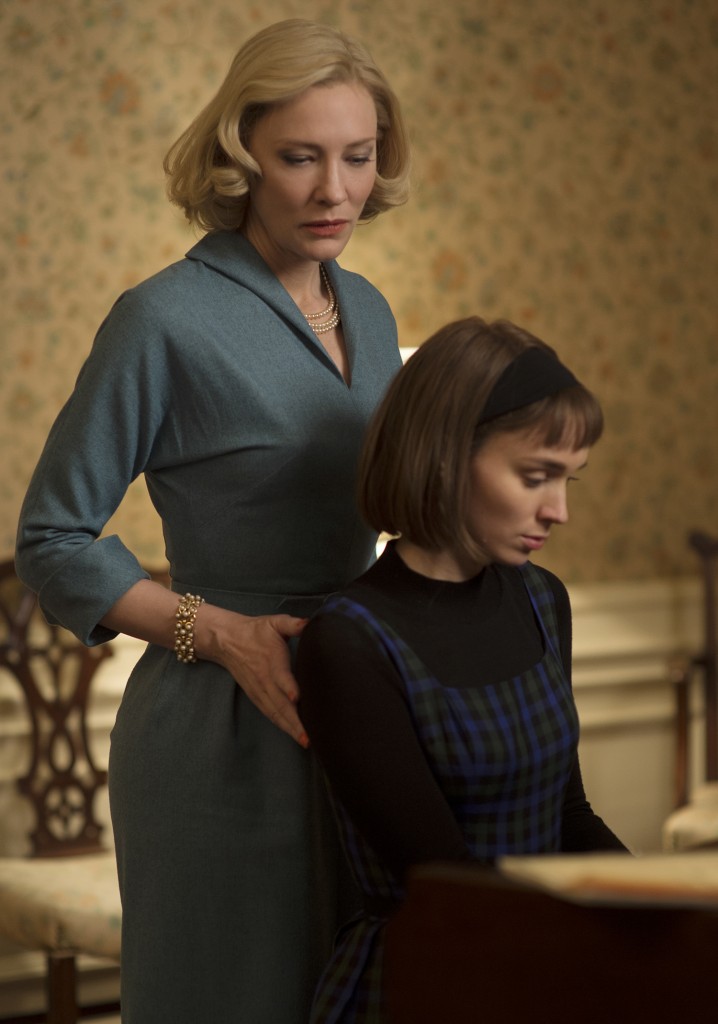 Carol opens with the sounds of screeching train tracks during the title slides. Fade in straight to a close-up of a street vent while an instrumental score is played. The images that follow (cars, people walking on streets, etc.) are warm with a soft glow, just what was needed to put the audience into 1950s New York. The world of The Price of Salt, the novel by Patricia Highsmith of which Carol is based. Carol follows the lives of two women whose paths cross leaving them perhaps forever changed, at least for one of them for sure. Life is struggle, right? No one gets through life without some kind of struggle. The Webster Dictionary defines struggle as to make strenuous or violent efforts in the face of difficulties or opposition. In the 1950s, women faced many struggles in the workplace, home, and within the family. Women started finding their path in life outside of the traditional role of wife and mother.

Therese Belivet (Rooney Mara) was young woman and an open blank book struggling to start writing. Having rolled the dice before, Carol itches to lay it all on the line for the hope of happiness. Therese is frank yet secretive (at least to her gentlemen callers), but she sits on the edge of her seat waiting to share all with the graceful woman that haunts her every thought. Therese’s male suitors were all trying to capture her either by marriage or by lust. Carol Aird (Cate Blanchett) was a married woman, struggling to gain freedom. Carol’s husband, Harge (Kyle Chandler), tried to trap her in marriage. However, for Carol and Therese, it only took one look. Thus their story begins.

It seems as though I’ll never tire of saying, “Blanchett is brilliant.” This has been a great year for her, too. I loved Blanchett in Truth. She tackles the role of Carol with the same dogged determination wrapped in elegance. As statuesque as she was in the first film I saw her Elizabeth, Blanchett glides through Carol hence Therese’s stupefied state. With Blanchett comes the talent to bring raw emotion out of every character she portrays. Undeniably, I shed a few tears at her performance, which I hate. Mara, though roughly in her beginning, brings maturity to her craft that will surprise you. 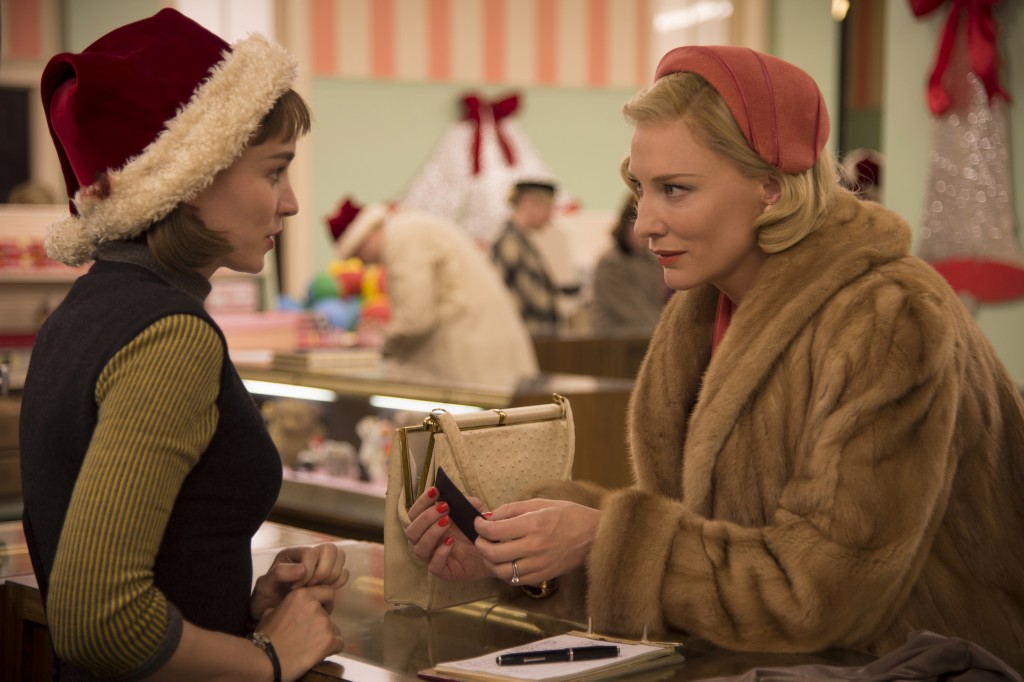 She can say more with a blink than with two minutes of dialogue. I saw Mara in Social Network, Pan, and Side Effects, but for me she blossomed in The Girl with the Dragon Tattoo and no, not because she was naked. I’m interested only in men. As Lisbeth Salander, Mara was minimalistic with her words and abrupt in her actions to the sharpness of a razor’s edge. With one look, she could cut any person down to size. I hope they carry through the other two books.

Anyway, I digress. Carol comes with some surprises, smaller roles, but solid actors. Kyle Chandler has had an extensive career, but admittedly though I know that Friday Night Lights was a hit for a lot of people, I remember him from Pure Country. He was the cocky and self-absorbed Buddy Jackson, a fill-in for Dusty Wyatt Chandler played by the awesome George Strait. Another fabulous surprise was the actress portraying Carol’s ex-lover and best friend Abby Gerhard, Sarah Paulson, love her on American Horror Story! I’ve watched Paulson for many years The Other Sister, What Women Want, Serenity, The Notorious Bettie Page, and the unforgettable witch she played in 12 Years a Slave. Paulson has skill and I hope to keep seeing her in more substantial roles. 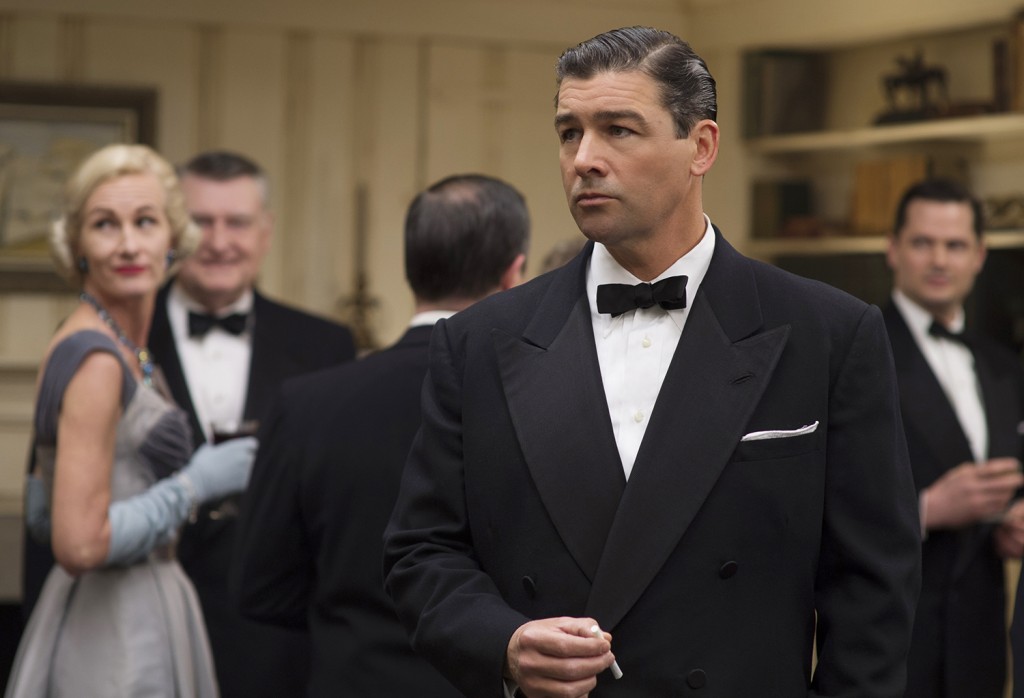 The film dragged for me with its 118 mins. (1 hour and 58 minutes) running time, but I’d argue this could have been a stylistic choice. Carol is inundated with symbolism (foggy windows with heavy condensation, pace of the film, etc.) for the hesitation and hidden surges of desire that come with sexual relations. Throughout the film, both Carol and Therese are dams on the precipice. Unfortunately, stylistic decision or not, the timing left me wanting about 20 minutes of my life back. Major kudos to the costume design team, Blanchett was fiercely dressed. I also enjoyed Mara’s costume transformation as she came into her own. Although the film received an R rating from the MPAA, the nudity is minimal even in the film’s one sex scene.

In closing, let me share with you something very important to me. A few people asked me why I would choose to screen a film with such a provocative story (same thing happened when I screened Fifty Shades of Grey). My answer is that when I start choosing only films that I like, agree with, and are just like me, is right when I’ll stop screening films. It’s called integrity and professionalism, which I work hard to maintain. I will screen and write about as many films as my schedule allows.