Comedy mastermind Judd Apatow is back this year with a new feature film called ‘Trainwreck‘ and is his best film since ‘Knocked Up‘. That was eight years ago. Sure, Apatow has written and produced dozens of films since then, but has only really directed two other feature films since, being ‘Funny People‘ and ‘This is 40‘. The usual actors are nowhere to be seen in ‘Trainwreck‘ either. There is no Seth Rogen, Jonah Hill, Jason Segel, Martin Starr, or even James Franco to be seen anywhere on screen. Actress and comedienne Amy Schumer wrote the screenplay here for Apatow to direct and the two are a perfect pair.

I wouldn’t go as far as to say this is the best romantic comedy I’ve ever seen, however it can be added to the greats, and I have to say that Amy Schumer is amazing in this role. Schumer plays, well, Amy, who writes for a fashion and gossip magazine in New York City. She seems like a lot of fun from far away, however, when you get up close, she’s not always a nice person. She can’t seem to have any sort of relationship with really anyone. She cheats on her boyfriend, she hooks up with any guy she sees, and can drink anyone under the table.

Even when her one-night stand lovers try to be nice and caring, she throws them to the curb without a single further thought. Needless to say, she’s not really a good person, nor could you trust her by any means. Her sister Kim (Brie Larson) on the other hand, has a great family, and seems to have the up and up on life, as she and her husband (Mike Birbiglia) try to guide her through unsuccessfully. An assignment from her hell-boss (Tilda Swinton), sends Amy to interview Aaron (Bill Hader), a doctor/surgeon to the famous athletes in almost each sport.

Hell, he’s even best friends with Lebron James, who has his biggest acting role to date here. Slowly. but surely, Amy starts to like Aaron and might just be right for a normal life, instead of hooking up with people like WWE’s John Cena (who hangs dong in the movie), or Ezra Miller, who’s safe word is “pineapple”. There are so many other cameos in this film, that it would take another twenty minutes to list them off, so I’ll move on. 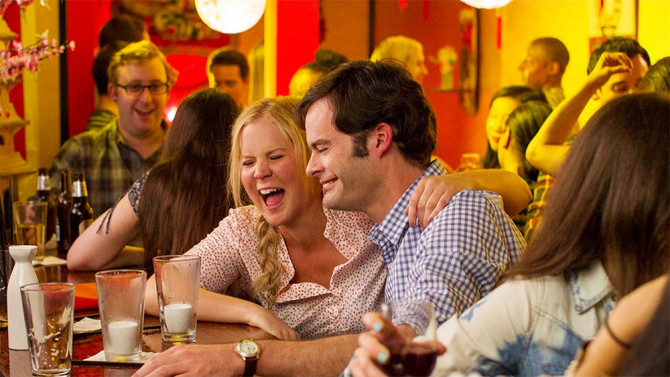 Throughout the movie, you can’t help but dislike Amy. Her attitude and bad habits will really rub you the wrong way, however Amy Schumer is so talented in that she can make you hate her and fall in love with her in a split second. It’s a very rare talent, one that I remember seeing in Gene Wilder, when he played Willy Wonka. That ability to truly scare or anger you in one moment, then completely turn you 180 degrees and make you fall in love is a rare gift, and Amy Schumer has it. It’s the big driving force in this movie.

Sure, Hader and the rest of the actors are funny and great, but this is Amy’s movie to own, and she does just that in every scene. Interestingly enough, this doesn’t seem like the typical Apatow movie. There aren’t tons of dick and fart jokes around every corner, and there doesn’t seem to be overly long improv riffs of cut downs. I mean, those are all welcome , but it seems Apatow has matured a little bit. ‘Trainwreck’ is an endearing film with a damn fine performance from Amy Schumer. You’ll laugh a whole lot, maybe learn something, and may even get choked up here, no matter if it’s from weed, sex, or emotions.