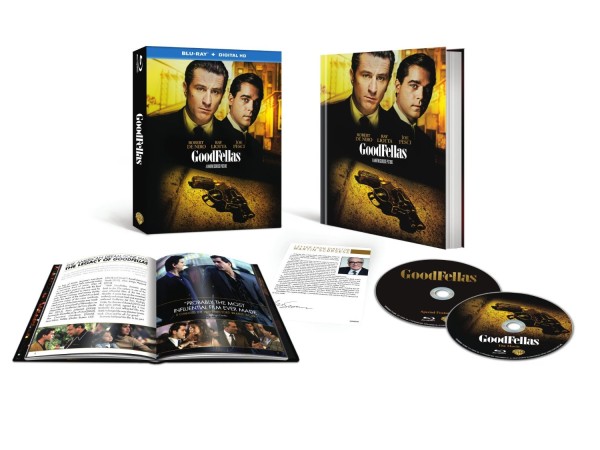 By the time 1990 came around, Martin Scorsese had already made several masterpieces in film, which continue to be praised and talked about to this day. With the likes of ‘Raging Bull‘, ‘Taxi Driver‘, and ‘The Last Waltz‘, we all knew that Scorsese was one of the finest filmmakers and storytellers around. Even with just those three previous films mentioned, you’d know you were in for a treat when Scorsese wanted to show you something. Then 1990 came around and Scorsese once again changed the film community with a movie called ‘Goodfellas‘, which was his big foray into the whole mafia genre.

Like myself, I think that most everyone around would say that ‘Goodfellas‘ is one of the best mafia movie that has ever been put on film. Besides ‘The Godfather I and II‘, I’m willing to bet that ‘Goodfellas‘ can stand side by side with those two films, because it is just that good. However, Scorsese told this mafia drama in such a different way, that it got most filmmakers to start telling their stories on film the same way that Scorsese did with ‘Goodfellas‘. It’s one of those movies that while it may be over 3 hours long, it is completely re-watchable at any time or day, because the characters, dialogue, and story are so compelling and told in such a fantastic and realistic fashion, that you can’t help but watch the whole thing all over again, and become entranced by what’s transpiring on screen.

In 1986, a writer by the name of Nicholas Pileggi wrote a non-fiction book about a real life mafia guy named Henry Hill. This book called ‘Wiseguy‘ detailed the life of Henry Hill from his childhood through his adulthood, as he joined the Lucchese crime family at an early age. The book talked about all the acts of violence and criminal activity that went on, including the largest heist in American history at the time, which was the Lufthansa heist. Luckily, Scorsese got a hold of the book and decided to make a film with a young Ray Liotta playing Henry Hill, who narrated what went on throughout the film.

Scorsese also got two ‘Raging Bull‘ actors Robert De Niro and Joe Pesci to star in this film, which earned Pesci a numerous amount of awards. Scorsese did something that original with this mafia genre, which was tell this story from a sentimental side from the eyes of these bad guys. Yes, we know that these iconic character are violent criminals who murder, steal, and exploit, but we also got to see the family and vulnerable side to them as well, which is one of the reasons ‘Goodfellas‘ is such an achievement in filmmaking. We virtually get to meet almost everyone in the Lucchese crime family and not only see them commit these heinous acts of crime, but we get to see them being friends with one another, taking care of their families, and sticking up for each other.

As many as there are kills and blood in ‘Goodfellas‘, there is as much laughs and jokes, which makes this realistic. The real life Henry Hill really laid everything out on the table for Scorsese and Pileggi to get acquire the total realness of the story and picture. Each character is based on someone in real life, which is kind of difficult to imagine. Even some of the more iconic dialogue scenes were taken from real instances, such as the “Am I funny to you” scene with Liotta and Pesci. It’s a funny scene, but damn is it scary for a moment when you have no idea what Pesci’s character Tommy is capable of. That’s why this film is so amazing. You get sucked in to feeling for these guys and want to be their friends, because they are all charming and fun, but we are quickly given a wake up call to see just how rotten these “Goodfellas” are.

Still, after 25 years, ‘Goodfellas‘ continues to be one of the best films ever made and paved the way for Scorsese into the mafia genre, as well as this brilliant style of filmmaking. We saw it in ‘Casino‘, ‘The Departed‘, and the recent ‘Wolf of Wall Street‘ film, and never disappoints. But ‘Goodfellas‘ is where it all started and continues to be the foundation for most modern mafia films. I’ll never get tired of seeing this movie. 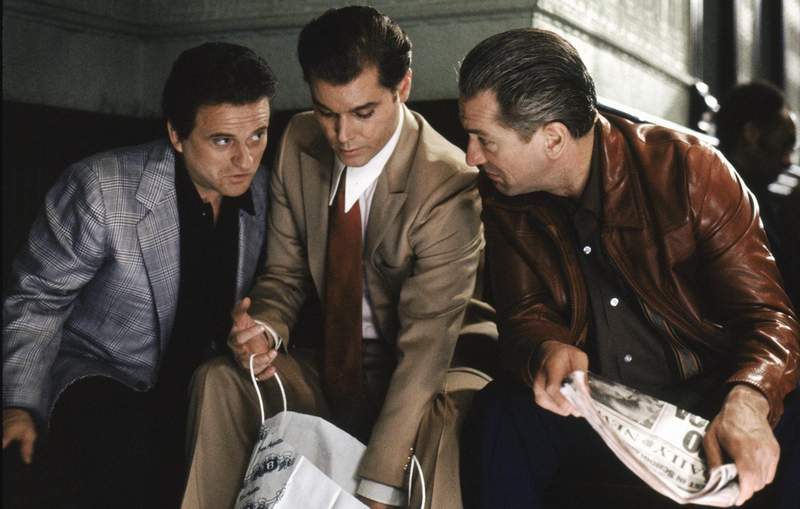 VIDEO: ‘Goodfellas‘ comes with a new and improved 1080p HD transfer. In fact, this transfer is a new 4K scan from the original camera negative, which is all sorts of awesome. Now, this is no stranger to Blu-ray. It was first released back in 2007, which was eight years ago. Since then, we’ve seen a few different release of this movie, including a digibook version with a big documentary on different gangsters through the ages. If you are any sort of cinephile or movie buff, I’m sure you’ve owned this movie in its various formats since VHS.

Finally though, we have an ultimate edition with the best looking video presentation this movie has seen yet. For this 25th anniversary edition of ‘Goodfellas‘, which is set in 1.78:1 aspect ratio, Martin Scorsese himself supervised the new transferred, which should come as no surprise since Scorsese is a big advocate of ilm preservation and making movies still without the digital aspect. Upon watching this new transfer, I instantly saw the improvements in the image. That first scene where Liotta, DeNiro, and Pesci are driving in the car and get out to kill the guy in the trunk is washed in red completely.

In previous releases, this scene tended to bleed a bit with red (no pun), as the older transfers were brightened up a bit. This particular scene just didn’t come across as natural and had an annoying shimmer to it. However, with this new look, there is none of that here. Everything is natural and well-balanced finally. This image has never looked so good. The colors simply pop off screen and are well saturated to give the most realistic look. Nothing bleeds or shines to brightly. The detail looks amazing as well. The image is vivid and very sharp, especially in closeups, where you can see every imperfection in everyone’s skin and individual hairs on a certain person’s toupee. Wider shots also have a lot detail, giving the image quite a bit of depth after these 25 years.

There is a very fine and consistent layer of grain throughout, which keeps the movie in its filmic state, and not looking like it has gone through the digital car wash, which is always nice. Black levels are deep and inky and the skin tones are very natural. It all looks excellent. There were no instances of any compression issues or any other problems like video noise or aliasing to speak of either. The contrast here is perfect and the color correction was top notch, leaving no room for error. Keeping with Scorsese’s vision, this video presentation is amazing.

AUDIO: Now on to the audio portion. Since this film came out 25 years ago, it has had some form of Dolby sound. From the DVD release to the recent Digibook release, all have come with  mostly a Dolby Digital 5.1 audio mix, but that’s not the case today with this new transfer. Once again, we have new and improved audio option, which is a lossless DTS-HD 5.1 audio mix and I couldn’t be happier. The other audio tracks were good in the past, but this is next level. Finally, we can hear what everyone is saying, since a lot of the film has a bunch of gangsters talking over each other in social settings. With this new audio mix, you’ll be able to hear everyone’s jokes and putdowns through each speaker.

Even lines of dialogue that have always been difficult to hear in the past, you’ll be able to hear clear as day now. Dialogue is always crystal clear and easy to follow now throughout the entire film. There were no pops, cracks, hiss, or high shrills. The sound effects of gun shots were loud and robust, and will usually cause you to jump, which is the intended purpose here. There is some great directionality here as well. There is no score in the movie, but rather one of the best soundtracks of songs in a film, which always keeps true to the time and place. It’s quite brilliant really. And the narration is smooth and spot on. The LFE is excellent and the dynamic range is very wide with each gunshot giving a nice bass sound each time. Just like the video presentation, this audio mix is excellent. 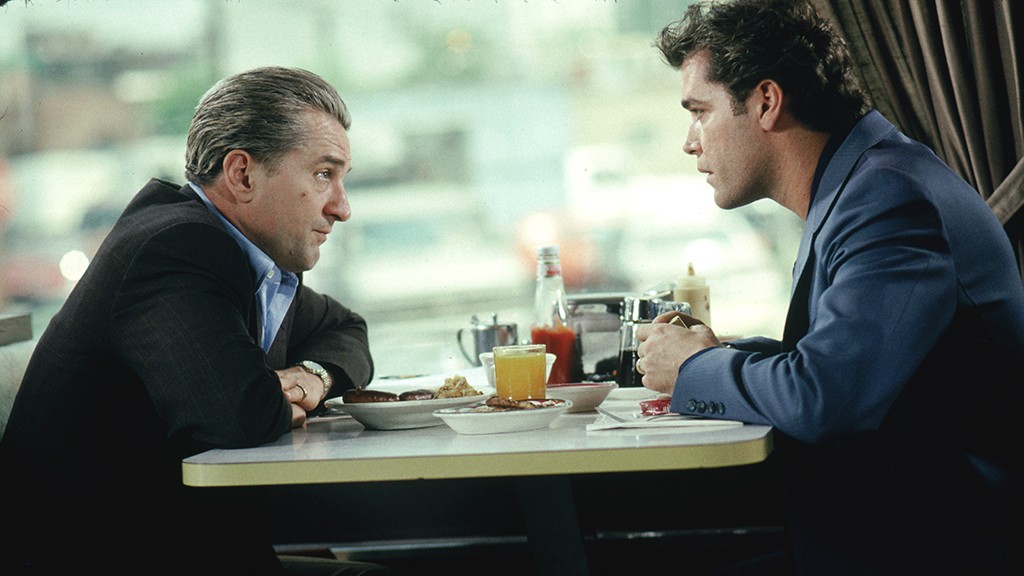 Scorsese’s ‘Goodfellas’ (HD, 30 Mins.) – This is an all new extra that features interviews with Scorsese, some of the cast and crew from the film, and Leonardo DiCaprio. They discuss some fun stories from the set and how it all came together. Unfortunately, Joe Pesci was nowhere to be seen or heard here.

Audio Commentary #1 – This is the cast and crew commentary, which was all separately recorded and was featured on previous editions. I wish there was a newer commentary. Perhaps in five years. There are about ten people on the commentary, but it flows smoothly as they discuss almost all aspect of the production, real life people, characters, and violence. Worth the listen again.

Audio Commentary #2 – This is the more interesting commentary as it has Henry Hill (the real life gangster) and the cop who he worked with talk about the comparisons from real life and the movie. It’s a bit awkward, but very informative and crazy to hear some of the stories.

Public Enemies: The Golden Age of the Gangster Film (SD, 106 Mins.) – Almost a two hour documentary here where a ton of filmmakers and others talk about the older gangster films and how they influenced movies like ‘Goodfellas’. If you’re looking for a ‘Goodfellas’ documentary, this is not the bonus feature for you, but if you want to know about tons of gangster movies you didn’t already know about, then check this out.

Getting Made (SD, 30 Mins.) – Here is the original behind the scenes featurette for the making of the film. There are vintage cast and crew interviews as they discuss their characters, storyline, and the authenticity of the movie. There is a small amount of on-set footage included.

The Workaday Gangster (SD, 8 Mins.) – The cast and crew of ‘Goodfellas’, as well as Henry Hill talk about the every day life of a mob man.

Paper is Cheaper Than Film (SD, 4 Mins.) – Here are some storyboard to screen comparisons in the movie.

Animated Shorts (SD, 31 Mins.) – Here are a collection of Looney Tunes and Bugs Bunny cartoons that feature animated illustrations of people who were in the famous mafia movies. These are awesome.

‘Goodfellas‘ is my favorite mafia film of all time, hands down. Just everything about oozes the word AWESOME. From the dialogue to the characters, and even the story was done flawlessly. I’m glad to see this get the 4K treatment with an upgraded video and audio presentation. This is the best this 25 year old movie has ever looked and sounded. If that wasn’t enough for you, there is a new 30 minute extra with tons of interviews about the film as well as an excellent new book that comes with the Blu-ray that details the entire production of the film. This release of ‘Goodfellas‘ is a MUST-OWN, even if you have one of the previous editions, because currently, this is the ultimate version to have. You won’t be disappointed and you won’t be a funny guy.