HOME follows the story of Oh (Jim Parsons), the little Boov who doesn’t fit in. The Boov are on the run from their mortal enemies, the Gorg, and they’ve decided to relocate all the Humans of Earth to Australia and claim the rest of the planet for themselves. Gratuity “Tip” Tucci (Rihanna), has managed to avoid relocation and is determined to find her mom (Jennifer Lopez). When Oh accidentally reveals the Boov’s hiding place to the Gorg he too must go into hiding. Tip and Oh end up joining forces to the solve their problems and Oh finds his “HOME”.

DreamWorks Animation has, historically, lacked the sophistication of Disney/Pixar films. HOME is no different. The jokes are mostly slapstick and “toilet humor” and overall the film is very juvenile. Older children (10 and up) and adults may feel bored while watching HOME, but the 10 and under crowd will love it. 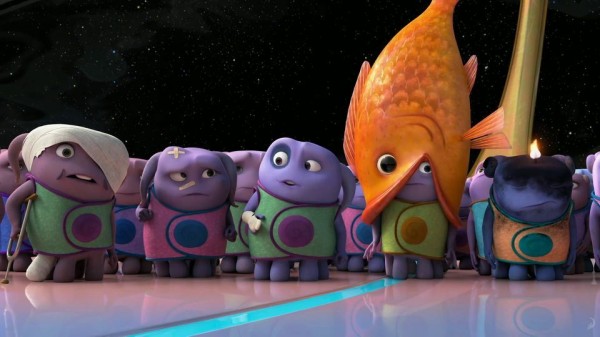 The animation and art was beautiful. The Boov and Gorg each had a very distinct style to them. The Boov ships and technology are all round and bubbly with lots of bright colors, while the Gorg were sharp, triangular, and dark. I was amazed by the detail put into Tip’s curly hair — it flowed and bounced more realistically than Merida’s hair in Brave. Liquids also flowed realistically. There is a scene where Tip is driving in the rain and the rain on the windshield looked real. The 3D was also not overly obnoxious and definitely enhanced the realism of a lot of the animation. There were still plenty of “in your face” 3D effects to entertain the kiddos though!

Martin’s performance as Smeck was phenomenal! I didn’t recognize his voice throughout the entire film and only figured out it was him after staying through the credits. The other voice actors were not as impressive. Parsons has been typecast as the quirky weirdo and Oh is just a cutesy version of Sheldon from The Big Bang Theory. Rihanna did well as Tip, but her overall performance wasn’t anything more than reading from a script. The film relied more on animation rather than the voice actors’ performances to bring life to the characters. While I understand that casting big name talent (Like Rihanna, Lopez, and Parsons) sells more tickets, I would like to see Hollywood make a change and start casting true voice actors over big celebrity names.

On the whole HOME is a silly family film. It’s cute, funny, appropriate for the entire family and boys and girls alike will enjoy it.