Director Jean-Marc Vallee is becoming one of the finer filmmakers of this modern age. Even though his resume is a short one, each one of his films has been fantastic. Vallee is one of those directors who does not stick to one particular genre, but rather goes after different stories in different time periods and genres. And while he might not be as drastic as Stanley Kubrick in this fashion, the comparison is still there.

With films like ‘C.R.A.Z.Y‘, which was a lovely coming-of-age story to ‘Dallas Buyers Club‘, which focused on small bit of history on the AIDS epidemic in the 80s, to the historical set film ‘Young Victoria‘, which brings us to ‘Wild‘, the wilderness adventure set in the 90s. All of these films center on raw, genuine, and strong characters, but are all in different settings. Each of these characters in these different films have to come to terms with something from their past and deal with them overcoming some personal demons.

Based on the best-selling memoir by Cheryl Strayed, but adapted to a screenplay by Nick Hornby (‘High Fidelity‘, ‘About A Boy‘), ‘Wild‘ follows a young woman named Cheryl Strayed (Reese Witherspoon) as she hikes the 1,100 mile journey up the west coast alone to overcome a series of tragedies in her life. Strayed (a name she took on after her drug fueled years and divorce) was a smart and beautiful young woman, who had tons of friends and her life pretty much mapped out. Despite her mother (played by the impressive Laura Dern) being a few abusive relationships, Cheryl and her mother had a close bond. 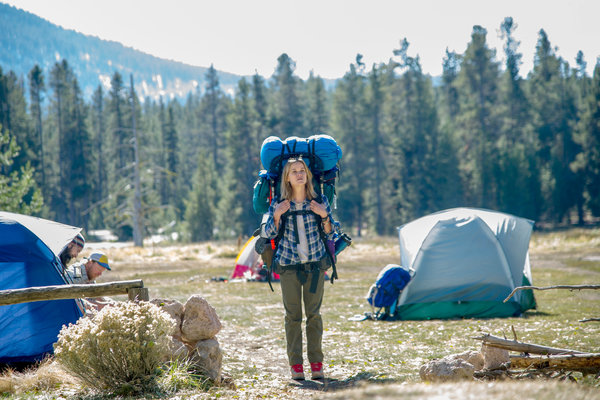 But an unfortunate illness caused Cheryl’s mother to pass early in life, causing Cheryl to nosedive into a wall of heroine and sex with anyone other than her nice husband (Thomas Sadoski). The film starts off with Cheryl in the middle of her hike, trying to overcome some physical issues with her journey. From this moment on, we get flashbacks of her life that brings us back to the beginning of her dangerous voyage alone. In addition, we see glimpses of some of the key moments of Cheryl’s life with her mother and brother, growing up, dealing with her mother’s passing, and her drug binge, which ultimately leads her to take this trek to become the girl her mother knew her to be.

And Vallee captures each moment perfectly with a very emotional and deep tone. But like Vallee’s other films, there are quite a bit of humorous moments throughout. This story of family tribulations and survival go hand in hand with this very genuine mother-daughter story and both Witherspoon and Dern play it flawlessly and are both award worthy performances. Witherspoon completely threw herself in this role and does not shy away from any of the drug abuse or sexual encounters she has. You’ve never seen Witherspoon like this. And even though she does some deplorable things, her charisma and will keep us rooting for her in the long run. There is no doubt that you will come to love and cry with Witherspoon throughout the film.

Vallee has conjured up a brilliant cast and crew to give us a very emotional yet redeeming film where we first meet our main character, she is not doing well, but by the end, she is quite amazing. Despite a few usual pacing problems with the flashback gimmick, ‘Wild‘ is a film you should definitely see.