Film Review: ‘Into the Woods’! 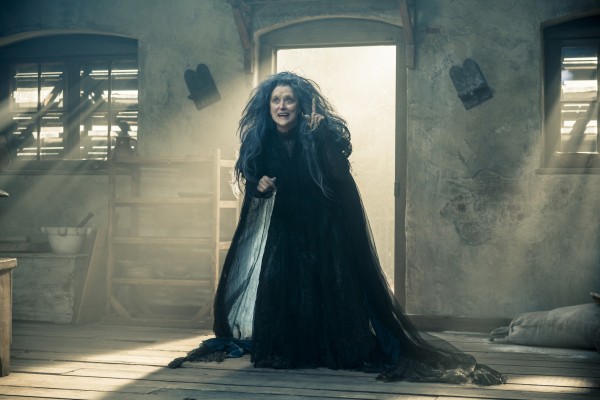 Into the Woods had a great deal of expectations to live up to. A beloved musical featuring a well-known cast and director, this fairytale musical could easily have been a disappointment. However, with some musical high notes and great performances, the movie was a fun watch, in spite some editing and storyline issues.

Centered on a Baker (James Corden), The Baker’s Wife (Emily Blunt) and The Witch (Meryl Streep), their neighbor, who all live in a village near the woods, Into the Woods weaves their lives into the lives of infamous fairytale protagonists, Little Red Riding Hood (Lilla Crawford), Jack and the Beanstalk (Daniel Huttlestone), Cinderella(Anna Kendrick), and Rapunzel (Mackenzie Mauzy). The Baker and His Wife have been unable to have children and find out why when The Witch admits that she cursed the Baker’s family when he was a baby because his father stole magic beans from her garden. This theft  left The Witch old and ugly. As pay back she took The Baker’s younger sister and cursed him to be the last of his line.

As a blue moon is expected in three days, the witch promises to lift the curse if The Baker and His Wife work to gather four magical objects that will help restore her beauty. As the couple runs into the woods to search for these objects they throw fairytales off track, understand they need each other to accomplish all their tasks, and work with the others to save an entire kingdom from a vengeful giant.

One thing to admire about this musical, originally written by Sondheim, is the grim look it takes at these age-old stories. Ignoring the usual Disney “happily ever after” treatment, Into the Woods chooses to incorporate some of the more grisly, original details of these fairytales – hacked feet and all. Throughout, it retains a hopeful note, but the story also warns of the dangers of getting what you wish for. Even The Witch is brought down more by her own foibles than any great work of the heroes to undermine her. And the happy endings that exist in this musical are received with some bittersweet and grievous realities. 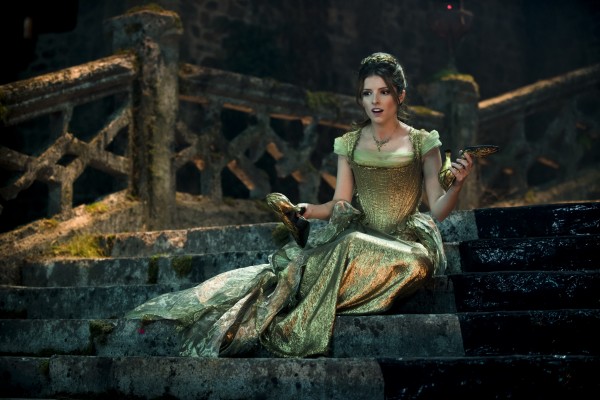 I had the benefit of not seeing the original musical before, and so I was not burdened with knowing where the original Sondheim story was revised, cut, or songs changed. I understand that this might upset many, and there are some points that probably would have been better if it had stayed truer. The film does drag a bit towards the end, and though it picks up again, it is noticeable.

In ways, the story of Rapunzel and her Prince (Billy Magnussen) seems barely tacked on, and you never have the opportunity to connect with their characters. It’s not even really addressed that it is possible Rapunzel is The Baker’s stolen baby sister. Additionally, I would have liked to see more from Christine Baranski, Lucy Punch, and Tammy Blanchard as the Evil Stepmother and Stepsisters – especially from Punch who did so well as an annoying but not too threatening Evil Stepsister in Ella Enchanted. Here, it seems these three could have really been let off the hook with a few more minutes of dialogue. 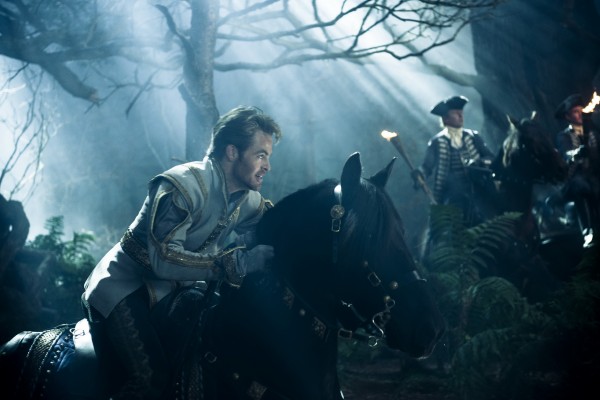 The acting from character-to-character goes from fantastic to reliably expected. Meryl Streep crones it up at first and turns to fabulous during the end, showing both her sinister and comedic sides. Emily Blunt becomes increasingly ambitious and cutthroat as she and Corden work to end their spell but shows a giddiness that was unexpected when she makes some regrettable decisions. Though, brief, Johnny Depp makes an appearance as the Big Bad Wolf. He leaves an uncomfortable impression as his wolf invokes a threatening demeanor that carries a slight sexual undertone. Chris Pine’s Prince is smug in an unassuming way, and it times he seems like he’s channeling William Shatner skills for a comedic and heartthrob effect.

Otherwise, the remaining cast including Kendrick, Huttlestone, and Corden struggle to standout amidst the large cast.

The music, mood, and sets are all well done. The forest never seems to stand on its own as a character though it seems that would be expected as more and more characters identify it as part of the reason things are in such upheaval. However, throughout, it does contain enough whimsy to help you forget you are sitting in the theater. Meryl Streep’s performance of both “The Prologue” and “Last Midnight” stand out and were so on point, the audience erupted in applause after her opening solo. The hammed up version of “Agony” performed by Chris Pine and Billy Magnussen was a great comedic piece that will likely standout in many people’s memories.

Overall, I’m giving Into the Woods 3.5 stars. It had great performances and well-executed numbers. I just wish it had kept its lively pace throughout and better woven in some stories more than they were. No matter what, it would be a great choice for a family with older children come Christmas Day.