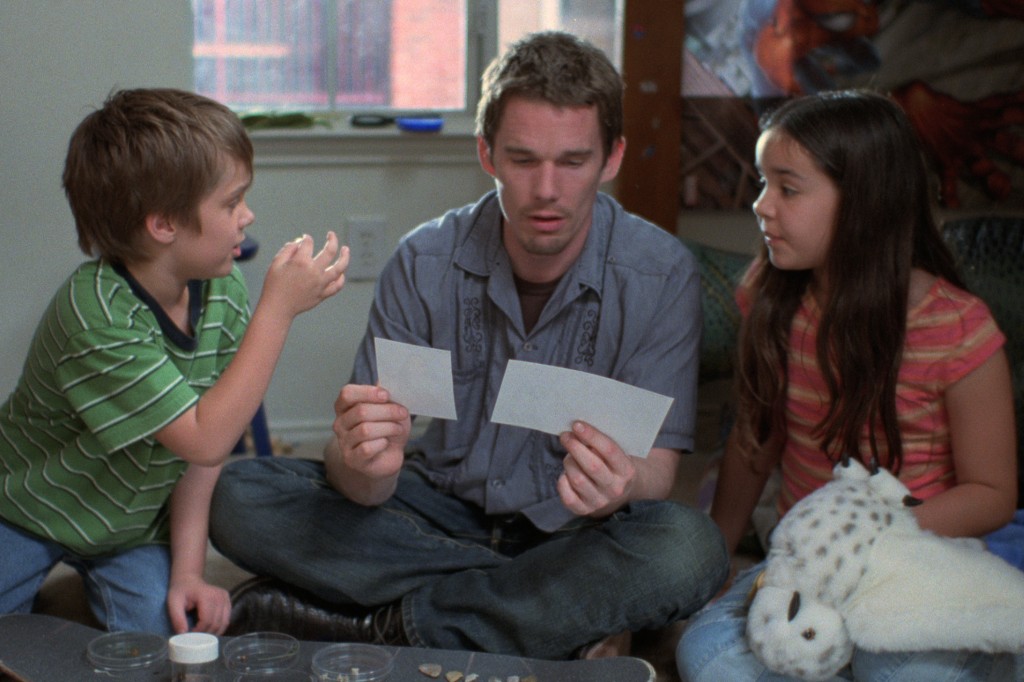 If you’re unfamiliar with the name Richard Linklater, then you’re in for a real treat. Linklater is a Texas filmmaker who is known for making iconic movies in and around Austin and Dallas, Texas. His films include ‘Slacker‘, ‘School of Rock‘, the ‘Before‘ series, ‘Bernie‘, and the iconic and legendary piece of cinema ‘Dazed and Confused‘. But nothing could have prepared us for his newest film called ‘Boyhood‘, which is a cinematic milestone and achievement and something that will be talked about and praised for many years to come.

And I’m quite sure that this will be nominated for Oscars, specifically Best Picture, but I think that it deserves its own special category and award at the Oscars. It stands out that much and is that good. You’ve probably seen the story of ‘Boyhood‘ a hundred times before on television and on the big screen. We’ve all seen families and kids grow up, grow apart, go through difficult times, have their first kiss, going off to school, and even having your first beer. 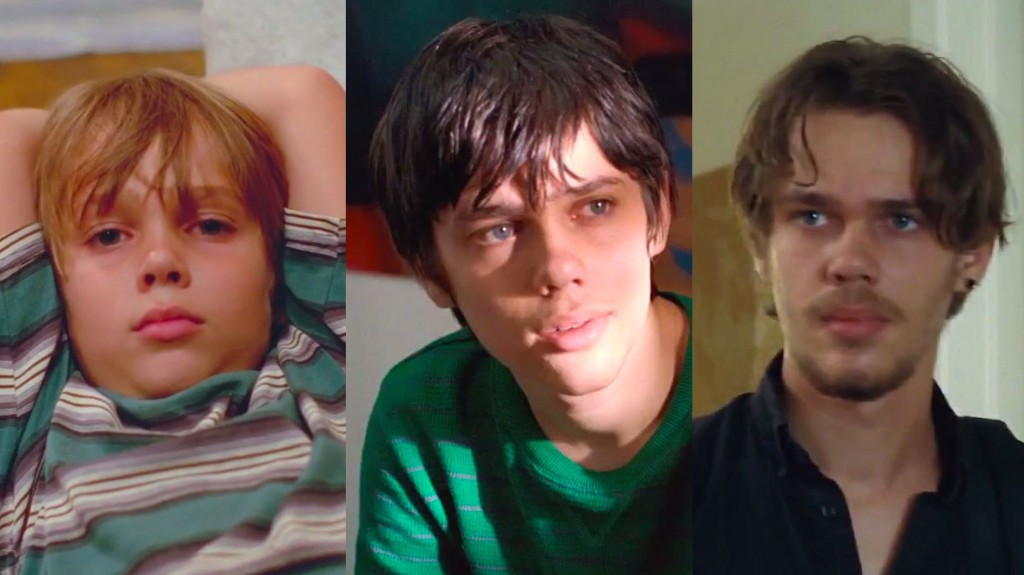 But it’s how Linklater told this story of growing up that is so unique. Linklater filmed the movie in under two months over a twelve year period between 2002 and 2013, using the same actors sporadically for a day or two here and there over the twelve years. We see them, especially the kids grow from early grade school through going off to college. It’s quite impressive and very magical to say the least.

It reminded me a little bit of Terrence Malick’s film ‘Tree of Life‘, where we saw a family go through the key moments of life. We get that essence with ‘Boyhood‘, but on a very subtle level and no matter if you are eight years old or in your late 50s you will for sure relate to the characters and remember doing some of the things growing up in your own family.

But where others have taken a whole season to do or a long documentary to tell a tale, Linklater told a perfectly cohesive and realistic story in a narrative film, using the same actors for twelve years, which is a feat to say the least. We see the emotional and physical changes of each character throughout and how they grow into who they became now. The two big actors throughout the film are Ethan Hawke and Patricia Arquette, who play Mason Sr. and Olivia. 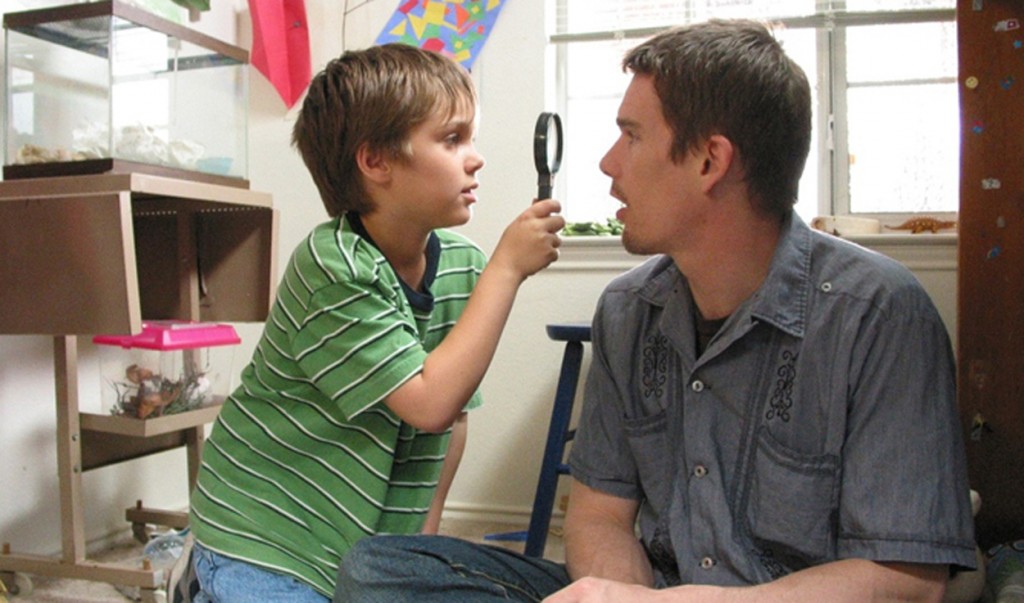 They are divorced parents with two young kids who mature over the course of the film. The young kids are Ellar Coltrane (Mason Jr.) and Lorelei Linklater (Samantha and Linklater’s real life daughter). ‘Boyhood’ is told through the eyes of Mason Jr. and we see Ellar at a very young age as a very cute kid who grows up to a be a kind, quiet, thoughtful, good looking young man on his way to college. The same thing goes for his sister Samantha, who is a more blunt, in-your-face rebellious teenage girl.

Although it is never revealed why Mason Sr. and Olivia got divorced, you can come to a conclusion is was because they were extremely young and Mason Sr. wasn’t ready to be a father. Although you can tell that he is always wanting to be around his kids and is a decent father, although he isn’t around too much.

Meanwhile, Olivia moves to Houston where her kids start a new school, which seems to happen a lot over the course of the film, because she marries two seemingly good men, who turn into violent abusive fathers. But like Ellar says in the movie, “It’s the little moments that make life worthwhile.” And that is the key to this film and Linklater showed us the precious moments of happiness, disappointment, tragedy, love, and loss perfectly. 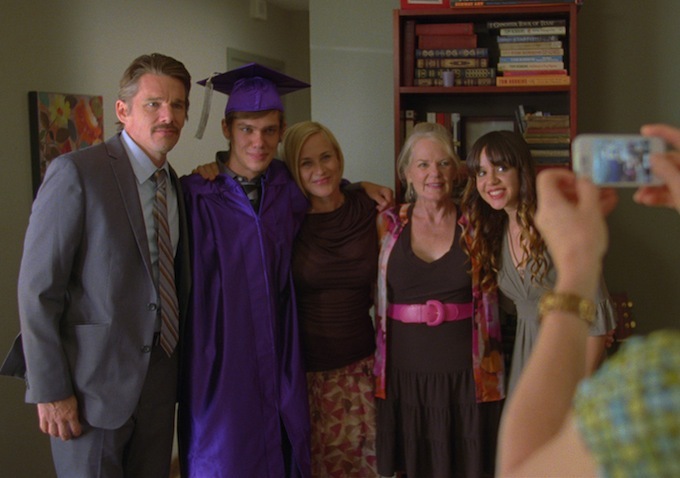 Whether it be seeing the kids stand in line in costume for a past ‘Harry Potter‘ book, going to see your first concert, that iconic conversation between father and son about ‘Star Wars‘, the first awkward talk about sex, or how to be a good person to other people, it’s all her in ‘Boyhood‘, and each actor plays it flawlessly. Or at least as flawlessly as they could, considering it taking twelve years to make, while going through childhood, puberty, and your teenage years.

With ‘Boyhood‘, it’s not about what happens in the film, it’s about the journey. The journey of a family who has matured and grown through thick and thin. The end result is very fulfilling and it will leave you wanting to spend more time with the characters, or at least check in with them from time to time over the next twelve years. ‘Boyhood‘ is a must-see for everyone.

P.S. – Check out Preston Barta’s Q&A with actor Brad Hawkins, where they discuss all things ‘Boyhood’ by CLICKING HERE!