You can mark another win for Drafthouse Films, the film company connected to The Alamo Drafthouse Theater chain. This past week  at the Cannes Film Festival, Drafthouse Films picked up a crime thriller called ‘La French‘ that stars Jean Dujardin and directed by Cedric Jimenez. And get this – Drafthouse bought the U.S. distribution rights after the people at Drafthouse watched an eight minute reel of the film. Not only that, but Jimenez was signed to one of the top talent agencies in Hollywoood, which is WME.

So congratulations are in order to everyone for selling a movie and getting signed on basically a trailer. ‘La French‘ is set in the 1970s in Marseille and is based on the true story of the judge who tried to stop the French Connection, which was one of the largest if not the largest drug organizations on the planet. Marseille in the 70s was the capital of drug trafficking and the main supplier of heroine in the United States.

The deal was make with Cecile Gaget and Yohann Comte of Gaumont International and Tim League and James Shapiro of Drafthouse. “One of our goals is to get young audiences excited about foreign language film,” says Drafthouse Films founder and CEO Tim League. “We combed the market and devoured the official selections. Nothing excited us more than ‘La French’.” 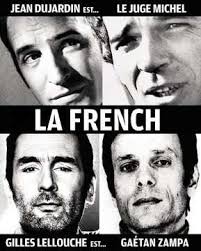 ‘La French‘ was made with 35mm cameras, which is rare these days, and in true Drafthouse fashion, they plan to screen it only at select theaters and release it on VOD, DVD, Blu-ray, and yes VHS.

Jean Dujardin played the Swiss banker in ‘Wolf of Wall-Street‘, one of the war heroes in ‘Monuments Men‘, and was the main actor in the Oscar winning film ‘The Artist‘. And I haven’t seen any of Jimenez’s films yet, but I plan to take a look at the couple of movies he has done. This sounds a mix between ‘Goodfellas‘ and ‘Scarface‘.