Film Review: ‘Stranger By The Lake’!!

Today I screened the French film “L’inconnu du lac” or “Stranger by the Lake” by director Alain Guiraudie. The film stars Pierre Deladonchamps as Franck, who is the shining point of this movie, and the French Joaquin Phoenix lookalike, Christophe Paou as ‘Michel’.

I love foreign language films. It’s like reading a book where the scene is set for you in full color. The image plays out in front of you and the words you read go hand in hand. In “Stranger by the Lake” however, they go together like hand and gratuitously filmed penis.  To call this a ‘homoerotic  suspense thriller’ would lead you to believe that: A) there is a mystery (there is not), B) there is suspense (less than ten seconds) and C) that there are only a few homoerotic sex scenes (it’s more like a baker’s dozen ).

Unfortunately in this movie’s case, the never ending sex scenes overwhelm the story, which is drab, frustrating, leads to no where, and is just a set up to film lovely people having sex on the beach (the actual sex act, not the drink). Franck comes to “cruise the lake”, aka pick up men for the summer and is immediately smitten with the not-so-single Michel. Not to worry, as Michel quickly becomes single by killing and drowning his lover in the lake while Franck watches. I was with the movie up until this point, which is where Franck doesn’t run screaming to the police and tell them he has just witnessed a murder. But nope, instead he goes home, has a rest, and comes back to the lake the next day to have a swim in the dead body lake. Why is he there you may ask? To chat with a friend and hook up with the murderer, who he hasn’t said but all of two words with, because that seems like the totally not mentally unstable thing to do. 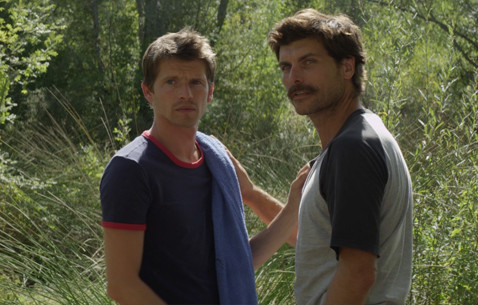 In a lot of films you see two people start to make out and get hot and heavy, which then leads to sex, and is often left to your imagination. That is not a problem this film suffers from. Every sexual situation is shot up close and at length. When you hear a man receiving a hand job say, “I’m gonna come”, you can imagine what that would be like in your mind. But there is no need for your imagination when you’re FULLY shown the act, nearly getting the liquid on the camera lens. Note that this is one of the milder scenes. The only thing I saw more of than the human penis in this flick was the parking lot at the beach. I stopped counting at a dozen different ridiculously long takes of cars parking or leaving the unpaved lot. I guess the director liked filming people getting in and out of cars.

The ending of this film is a complete shock, in that it doesn’t end. It’s a cliffhanger in the worst possible way. I doubt any of you will see this, so I’m going full-on SPOILER MODE right now. Michel eventually snaps his tether and starts murdering any person he stumbles across. Franck seems to gain some sense and finally starts running for his life with Michel hot in pursuit, shouting about his love and need for Franck. Michel disappears into the woods surrounding the beach and so Franck comes out of his hiding place and…. (here is that split second of suspense I told you about), starts screaming Michel’s name. Fade to black and end movie.

There are a lot of really good movies out there that fall into the minimalistic, suspense/thriller, homoerotic/porn and foreign language categories. This is not one of those films. If a homoerotic thriller is what you’re in the mood for- try the short film “Playing in Darkness” or 2006’s “No Night is Too Long” (careful with the trailer as it is just one big spoiler). I’m gonna give this movie one star which goes solely to the lake, which was beautiful despite being in this terrible movie.