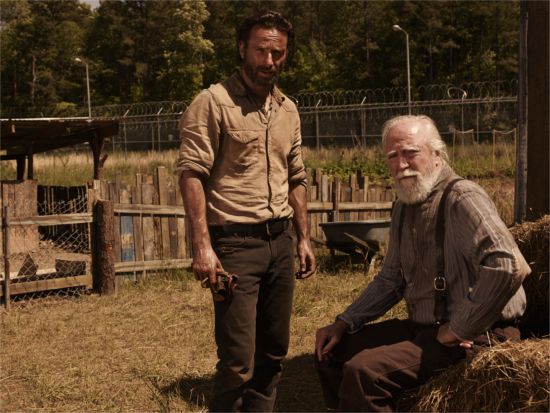 On tonights episode of AMC’s “The Walking Dead”, we saw the death of some main characters and the fall of the prison. We see the Governor cross the point of no return and Rick being pulled out of his passive aggressive role as leader. It  was one of the saddest and possibly one of the most talked about episodes ever aired on this show.  Let me break it down for you exactly how the mighty prison fell and who exactly died tonight. Hold on to your seat.

The Governor convinces his militia that they need to attack the prison for their safety. Its the same song and dance he has used for a while. This time, though, he took Hershel and Michonne hostage to negotiate with Rick. They are his “key” to get into the prison. Lily isnt buying this for one minute. Everyone else, though, is pretty much on board. The Governors tries to persuade her with his dance about wanting to keep them alive. He does play a really good “good cop” with Hershel and Michonne at the camp. He tells them his plan to take the prison. Hershel tries to convince him that they can all live together. He comments on how him and Rick have changed. The old Governor is coming back and no one can stop him, not even Hershel. He wants to be the hero and redeem himself for his sins. He has attached himself to Megan and this group of people like he is their savior. Its sickening to watch him weave his web. His final hug to Megan even creeped out Lily. Megan and Lily are left behind for safety.

You now see the aftermath of the chaos in the prison. Glen is getting better and making plans with Megan. Sasha thanks Bob for saving her. Rick tells Daryl about Carol. Daryl is pissed that she got kicked out. Both of them go to tell Tyrese and when they met up with him, he shows them a rat opened up. So who in the world killed the rats? We still have no idea who did that. I was thinking it might have been the Governor, but now it could have been someone doing a practically joke. Hopefully, next season will solve that mystery. Rick starts to tell Tyrese about Carol and an explosion happens. Everyone runs out and there is the Governor in all his glory standing on a tank. He attempts to call out Rick, but Rick back peddles and squawks  about the council. It’s only when Michonne and Hershel are brought out that Rick goes out to meet the Governor.  Rick has now been yanked out of his slumber. Let the games begin.

The Governor wants the prison. Rick doesn’t want to give it up. Its a back and forth tug of war conversation. Meanwhile, Daryl is being proactive and  arming people behind the fences. The emergency plan of everybody getting on the bus is now in place. The Governor is now bragging about his tank. I guess he thinks that there are no guns or weapons in a prison. Back at the camp, Megan gets bitten by a walker hidden in some mud. Lily could have saved her, but she was busy paying attention to another walker across the river. There goes the family unit.

The body count just gets higher and higher. Most of the Governors militia is killed. Daryl has the most badass move in the whole show and blows up the tank with a grenade. Then, he kills Mitch with an arrow in the heart. While all this is going on, Rick and The Governor are in a fist fight.  The emergency bus leaves with Glen on it and leaves most of the main cast behind. Lizzie kills Alisha to save Tyrese. All the kids are running around. Adults are running around. Its freaking pandemonium. Michonne stabs the Governor in the chest and Lily comes a few minutes later and shoots him in the head. Rick finds Carl and Judiths baby carrier, with no Judith. I don’t think she is dead, even though Rick and Carl think she is. Everyone is out of the prison and running in different directions, while walkers are stumbling in. Gone are the days of the “safety” in the prison. Rick and Carl limp away and don’t look back.

Look, we all knew this was coming. I knew that the Governor was going to attack the prison. He’s the bad guy, its in his DNA. Those of you who have read the comics knew this was going to happen. Those of us who didn’t,we will be living in shock for a few days. This show has grown on us, along with the characters, so to see cranage like this is shocking. All in all, this was a good mid season finale. The show will come back to them stating all over again.  It’s going to be interesting. This might be what was needed to jump start the action of the show again. I still want to know who killed all the freaking rats!