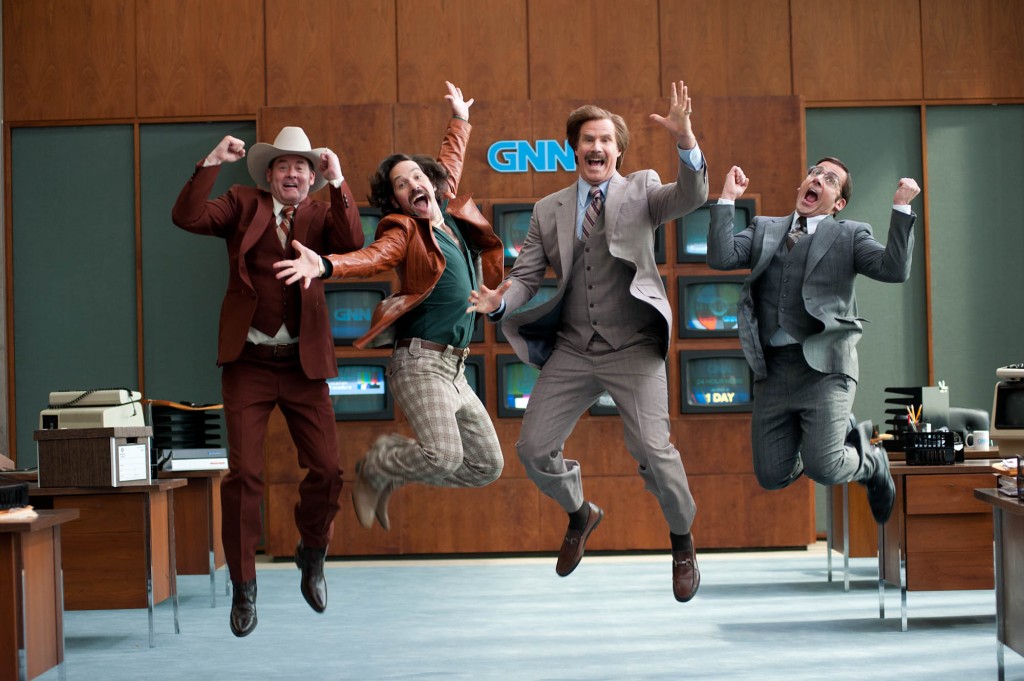 Almost a decade later, we have received a sequel to the cult comedy hit, ‘Anchorman: The Legend of Ron Burgundy‘, which might have not performed all so well at the box office back in 2004, but has become an instant classic on home video. In these past years, we have seen nearly every actor from that film become super stars with a giant fan-base that has been quoting their dialogue from their film all those years ago. Well, we’re here with ‘Anchorman 2: The Legend Continues‘, and I’m here to say that there are enough gut busting laughs for three entire feature films, and I expect this sequel to boast huge ratings and numbers at the box office come this holiday.

We last left Burgundy (Will Ferrell) and Veronica Corningstone (Christina Applegate) as news anchors at a big time network, and we pick up when the two are brought up to the big boss (Harrison Ford), in which an uncomfortable meeting lets the couple know that Veronica has been promoted and Ron has been fired. A few months pass by and Ron has left Veronica and works at Sea World, but the Global News Network (GNN), approaches Ron and hires him as one of the new anchors on the first ever 24 hour news channel in New York City. But what’s Ron Burgundy without his faithful news team?

Soon, Ron is driving a winnebago and out to assemble his news team, Champ Kind (David Koechner) who sells fried chicken, Brian Fantana (Paul Rudd, who hangs out with O.J. Simpson, Robert Blake, and Phil Spector and is also a world renowned photographer of cats, and of course the lovable Brick Tamland (Steve Carell) who supposedly died, but is found speaking at his own funeral. It’s amazing to see just how far Carell has come as an actor since the first Anchorman movie. He was a supporting star back then, but now is making $20 million a picture and has had some pretty straight roles, but he easily slips back into his low IQ character with charm and grace, as he meets his female equivalent played by Kristen Wiig, which is all sorts of awkward and funny.

This hilarious sequel really finds its footing when GNN is launched, which is owned by a rich Australian guy (Josh Lawson) and managed by a stern black woman named Linda (Meagan Good). The lead primetime anchor is pretty boy Jack Lime (James Marsden) in which Ron wagers a bet that he will have higher ratings during his 2am slot than Lime will in his primetime spot.

From here, the script is let go of, and the comedians do what they do best – comedic improv. However, everything seems perfectly timed and well rehearsed as each joke hits its mark perfectly, even if there are some odd edits and a few slow moments. But don’t let that worry you, as this sequel is full of surprises and great moments that will have your laughing till you can’t hardly breathe. They seemed to take a lot of the same jokes from the first film and add to them, for instance Brian Fantana’s cologne collection is now a condom collection, and garners tons of laughs, or the epic news anchor battle with all of the rival news teams come to kill each other, which this time around is packed full of A-Listers. They did a perfect job keeping it fresh and original, while giving us a dose of what we loved from the first film.

Ferrell is once again brilliant as Ron Burgundy. His facial expressions, mannerisms, and dialogue could make the most serious person laugh out loud. And his supporting cast is just as good as he is throughout. Although some of the scenes play out like an SNL skit at times, the laughs, goofy characters, and brilliant dialogue keep this silly movie rolling. ‘Anchorman 2: The Legend Continues‘ is a wonderful sequel and might be the hardest you’ll laugh this holiday season.