The last episode of the “Walking Dead” showed us what the Governor, aka “Brain” had been up to since the fall of Woodbury. He has a new name, a new group and has now meet up with Martinez again. Let’s get to what happened in this episode!

“Brian” and Megan are in the middle of playing a game of chess. He is also doing laundry while she makes a move. She wants him to let her win a game and he won’t. The scene flashes back and forth between the game and Martinez getting both of them out of the walker pit. Martinez asks is he has been on the road all this time and  “Brian” says yes. Lilly then asks him if he is ok and call a him “Brian”. Martinez is stunned at the name change. Back to the game, Megan asks if she’s bad since her dad was always mean to her. Martinez invites the group to their camp, against other members opinion. Martinez is now in change and he warns “Brian” that dead weight will be cast away.  “Contribute or be dead weight.” Megan asks if they will be ok since they are all good and “Brian” is silent. She tells him it’s his turn and he stands there and looks off. He says he is thinking. You see worry in his eyes.

Lily and “Brian” are staying in an RV. He is about to go out on a supply run with Martinez and two other men. They have been in the camp for a little bit. Lily is going to set up a nurses station for the camp. “Brian” is not happy with the RV, but Lily tells him that they will make it better. On the run, they walk upon a lake. “Brian” asks how the fishing is and they tell him the pond is dead. He now has the nickname “One-Eyed Bri”.He is at the bottom of the totem pole now. They are raiding an old cabin in the woods for supplies. They come across a body, with no head, tied to a tree. A sign with the word,”Liar”, is nailed to it. 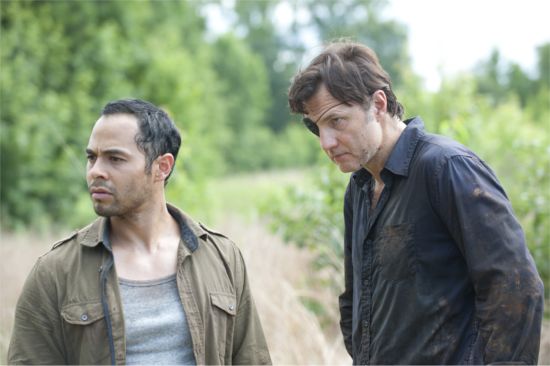 In the camp, Tara meets Alisha and they hit it off. The group comes across another headless body with the word, “Rapist”, nailed to it. When they get to the cabin, they see the owner dead with the sign, “Murderer”, around his neck. He had a picture in his hand of his family. “Brian” takes it. They send “Brian” into the cabin first. They follow him in and end up in a back room.  One of the guys gets attack by a walker and “Brian” kills it. They also find the heads on the floor trying to bite them. Another walker jumps out and “Brian” kills that one, too. The walker was a young boy and “Brian” just looks at him. This look is not a normal look. This looks he has many wheels turning in his head.

Now the Martinez and “Brian” are sitting around the fire. Martinez tells him that if it wasnt for the other people he was with, he would not have brought “Brian” into the camp. Martinez tells him that he looks like he has changed. “Brian” says he has. The other two guys, Pete and Mitch, come in with food and beer. They are talking about how the man who owns the cabin had his wife and daughter in there. Martinez is watching “Brian” closely. The two other guys are brothers and were in the army.  Mitch took a tank when everything hit. “Brian” will not talk about his past. 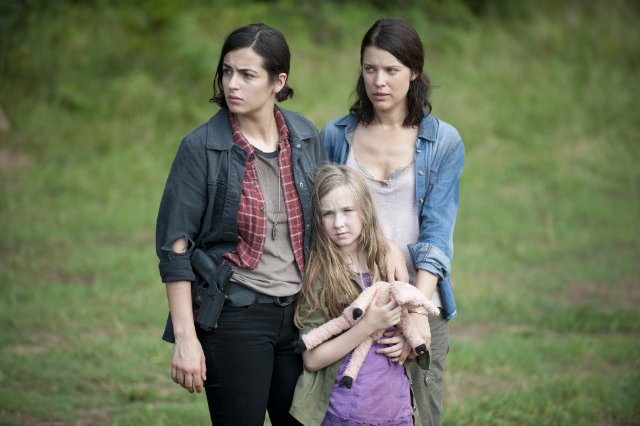 The group has come back to the camp. Martinez is drinking and eating with the rest of “Brian”’s group and Alisha. Martinez gets up to drink and can hardly walk.  “Brian” goes back into his RV and Martinez knocks. He has a surprise for him. Martinez is hitting golf balls on top of the RV and “Brian” is watching him. They are talking about one of the guys who died after Woodbury ended. Martinez is talking about how “Brians” family brought him back. Martinez is talking about how brave he is to have another family and the risk of losing them. Martinez is talking about the both of them sharing responsibility when “Brian” hits him in the back with a golf club. Then he drags Martinez to the pit with the walkers, dangles him for a little bit and tells him that he doesn’t want it, and lets the walkers take Martinez. Here is the beginning of the end of “Brian”. Seriously, we all saw that coming. I knew and most of the people watching knew that he was going to break eventually. It was only a matter of time.

So now it is nightfall and “Brian” is sitting on the bed. Lily and Megan come back into the RV. “Brian” is having a mini meltdown and shaking. He tells Lily that he had a bad dream. She asks what it was and he couldn’t remember. The group gets a new leader, Pete. The two brothers and “Brian” go on a hunt. Pete asks if “Brian” wants to help him. The three of them come upon a small  group in the woods with lots of supplies. Pete wants to take them in and the brother wants to rob them. Pete says no and they go hunting for squirrel. “Brian” decides to go back to the camp and sees that everyone is now dead and the supplies are gone. One of the campers is still alive and Mitch kills him.

The group heads back to the camp. “Brian” wants to leave the camp. He doesn’t believe the camp is safe under new management. He takes his group and Alisha with him. While driving, they come across a mud pit with a bunch of walkers in it. “Brain” gets out to look at them and then turns around to look at the people in the car. They go back to the camp. While everyone is asleep, “Brian” puts on his gun. Lily asks what he was going and he says ”Surviving.” He goes to Pete’s RV and kills him. Then he goes to Mitchs RV and points a gun at him. He tells Mitch that he killed Pete. He thinks Mitch was right about the camp. He tells Mitch a story about his childhood and how his brother helped him and was a hero. “Brian” is going to tell people that Pete died a hero on a run and dumps his body in the lake “Brian” is going to take over the camp and wants Mitch to join him. The Governor is now back. 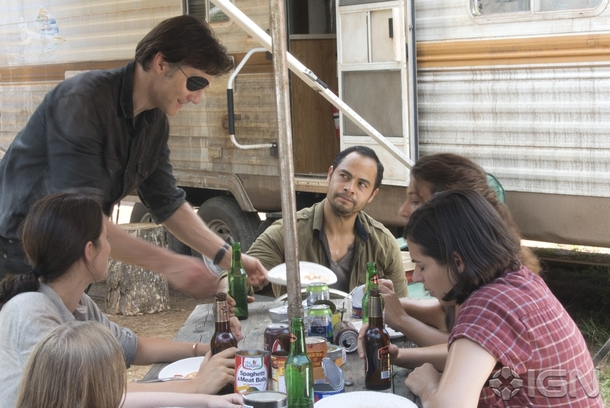 The Governor has taken over the camp and is building walls. He is telling people to avoid strangers. That night, he circles a place on a map. He wants to move the camp. Lily doesn’t want to move the camp. The next day, The Governor is clean is bad eye. Lily comes in a sees it.She tells him that he does not have to do it alone.  Megan and Tara are playing tag outside and a walker almost gets Tara.  The Governor shots it in the head and walks away. He goes to the lake and sees walker Pete in the water. You start to hear the Governors theme music. He then drives his truck into the woods. This is when he sees Rick and Carl planting. He then walks and sees Michonne and Hershel burning bodies. He aims his gun at her.

Ok….so we all knew this was coming. He is going to go after the prison. He finally has re-embraced his leadership qualities and will lead the small group into a war with Rick and his group. At least he has a tank. Rick doesn’t have a tank, but Rick has way more ammo.   I am curious to who took the supplies in that little camp. Was it Carol? Is she lurking around the prison walls? The next episode should show exactly how far the Governor will take this. I also refuse to call him “Brian” now. He is now back to being the Governor. Let me know what you think.