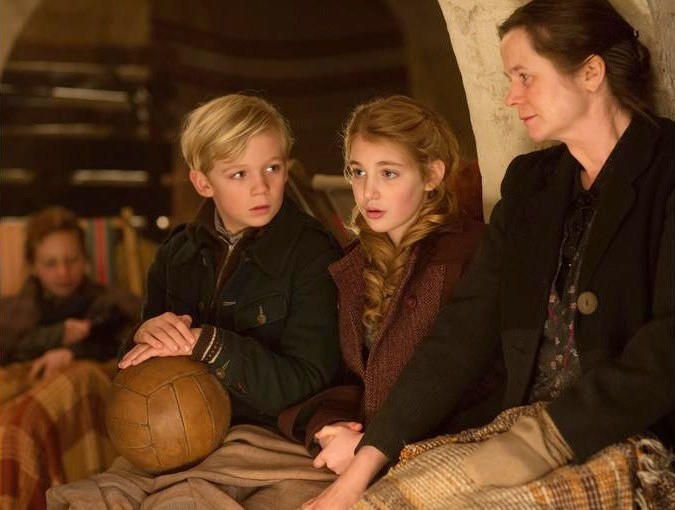 For some reason, 20th Century Fox wants to compare ‘The Book Thief‘ with the Oscar winning film ‘Life of Pi‘, because in the trailers for ‘The Book Thief‘, it says “From the studio that brought you ‘Life of Pi’. Sure, you can argue that both films come from novels, deal with survival of the most dire consequences, and have a ton of symbolism with life, death, love and God, but I don’t understand why you would want to compare the two, other than drive audiences to see the film, with the hopes that it will garner a decent amount of awards and a giant amount of cash like ‘Life of Pi’ did. Unfortunately, I don’t think ‘The Book Thief’ will accomplish these goals. It won’t succeed in these goals, not because of the filming, acting, or story. Those aspects are very good. It’s the execution, pacing, and the too many “on the nose” cheesy sentimental moments that ultimately make this film fall in the deep dark cracks of the cinema basement. That, and the lack of big CG effects, a beautiful colorful world, and a big tiger. Based on Markus Zusak’s novel of the same name, director Brian Percival (whose only claim to fame is a couple of episodes of ‘Downton Abbey), relies mostly on his cast to keep this film trucking along. This is not a happy movie by any means, and actually starts out quite grim as we meet Liesel (Sophie Nelisse), a young girl with her mother and younger brother, who board a train, but who do not know that their mother is giving them up for adoption. And on the way to their new family, the younger brother dies, as the narrator informs us over the grim images. In fact, the narrator is death himself.

On the other hand, the execution of the filming is less than thrilling, literally. At no point in time, did I feel suspense or scared for anyone really, and for being a WWII film, focusing on the rise of the Nazi party, the film is not doing its job. Particularly in a scene where the nazis are searching everyone’s basements to capture hidden Jews. It would have done Percival some good for him to watch Tarantino’s ‘Inglorious Basterds’, especially that opening scene, to capture some suspense and scary moments for his film, but I guess he missed that class. Some of the dialogue is cheesy and too “on the nose” for my liking, and it seemed like their were four separate endings to the film, which all were good, but didn’t flow well. The cinematography by Florian Ballhaus was beautiful and majestic and the score by John Williams (yes, that John Williams), is one of the better scores in a film in a long time. I’ve seen better WWII films and better holocaust films, but ‘The Book Thief‘ does do a good job when it isn’t trying to suck us in an emotional black hole. That being said, it’s still worth a look.