Destin Daniel Cretton’s film ‘Short Term 12‘ is in my Top 5 films of the year. This candid look at life in a big group foster home for trouble kids is natural, endearing, and brutal all at the same time. I was completely moved and fell in love with each character in its 96 minute run-time, and didn’t want to leave them when the credits started to roll. This film is more of an ensemble drama with Brie Larson and John Gallagher Jr. taking the more meaty roles. This captivating film will pull at the heart strings, but won’t leave you depressed like so many of these similar films have done before. I cannot wait to see this again and again.

Grace (Larson) plays one of several adults who work at a sort of compound for troubled kids – or group home. These kids are supposed to be placed here temporarily, but often get overlooked by the system and end up staying long term. The goal is to get these kids to a good family who loves them. One of the other counselors is Mason (Gallagher), who is an amazing and funny laid back guy and is secretly dating Larson. Mason is the kind of guy you want to be life long friends with.

The counselors are told strictly to create a safe environment and make sure none of the kids are hurting themselves or others. They are not to act as therapists, friends, or doctors. However, we see Grace and her fellow colleagues going above and beyond to make these kids feel genuinely loved, because in fact, they do love each of them. And we see that these kids feel more comfortable with Grace and Mason as they let them in on some of their horrible past that they won’t even tell their real doctors or therapists. 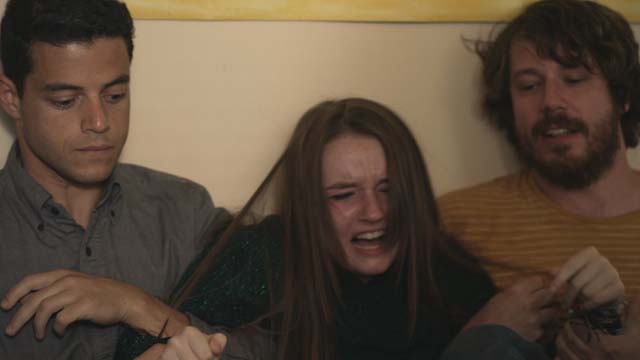 For instance, one of the older children in the home, Marcus (Keith Stanfield), an 18 year old, allows Mason to hear a rap he’s been working on, which details his childhood from his prostitute mother who made him sell drugs and then beat him. Or when newbie Jayden (Kaitlyn Dever) arrives at the home and does not want to be a part of the system, she eventually opens up about her abusive life to Grace in the form of a kid’s story she wrote, that might just be all too familiar for Grace herself, and we being to see that the counselors might have more in common with their kids than meets the eye.

Every scene will leave you breathless with its charm and drama, and will make you want to give each of these characters a long hug. What’s so great is that, this never feels overly done or go into explicit dark territory. The moments feel real and genuine and while you might look at this story on paper and think, “This is gonna be rough”, you’ll come out the other side with a smile on your face and will be glad you took the ride.

Brie Larson deserves an acting award for her role in this film. She is a top notch actor, who I feel can compete with Meryl Streep, Cate Blanchett, and Helen Mirren. Her wit and emotional breakdowns are true-to-life, and even when she might be making a mistake, we still love her. Gallagher Jr. is as always amazing to watch on screen. His comedic timing and ability to deliver a story is impeccable.  And Cretton’s direction is beautiful and magical, and shows every little quirk in these characters.

‘Short Term 12‘ might just be the best film of the year.

When I’m not eating cake covered in Lucky Charms and making my old He-Man toys scissor each other, wait… I think I missed a step in there somewhere. I’m guessing something was either ingested and/or inhaled. Any-who, I write for a major online outlet, make films, and own a comic book store. Boomstick Comics!!.