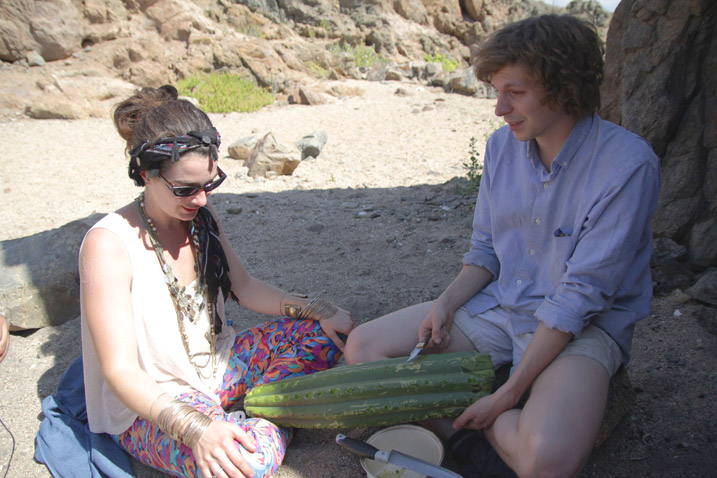 It’s hard to describe a movie about an older and very goofy looking Michael Cera playing a drug obsessed twenty something traveling through Chile to find this crazy hallucinogen, while making an unlikely friend along the way and having a revelation somewhere in there. However, I think I just did.

‘Crystal Fairy‘ is just bizarre, but not in the way you would expect a movie about drugs to be bizarre.  There are no crazy psychedelic scenes, just a story about a hipster hanging out with Latin kids and meeting “Crystal Fairy,” a cooky American girl (Gaby Hoffman) going through her own self realization journey. Hoffman hasn’t been in the spotlight in a number of years, but is most known for being the daughter in ‘The Man Without A Face’ and ‘Uncle Buck’.

Penned and directed by native Chilean Sebastian Silva, and co-starring his three brothers, it seems like the Silva boys have some firsthand experience dealing with American tourists “finding themselves” in their native land.  Cera’s character is penned as a confused man-boy that is irritating in that way that Americans are so good at being.  Crystal Fairy, on the other hand, is naïve, not confused; silly, not irritating; innocent, even in an unlikely setting.  Most people will recognize her character as some girl we used to know in high school that kinda bugged us, but you knew was good at heart.

This is like a coming of age film, except I’m not sure what the characters are coming into.  It just feels like a film about life and realization, and through its drug induced journey, it really is a sweet story about off beat characters.  Incredibly entertaining, a good experience, some genuine laugh out loudness, kinda like “Y Tu Mama Tambien,” only with a little less Spanish.