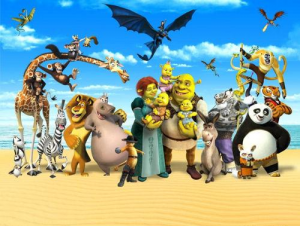 DreamWorks Animation Studios and Netflix are doing well monetarily these days, and it’s only fitting that both companies have struck an epic deal that will last over the next several years. Both companies announced today that DreamWorks will start making new and original content exclusively for Netflix. The new series featured will be inspired by the iconic DreamWorks characters as well as ones from the Classic Media Library it purchased last year.

The first show will air in 2014, however DreamWorks will produce a new animated series called ‘Turbo F.A.S.T.‘, which will be available by Christmas of this year on Netflix. So what does this mean for us, specifically?  Well, it means we might get some tv shows in between DreamWorks theatrical releases to keep the hype up between projects. In addition to that, we might get some new and original characters as well.

Some of DreamWorks characters and movies include: ‘Shrek‘, ‘Kung Fu Panda‘, ‘How To Train Your Dragon‘, and ‘Madagascar‘. Those are HUGE franchises, and I’m sure we will see new content with them over the next few years exclusively on Netflix. One of DreamWorks properties I would love to see new content for is ‘Antz‘. I loved that movie.

This agreement, which marks the largest deal for original first-run content in Netflix history, is also the first time DreamWorks Animation’s beloved characters will be introduced into the television market as a branded collection of shows.

The groundbreaking deal, which encompasses over 300 hours of new programming, is a cornerstone of a major initiative by DreamWorks Animation to greatly expand its television production and distribution worldwide. The new shows will be inspired by characters from DreamWorks Animation’s hit franchises and upcoming feature films as well as the vast Classic Media library, which DreamWorks acquired in 2012 and includes some of the most popular animated characters in history.

With the first series expected to begin airing in 2014, Netflix will premiere these new DreamWorks Animation shows in all the territories in which it operates.

“DreamWorks Animation is a valued partner in our global efforts to provide families the most engaging stories delivered however, whenever and wherever they want,” said Netflix Chief Content Officer Ted Sarandos. “This deal represents a major expansion of what’s already a phenomenal relationship, allowing us to bring beloved DreamWorks characters to the 40 countries where Netflix operates and setting the stage for us to innovate together as we expand into new markets.”

“This is an unprecedented commitment to original content in the internet television space,” said DreamWorks Animation Chief Executive Officer Jeffrey Katzenberg. “Netflix is a visionary company that continues to redefine the way audiences watch television and it is a thrill to add to their growing momentum.”

In February, Netflix and DreamWorks announced their first ever Netflix Original Series for kids based on the highly-anticipated film Turbo, premiering on July 17. Turbo F.A.S.T, an episodic animated series which picks up with the speedy snail where the feature film left off, will be available in all Netflix territories beginning in December.

Also coming exclusively to Netflix in the U.S. and Latin America next year will be new DreamWorks Animation feature films, beginning with the global hit The Croods, which grossed more than $575 million at the worldwide box office , followed by Turbo and the big screen adaption of Mr. Peabody and Sherman, which opens in theaters in March of 2014.

Always commercial free, the content in the kids section of Netflix is curated in conjunction with ratings and reviews from Common Sense Media, a leading non-profit organization that provides independent, trustworthy ratings, reviews and information to help parents make great media choices. In addition to character-based selections, the service displays rows of TV shows and movies organized by easy-to-understand genres such as superheroes, princesses, dinosaurs and girl power. The unique Netflix technology provides each member with a personalized experience based on preferences and favorites.