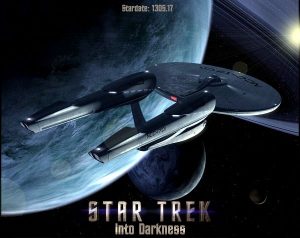 It’s very difficult to give a review of “Star Trek: Into Darkness” without going into a ridiculous amount of spoilers, so I’ll just start by saying that it is a damn good film, executed brilliantly with enough originality to bring in even the most ignorant of the Star Trek universe, but also bringing familiar material that will make Trekkies go totally titillating for tribbles (hell yeah alliteration!)

Abrams continues the saga he set into motion with his 2009 venture, in which he introduced to a new generation timeless characters who are adored by so many.  Four years later, we see the crew of the Enterprise no longer strangers learning to work with each other, but as a true team ready to face new challenges.

Visually, this film is simply astounding.  Abrams uses fluid camera movement in every scene, from the slowest panoramic moments to breathtaking space battles.  There is action on alien planets, hand to hand combat, lasers, explosions, terrorism, crashes, IT’S EVERYWHERE!!!  This film is action at its finest, proving that sci fi can amaze audiences of all types. 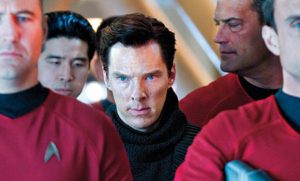 But if this were all action, then it wouldn’t survive as a Star Trek film.  The reason Trekkies love Star Trek is because we love the characters.  Pine and Quinto have truly earned a chemistry that, though it may not surpass Shatner and Nimoy, certainly has a life of its own.  The tension, disagreements, and quirky snirks between the two feels completely natural as a side effect of a growing friendship.  This film will showcase how this friendship becomes what we historically know it as, and it’s wonderful to watch.

Now, that plot that I can’t talk about, all I’ll say is that it may seem a bit superficial, but is definitely complex enough to establish a standalone film.  In many ways it is much better formulated than what we saw in the 2009 film.  It has a few twists and turns, and those turns will be much more fun for the well versed.

This may be Abrams’ best triumph to date.  It surpasses the already great Star Trek of 2009.  No, it is not Roddenberry’s Star Trek, not by far, but it honors Roddenberry’s legacy while making a new story for a new generation.