‘Veronica Mars’ Is Coming Back As A Feature Film With Our Help!!! 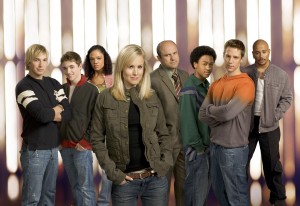 Good news, everyone. ‘Veronica Mars‘ is coming back in the form of a feature film. However, it’s all up to us. I’ve been watching the series all over again recently and constantly sing “A long time ago, we used to be friends, but I haven’t thought of you lately at all”, and I can’t tell you how much I miss this amazing series.  Kristen Bell, who played Veronica Mars and show creator Rob Thomas (no, not that Rob Thomas), have constantly said they loved doing the show and would love to return to it.  Well, now it seems like they might get that chance.

The series was cancelled in 2007 after its third season, which outraged fans and prompted people from across the globe to send MARS candy bars to CW, in hopes of bringing it back.  However, every attempt failed.  Bell told EW,  “ We all became so close, and the cancellation of the show left a huge hole in my heart. I would have put on Veronica Mars: The Circus to bring it back.” So, you know she and Thomas are definitely in for more Veronica action.

Thomas and Bell have set up a KICKSTARTER campaign to raise funds for a low-budget ‘Veronica Mars’ film, which would be shot this summer with a release date in early 2014. They hope to have everyone from the original series back to reprise their characters and the fundraising goal is a mere $2 million dollars with tons of cool perks. They just launched the campaign earlier today with 30 days to go and within a few hours, they have reach over $230k.

If the goal is reached, Warner Bros. will market, promote, and distribute the film in theaters, VOD, and on iTunes.  However, if they don’t reach the goal, there will be no movie.  You can pledge anywhere from $10 to $10k and you will receive a shooting script of the film if you donate $10 or a speaking part in the film if you donate $10k. Not too shabby.  I only hope that if they raise more money for the film, they will do more movies or potentially bring back the series for one more season.  How amazing would that be?

I really hope this turns out well for everyone, and be sure to HEAD OVER TO THEIR KICKSTARTER PAGE AND DONATE!