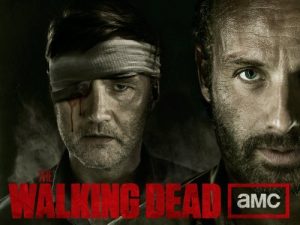 Hello The Walking Dead fans. I hope you enjoyed the show last night like I did. Even though there wasn’t a lot going on during last night’s episode, there was some pivotal character changes. Let’s get to it.  The show starts in the prison. Everyone is talking about whether they should stay at the prison or find somewhere else to go. Rick does not want to run and Glen is backing him up. Merle tells him that they are living like rats. He thinks they should have already left. Merle says that the Governor probably has scouts around the jail and will eventually try to starve them out. Hershel says that they should leave.

Rick begins to walk away from everyone and Hershel calls him back and tells him to step up.  Hershel reminded him that he is the one that said that this was not a democracy and that he put his family life in Ricks hands.  He told Rick to do something.  Rick goes outside and looks scopes out the perimeter. He sees something in the trees and looks away. When he looks back it is gone. Carl goes out there and tells Rick that he should stop being the leader. Carl thinks that Hershel and Daryl should handle things so Rick can rest.

In Woodbury, The Governor ”Phillip” and Milton are talking about people they can train for an upcoming “war”. Philip wants to add kids who are 13 and up to boost their numbers of people to train. Andrea come in and talks about Philip going to the prison. He tells her that he went to talk to them and that they shot and them first. She asked if Milton knew and he says that he was just informed. Andrea tells him how she is sick of the lies and everything that is going on. Phillip tells her that they are hostel when she says she wants to go visit and talk to them. He also tells her that the roads are blocked and there is no way to get there. She still wants to go so Phillip tells her that if she goes to the prison, she should stay there.  Andrea leaves and while walking outside she overhears conversation between Karen and a guard. The guard is giving orders to her 14 year old son about meeting for training and Karen is refusing. She calls Andrea over there and asks her to do something about it. Andrea tells the guard that he is only training people to defend themselves, not for an army. The guard tells her to wake up and that the only way to defend themselves is with an army. 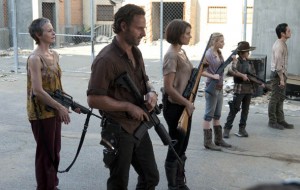 Rick and the group are trying to figure out a way to fix the gate. As they talk about how bad everything is looking, Daryl says that everything will be ok. Glen tells him that that was before there was a “snake in the grass” Daryl tells him again that he is staying and they all have to live with it. Daryl goes back to his cell while Glen is complaining about Merle being there. Hershel tells Glen that Merle has military experience and to “not underestimate his loyalty to his brother.” Glen has the idea to deliver Merle to Phillip and use Merle as a bargaining chip to declare a truce.

Hershel walks in on Merle tapping up his arm. They start a conversation about how Hershel lost his leg and what Rick did for him. He also reminded Merle that Rick gave him more time with his brother. Hershel brings out a Bible and talks about how he lost his way. He begins to quote a scripture and Merle finishes for him. Merle tells him that Woodberry had a damn, fine library and that’s the only thing that he misses from it. Merle tells Hershel that when Phillip get s there, he will kill Merle first, then Michonne and then Daryl. He will then kill everyone else and leave Rick for last. He tells Hershel that that is who Phillip is.

In Woodbury, Phillip is going through all the able bodied people. When he comes to Karen’s boy, Noah, Andrea tells Phillip and Noah is asthmatic. Phillip asks if he can shoot and when he says no, Phillip tells him that he will learn from the best. Karen and Andrea are upset at this.

Carol go and finds Daryl in his cell. She tells Daryl that she is glad that he came back. He asked to what? She says their home and he told her that it was a tomb. Carol tells Daryl that Merle is your brother, but he is not good for you. She tells him to not let Merle bring him down after as far as he has come. 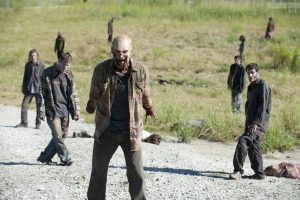 Andrea is looking at the wall as Milton walks up. He tells her that they sealed the wall. Andrea asks him about his knowledge at the prison. He tells her again that he did not know anything about it. She looks relieved and wants him to cover for her. She wants to go to the prison and not to tell Phillip. Milton asks her not to put him in the middle of that. She persuades him to help her. Milton then goes and interrupts Phillip working on his eye. Milton tells him what Andrea is up to and Phillip tells Milton to help her. Milton makes sure that Philip really wants him to do that. Philip says that she’s asks for help so help her. Phillip then tells Milton thank you.

Andrea and Milton are in the woods hunting a walker. They get one and chop off its arms, knock out his teeth, and put a nabber around its neck. They are planning on using it to lure the walkers away from the front of the prison.  They run into Tyresse and his crew in the woods.  Andrea and Milton tell them about Woodberry. Milton offers to take them back to the town.

Merle walks in on Michonne working out. He wants to clear the air with her. Merle tells her that he was carrying out orders to hunt her down. He apologizes and tell her that he hopes they can let things go. 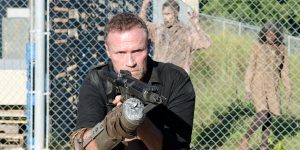 Carl and Maggie spot Andrea coming from a distance and calls everyone out to stand guard and prepare for her.  When they get her inside, Rick pushes her to into a fence and then on her knees to search her. Rick also takes away her backpack. Rick welcomes her back and takes her into the common room. She is shocked at the conditions, but happy to see everyone. Andrea hugs Carol and Hershel. The group tells her about Shane, Lori and T-Dogg.  Andrea asks if she can look around and Rick tells her no. He informs her about what Phillip did and she is shocked. She tells him that she did not know anything about that or that they were in Woodbury. Andrea asks Michonne what she told them. Andrea is upset that she is the odd man out and Glen tells her what happened to them. Andrea points out that Merle was the one who did it. She tells the gang that she is there to make peace. Rick tells her that they plan on killing Phillip. Andrea says that there is plenty of room for them in Woodbury and Merle tells her that that won’t happen. Hershel asks what makes her think he wants to work stuff out and if he said that. She says no and tells them about Phillips plan to make an army for war. Daryl tells her to tell Phillip that when he sees him again, he will take his other eye. She tells Rick that he needs to sit down and have a discussion. Rick tells her that if she wants to help, get them into Woodbury. She tells him now and he says the conversation is over.

Phillip talks to Tyresse and his group about what is going on in Woodbury. Tyresse is sorry about what happened. Phillip is finishing up with them and telling them to head west and avoid going north.  Sasha tells him that they have already been up north. They inform Phillip about their experience with Rick in the prison. Ben tells Phillip that if he needs help, they will help. Tyresse says that they want to stay and earn their keep. Milton asks if they can give them a layout of the prison and Tyresse says that he can try. Phillip is happy with that and tells them to rest and that they will talk tomorrow. Phillip says they can stay as long as they want.

Andrea and Carol talk as Andrea holds the baby. Andrea is told about how everyone died. Carol tells Andrea that she can fix all of this by sleeping with Phillip and getting rid of him when he least expects it. Rick gives Andrea a car to drive back to Woodbury.  Andrea tells everyone to take care and Rick gives her a gun and tells her to be careful. Andrea then drives back to Woodbury. She gets back and is asked to get out of her car with her hands up. She goes and sees Phillip and tells him about her going to the prison. She tells them about the conditions and who is there. He asks if they sent her back here and she says no, that was her call. He asks why and she looks down. He tells her that she belongs here and kisses her.

Beth is singing as everyone is gathered around some lanterns and listens. Rick goes and talks to Daryl and Hershel about Andrea. Rick says that she is in a jam. Hershel says that they are all in a jam and Rick says that he is going on a run. Daryl wants to go and Rick tells him to stay there and watch Merle. If anything happens it is on Daryl. Rick is going to take Michonne and Carl with him. You see Carl walking outside and looking at all the walkers in the field. The scene goes to Andrea lying in bed with Phillip. She gets up and gets a knife to points it at him. She changes her mind and turns around to looks out the window.

As I said earlier, there was not a lot of action going on but you see some changes in characters. Merle is starting to show a different side to him. You see him wanting to fit in and be included in the group. I think the fact that his brother is alive has given him a new sense on life. Michonne comes out and admits how angry she is at Andrea. You can see the hatred that she has for Phillip and Woodbury. I believe that this will be pivotal in the showdown between Rick and Phillip. Andrea’s character is not surprising to me. She has always wanted to fit in and feel wanted, no matter who the attention is coming from. She has chosen the side that she wants to be on. I personally hope that she gets her butt handed to her. The lines are drawn and the people are getting ready. I can’t wait to see what happens.