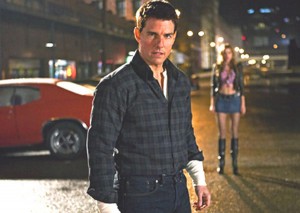 I was pleasantly surprised with the film adaptation of Lee Child‘s novel series on the character ‘Jack Reacher‘.  I was sorely let down by the film adaptation of ‘Alex Cross‘, and did not want another stinker like that.  Well, when you have talent like Christopher McQuarrie and Tom Cruise, expect a strong script, great character development, and one hell of a fun thrill ride.  ‘Jack Reacher‘ hits the mark in more ways than one.

If you’re familiar with the ‘Jack Reacher‘ book series, you might think that Tom Cruise is too small to play the role of Reacher as the character in the book is over six foot five and stacked. Don’t let that minute detail dissuade you from watching this, because Cruise just owns this role, even if he is under 5’10.  One of the things I enjoyed was that there wasn’t any technology used to solve the crime, unlike Cruise’s ‘Mission Impossible‘ where there is a new gadget every two minutes.

Here, Reacher does not own a phone, use credit cars, and even travels only by bus as to  stay off the grid. All we know about Reacher is that he was in the military at one point and he is know for solving very difficult crimes.  As we witness a very unsettling opening sequence as a sniper sets up his rifle in a parking garage looking over Pittsburgh’s baseball stadium and seems to randomly target five people. 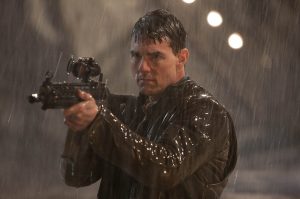 The suspected shooter is quickly found and taken in and is beaten to a bloody pulp by police and other prisoners for his alleged crime.  Once he awakens, he says one thing.  “Get Jack Reacher”, who all of a sudden appears in town at the bedside of the suspected shooter.  Reacher meets the other characters here including Detective Emerson (David Oyelowo), the detective who made the arrest; Helen Rodin (Rosamund Pike), the suspected killer’s lawyer; and District Attorney Rodin (Richard Jenkins), who is also Rodin’s father.

We immediately see that Reacher is always a couple of steps a head of the game and everyone else as he notices minute details about the crime scene and can provide a background on the killer as he once knew him from his serving days in Iraq.  We also see how much of a badass he is when he’s set up in a bar and challenged to fight five guys at once, which he wins in a matter of seconds by showing off his impressive hand-to-hand combat skills.

As Reacher finds out more and more about this horrific crime, things get very dangerous for him and the people he has talked with, especially Helen.  People are dropping left and right and Reacher is constantly looking over his shoulder and dodging bad guys until the very end.  This tale is full of twists and turns of who to trust, lies and betrayals. This was a very satisfactory film. 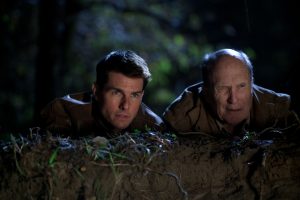 Cruise plays Reacher perfectly.  His own stunts and own fight choreography go a long way and looks very realistic as this film showcases more of the fist to fist fight, which at times is very brutal.  And Tom definitely doesn’t seem to act his age either, that being over 50. Rather he acts like a very spry 30 year old with quick agility and very forceful punches and kicks.

The story itself is if very well paced and there is never a dull or slow moment.  Things flow nicely and never seem to get off tangent.  I for one welcome a sequel to the ‘Jack Reacher‘ series as this was a great starting off point.  And let’s hope to see the team of Cruise and McQuarrie work together on future films, especially with a fun car chase in this one, I hope McQuarrie directs Cruise in the next ‘Mission Impossible‘ and provides an equally good car chase.  You will have a fun time with ‘Jack Reacher‘.