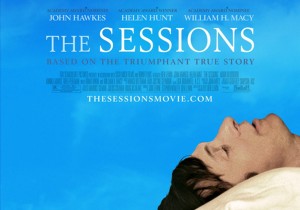 I know I’m a tad late with this review, but here it is and I highly recommend it.  Ben Lewin’s film, ‘The Sessions’ is a remarkable film.  The performances that John Hawkes and Helen Hunt give are worthy of any acting award, and Lewin’s ability to tell such a magical and funny tale is done perfectly.  Lewin mixes the art of sex with ethics, humor, religion, and love in a way that you want more.  ‘The Sessions’ is a must see.

‘The Sessions’ follows the real life man, Mark O’ Brien (Hawkes), who when he was a kid developed polio causing him to lose the use of all of his body except his head and his penis.  Mark is a normal guy who went to Berkeley and had his own house and friends.  In his mid 30’s now, Mark struggles with relationships and never having had sex before.  By day he is wheeled by hired help around on a gurney and at night he sleeps in an iron lung. And to quote the film, from the neck down “My muscles don’t work so well.” 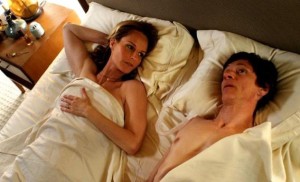 He makes his living as a fairly successful writer and poet.  One of his journalistic assignments is to write about sex among the disables, a subject he is and isn”t all too familiar with.  Mark embarks on a journey to interview several people with varying disabilities and ask them about sex.  That’s when he gets the idea in his mind that he has definitely got to have sex.

However, he has a couple of obstacles in his way.  One is the obvious one, which is his condition and the task of finding someone to have sex with him.  The other is his religion.  Mark is a somewhat religious man, and he talks to Father Brendan (William H. Macy, who still looks like his character from ‘Shameless’).  Mark questions the whole pre-marital sex subject with Brendan and knows good and well that it is looked down upon in Catholicism.  However, Father Brendan, is a decent guy and undertands Mark’s situation and gives him his blessing.  They even become friends outside the church. 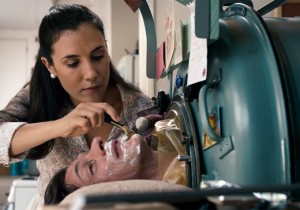 Mark doesn’t have much luck at first, but hears about a sex therapist named Cheryl (Helen Hunt).  Cheryl’s job is to help people conquer their fear of being intimate, which includes anything from touching to full on sexual contact.  I believe the term is a sex surrogate, in which the therapist actually has sex with her patients.  From here, Cheryl helps Mark with his problems and they both develop feelings for each other.

It’s a very tender and sweet film, one I think will be nominated for a few oscars.  Helen Hunt is fully nude in this film several times, and by her being 49 years old, she looks pretty good.  Both Hunt and Hawkes are amazing in this film.  Hawkes especially, as you don’t even see an actor, but the actual Mark O’Brien on screen.  I highly recommend this film.  It’s very enjoyable.