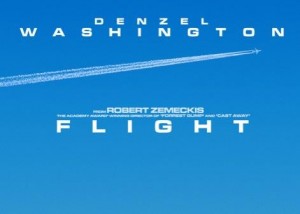 ‘Flight‘ is a huge and very warm welcome back for director Robert Zemeckis, who for more than a decade now has been making animated motion capture films including ‘A Christmas Carol‘ and ‘The Polar Express‘.  With ‘Flight‘, he is back where he belongs, with big stars and big set pieces.  I’ve really missed Zemeckis’s work over the last decade in the live action arena.  Zemeckis directed the ‘Back to the Future‘ films and ‘Forest Gump‘ to name a couple.  And now, with ‘Flight‘, Zemeckis has proven that he has not lost his touch in any way as this film provides amazing and heartfelt characters, one of the most thrilling plane crashes ever filmed, and beautiful photography.

‘Flight‘ centers on Whip Whitaker (Denzel Washington), a middle aged pilot who is not above drinking a whole bottle of alcohol, doing a few lines of cocaine, having sex with a flight attendant, and having a joint only minutes before getting into a cockpit of a full commercial airliner and piloting the craft safely as we see in the opening scene.  Even in the pilot seat, Whip continues to drink and even at one point falls asleep, however his long service with the airline has proved he is one of the best pilots out there, which seems to let Whip get away with acting half his age.

During this short one hour flight is one of the best plane crashes I have ever seen on film.  Zemeckis did a phenomenal job in articulating this terrifying scene that will thrill and horrify all audiences.  When the plane takes off, the skies are pouring down rain with turbulent winds and frequent lightning.  Whip sees a small gap in between two large storm clouds to inch his way through at top speed to get above the storm.  Whip puts the plane in high gear, scaring the co-pilot (Brian Gerety) and everyone on board, but after a few seconds they are above and away from the storm and everything seems calm. 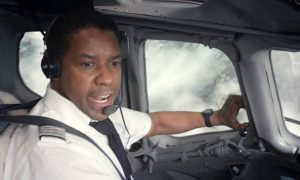 Everything seems well as Katerina (Nadine Velaquez), one of the young flight attendants and Whip’s last night’s female lover is doing a good job making sure the passengers are okay. While Whip is asleep from the drugs and alcohol he did only moments before, the aircraft suddenly loses its hydraulics and begins a fast and uncontrolled nose dive towards the ground.  The engines burst into flames and people start to panic.  Whip takes control and quickly dumps all the fuel and lowers the landing gear and begins to invert the plane, meaning that he forces to fly the plane upside down to gain stability of the airplane.  At the last minute, he rights the aircraft back around and coasts the plane into a field. This plane malfunction should have killed everyone on board this large commercial airliner, but due to Whip’s quick thinking and genius, only 6 people lost their lives with the rest suffering minor injuries.

This sequence was some of the finest filmmaking yo can see.  Everything was realistic and frightening.  The way Zemeckis cut this together was incredible.  After the crash, Whip wakes up in the hospital to be told he has minor injuries and he can be released in a couple of days and that he has become a national hero for his quick thinking and saving all of those lives. As Whip is recovering in the hospital, he is visited by and old flying friend turned pilot union rep Charlie Anderson (Bruce Greenwood) and Harling Mays (John Goodman), Whip’s hilarious drug dealing buddy who is a direct cross between ‘The Big Lebowski‘s’ Walter Sobchak and The Dude.

Bruce congratulates Whip and informs him that blood tests were done on him after he was pulled from the wreckage and the evidence shows all of the alcohol and cocaine in his system, which could mean a lot of jail time. Anderson enlists the help of a high powered lawyer Hugh Lang (Don Cheadle)  for Whip in case things get out of control.  The first thing they tell Whip is to stop drinking and doing drugs and get rid of all these substances, which Whip is not too keen on doing. While Whip is in the hospital, he meets a beautiful patient Nicole (Kelly Reilly), who is in the hospital for a heroine overdose.  Whip becomes smitten with her. 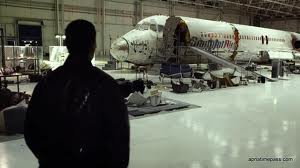 In order to dodge all of the media and interviews, Whip and Nicole head to Whip’s dad’s farm in the country. From here on out, Whip confronts his personal demons and struggles with addiction.  This might be one of the top the roles for Denzel Washington.  Washington plays Whip so well that you can’t even tell it’s Denzel on screen.  His layers of depression, denial, rage, and drama are out of this world.  You really want Whip to overcome his obstacles and be truthful. Even if it’s to his ex-wife and estranged teenage son, who Whip has never really been a part of his life.

‘Flight‘ is a great film with some brilliant performances by everybody involved, especially Denzel.  I wouldn’t be surprised if he was up for an Oscar for this role.  The images and direction are top notch and the crash scenes again, is one of the best if not the best I have ever seen.  I highly recommend ‘Flight‘ and hope that Zemeckis is back for good in the live-action genre.