Bryan’s Review of ‘The Trouble With The Curve’!!! 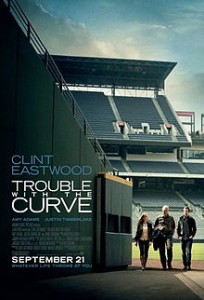 Clint Eastwood did NOT direct this film. In fact, this is the first film he has acted in for another director since 1993.  Can you guess what that film was?  Here’s a hint.  Rob Lorenz, the long time producer of the last dozen Eastwood films, marks his first effort as a director.  And it seems that Eastwood held his hand the entire way.

Eastwood plays Gus, an aging baseball scout who hates any form of technology.  Gus relies on his instinct to find the perfect baseball players, not charts, numbers, or computers.  Gus is a widow who lives alone in his last days of his job at the Atlanta Braves as a baseball scout.  We meet Gus at his lonely house as he struggles to take his morning piss.  His eyesight is for the most part gone, so he is constantly stumbling into his furniture.  So, Gus relies on his hearing to pick players.  He’s the last of his kind.  The rough and tough Eastwood we have come to know over the past several decades. 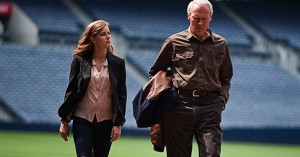 The Braves hear of a kid who has the potential to be an all-star in professional baseball, and with the help of Gus’s long time friend Pete Klein (John Goodman), the management allows Gus a last scouting journey.  However, Gus can’t do this alone, so Pete enlists the help of Gus’s only daughter Mickey, (Amy Adams), a high-powered successful attorney who is on the verge of becoming partner.  Yes, she was named after Mickey Mantle as anyone could have guessed when she was first introduced, but midway through the film, we had to be told how she got her name.  Like I said above, we were all force-fed everything.

Mickey has a bitter relationship with her dad since her mom died when she was young.  Mickey was pawned off on relatives, so that her dad, Gus could travel and scout.  Low and behold, Pete got to her and she decides to go on the scouting trip with her father to re-connect.  Once Mickey shows up at the first game, Gus is surprised she is there to help him out and Gus tells her constantly to go home, as he doesn’t need her or anyone’s help.  But, Mickey sticks around a bit longer after she meets Johnny Flanagan (Justin Timberlake), a young scout for a different team.  Johnny Flanagan might be the most absurd and cheesiest name in cinema history. Flanagan charms Mickey enough for her to stay and re-think her life. Now Gus, Flanagan, and Mickey are all following a certain player around to sign.  That potential player is Bo Gentry, a chubby power hitter, who home-runs nearly every time he is up at bat, and has a terrible attitude.

From here on out, we are forced watch cheesy moment after corny moment as our characters deal with their own personal struggles of getting old, falling in love, and doing the right thing.  It’s all very predictable and very cliche.  In some of the more tender moments of ‘Trouble With The Curve’, I found myself laughing on how hokey it was.  A perfect example is that the rough and tough Gus sits down at his dead wife’s grave.  He begins to cry and sort of sing ‘You Are My Sunshine’, but it’s in Eastwood’s trademark voice, so it comes across more like Dirty Harry.  As he is singing this, the camera pushes forward to Eastwood’s teary eyes.  This is supposed to make the audience cry, however, it was met with laughter.  Even when the scene is supposed to be over, Eastwood gets up and the musical number to ‘You Are My Sunshine’ starts playing with a female off-screen voice singing the lyrics. 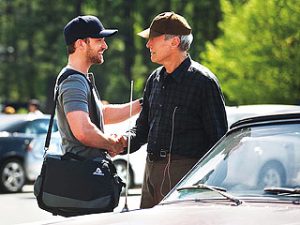 The whole film was riddled with these types of scenes.  Justin Timberlake did an okay job with what he was given, and it’s not a Timberlake film without him singing and or dancing, so prepare yourself, you’ll get just that.  Amy Adams is the best part of the film.  She is very likable and just brightens up the screen with her beauty and baseball knowledge.  Eastwood tries to be the funny, mean old man, and he accomplishes that, however it never flies over the center field wall.  John Goodman, Matthew Lillard, and Robert Patrick all do an good job for the most part.  You remember Lillard from this film and Robert Patrick from this film.  Oh and, George Wyner makes a very small and brief cameo, which was AMAZING.

If you’re a fan of baseball, I’m sure you’ll want to see this for the baseball references and to put another mark on your wall of baseball films you have seen.  Sadly, I think this film would have done better if it had Kevin Costner in it.  The film has decent moments, but the cheese outweighs all.  This baseball film can be benched for the season.