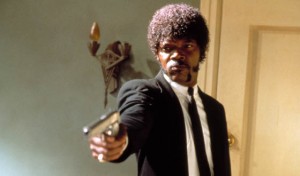 Hi folks.   Sorry for the lack of awesome news an updates.  It’s very busy here at Boomstick HQ.  Some really neat thing lined up in the next week or two.  So bare with me.  Thank you.  Now onto some BADASS news.  Samuel L. Jackson is joining the cast of the remake of ‘Robocop’.  Remember, I’ve been talking about this remake for a while and last time I talked with Peter Weller (the original Robocop), he was not enthused about this remake.  THis might change his mind.

Joel Kinnaman is playing Murphy (Robocop) with Jose Padilha directing.  Gary Oldman is the scientist/inventor of the cyborg.  Jackson will play Pat Novak, an energetic TV mogul and a very powerful force in the Robocop world according to THR.  Filming should begin in Toronto in September if all goes to plan with a summer 2013 release.

Kinnaman could be seen in AMC’s ‘The Killing’.  I really hope Sam Jackson just amps it up to 11 for this film.  By this casting decision alone, I’m interested again in this project.