James Cameron Says He Wants to Make a Sequel to ‘Prometheus’!!! 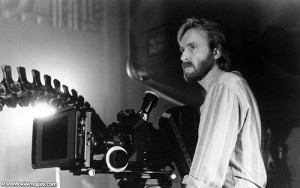 Director James Cameron recently spoke with the good folks at GuardianUK and mentioned that he wants to make the sequel to Ridley Scott’s ‘Prometheus’.  Let’s not forget that Ridley Scott directed the first ‘Alien’ film while James Cameron followed that up with his sequel ‘Aliens’.  It’s only fitting that the two directors would direct the prequels one after the other.

Cameron just returned to the surface from touching the deepest point of the ocean in a water craft that would document the bottom point of the ocean.  At his ‘Titanic’ 3D premiere, Cameron said, “There’s a gap of a few years between Prometheus and the original Alien, that gap is meant for me to answer all the questions raised in Prometheus.”

He went on to say,  “Ridley came to me, and he saw what I was doing (with Avatar) and the ideas I was exploring, we sat down and talked about Alien, and saw that there’s big ideas hidden in these stories. Where do we come from? What does it mean to be human? This was something that Ridley saw as original and something he wanted to be a part of. I’m not sure if Ridley changed his mind, because the movie (Prometheus) turned out fantastic, but it was during those early talks when he brought up the idea of me stepping in to direct a follow-up.”

As of right now, nothing is set in stone and seems that sources close to Cameron said he has interest in doing it, but is focused hard on the ‘Avatar’ sequel.  He said,  “Right now I’m working on Avatar 2, so if Fox wants to wait … we’ll see what happens.”

First off, we have to see if ‘Prometheus’ does well, which I think it will, and we will have check in with the studio if they want to wait several years for a sequel.

If this happens, this could be amazing.  For the record, I want Cameron to team up with Schwarzenegger once again for ‘True Lies’ 2.