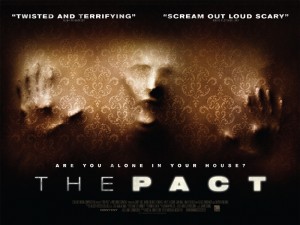 Nicholas McCarthy’s ‘The Pact’ delivers scares and creeps that will linger with you through the next several days.  There are enough scenes to make you jump out of your seat to last two movies.  ‘The Pact’ was originally an eleven minute short film that showed at Sundance last year.  Fast forward a year, and the short was made into a feature length film by the same name.  While the creep and scare factor might keep you on the edge of your seat, the film’s pacing and character development lack the push to make this a great horror film.

Now don’t get me wrong, I enjoyed ‘The Pact’.  But, I can’t see myself watching this more than once.  ‘The Pact’ is part ‘Se7en’ and part ‘Paranormal Activity’, which looks good on paper, but fails in execution.  Most of the film takes place in an old house where we follow Annie (Caity Lotz), a tough-as-nails biker chick who returns home to attend her estranged mother’s funeral.  You get a glimpse of how creepy the film is within the first fifteen minutes.  In the first scene, Annie’s sister is alone in the dead mother’s home, chatting with her daughter via Skype.  Her daughter sees an unknown figure behind her mother and asks, “Who’s that behind you?”  Cue the scary music and the hairs standing on the back of your neck.  Suddenly, Annie’s sister disappears on camera. 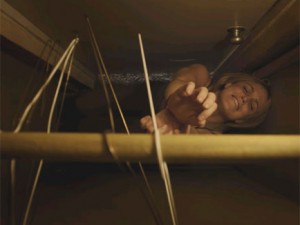 When Annie arrives at the house and can’t find her sister, the haunting begins. We learn that Annie’s childhood was not a happy one in this home. More characters disappear, and we soon figure out the haunting is actually a spirit trying to communicate with Annie to give her information and warn her about the disappearances. ‘The Pact’ turns into a detective story, where Annie enlists the help of a detective and blind psychic to help solve the mystery of the disappearances.

There are plenty of moments throughout the film that will make you squirm, scream, and cover your eyes, but the stupidity and willingness of the main character to make irrational decisions and unnecessarily put herself in harm’s way will make you groan rather than scream.  If you can get past the foolishness of the characters, then you will enjoy ‘The Pact’.  It might not be the best horror film or change the genre in any way, but it definitely succeeds in scaring you.