‘Twins’ Sequel in the Works With Devito, Schwarzenegger, and Eddie Murphy!!! 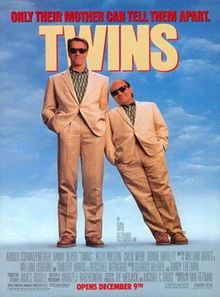 You read that right.  Universal Pictures is currently developing a sequel to the 1988 hit comedy ‘Twins’ that starred Danny Devito and Arnold Schwarzenegger.  The studio is going to call the sequel ‘Triplets’, where Arnold and Danny find out they have another twin brother according to HWR.  Enter Eddie Murphy.

Ivan Reitman who directed the 1st film will serve only as producer on the sequel and there is no word on a director yet.  Also, there is a call out for writers to handle this project.  This film has the potential to be AMAZING.  The first film was brilliant and adding Eddie Murphy to this project just might re-vitalize his career.  Let’s all hope there are great writers and a good director hired for this project.  My vote is for Devito himself to write and direct.  Or get Ivan’s son Jason to helm the project.