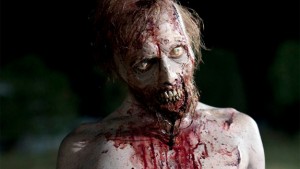 The moral compass of the survivors is tested as Shane and Rick finally agree on the actions to be taken to protect the group. Young Carl’s curiosity ends in tragedy.

Randall finds that custody with the group is all but comforting. Daryl tortures and intimidates the young many until he reveals that the group he had sheltered with consisted of around thirty men with heavy weapons. In his confession, Randall also informed Daryl that he witness the horrors that this larger group was capable of committing.  Daryl reports the information to Rick, who then decides on the spot that Randall must be put to death for the safety of the group.

Absolutely shocked by the proclamation, Dale convinces Rick to allow him the day to try and convince the other members of the group that Randall is not a threat and to let him live. One of the first people Dale approaches is Andrea. He asks her to keep an eye on Randall for a bit. The reason being, Dale does not trust Shane to not outright kill Randall when he finds out that Rick has postponed the execution.

Andrea and Shane discuss the situation at hand. Shane also lets it be known that he believes that it is time for there to be a change of leadership in the group because he still feels that Rick lacks the ability to make the hard choices.

Carl’s curiosity leads him to sneak into the shed where Randall is held captive. Randal does his best to convince Carl to release him. Before Carl can act one way or the other, Shane busts in and pulls Carl away. Shane tells Carl that Randall would say and do anything to try and get their guard down.

After this, Carl wanders into the woods and stumbles onto a zombie stuck in the mud. He toys around and torments the zombie till it breaks free of its muddy confines. Carl flees back to the safety of the farm without a care of what he has just unleashed.

Dale attempts to convince Daryl to speak up on Randall’s behalf. Daryl informs Dale that he does not care about Randall and that the group is broken. When Dale approaches Herschell to try and get him, as the land owner to speak up for the boy. Herschell informs Dale that he doesn’t want to know and that he leaves the decision to Rick to sort out.  Dale even approaches Shane, even though he knows it’s a losing battle. He tries to reason with Shane that while killing Randall doesn’t change the fact that there are thirty of the other group, it will change the group. His argument falls on deaf ears as Shane is convinced that killing Randall is the only guarantee  of keeping the group safe.

Rick, Shane, Daryl escort Randall to the barn to put him to death. Rick hesitates as Randall Please for his life. Just as Rick is about to pull the trigger he notices Carl standing in the doorway watching. Rick’s conscience appears to get the better of him as he decides to delay the execution one more night.

Upset about how the nights vote had progressed, Dale walks the field. He comes upon a mortally injured cow. While investigating the animal Dale is attacked by the walker that Carl found in the woods. The zombie fatally injures Dale before the group can arrive and rescue him. The walker is quickly put to death and everyone tries to figure out how to save Dale’s life. Herschell arrives and informs Rick there is nothing he can do. Rick realizes that the humane thing would be to kill Dale so he does not suffer. However, Rick is unable to put Dale out of his misery. Daryl steps up and mercifully puts a bullet in Dale’s head in order to end his suffering. 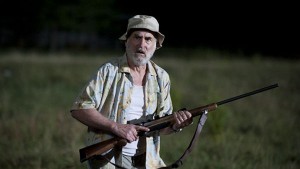 Rick: Rick is faced with a huge moral delima. He seems in the beginning to be resolved to the dirty business of killing a living human for the safety of the group. He only faulters when he hears his son’s voice urging him to kill Randall. It was like a light came on for Rick. A message was delivered to him through the actions and words of his son. Rick understood in that moment that his actions were being watched closely and that they had an impact on how his son viewed the world they were now living in.

Shane: Shane seems content to play it safe till he is able to make his move to over throw Rick as leader of the group. He still shows that he worries about Carl and will do what needs to be done to protect the boy, even if it means protecting him from himself.

Carl: We got to see a closer look into the child that is being raised during the zombie apocalypse. Carl is a very intelligent child but he is still a child. The adults around him are not treating him as a child being raised in the zombie apocalypse but as a child being raised in a world long gone. We see Carl’s confusion in his actions and in his words. We saw a lot of anger that he holds with in him that he seems unable to express when he told Sophia’s mother that Sophia was not in a better place. I feel for this boy because no one is treating him and teaching him how to survive in the world that he has been thrust into. Is it any wonder he was fascinated by the walker in the woods?  However, the end of the episode we see that Carl will now have to live with the fact that the walker he unleashed, was responsible for killing one of their own. That is a heavy burden for any one to carry, much less a child.

Dale: While he did die, he left a lasting impression on the group. It was ironic that throughout the episode he was fighting to save the groups humanity by being champion for Randall, only to have to be killed with the same gun that would have taken the boy’s life. 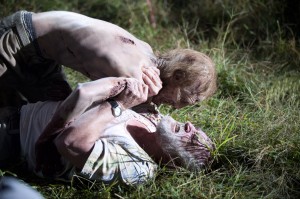 I did enjoy this episode mainly for the moral questions it presented. Certain scenes did halt the flow of the story being told, but every bit of it had a point that contributed. I especially enjoyed the scene between Dale and Shane. It pulled on their past conflicts with each other and the two were still able to part ways agreeing to disagree so to speak. Yes, the timing of the episode was slower than the previous one, but we enjoyed more character development and we got to know Randall better. I am curios to see if they do kill him or if they keep him around now that they are a man down.