It’s brutally impossible to fathom The Doors’ 1971 Elektra Records masterpiece, “L.A. Woman,” is the Los Angeles quartet’s sixth and final album with singer/poet/shaman Jim Morrison, not to mention sounding as fresh and amazing as anything that has come out since, by any band. What’s equally impossible is to hear an album you’ve heard millions of times in your life for the very first time, and yet, “Mr. Mojo Risin’: The Story of L.A. Woman” is a uniquely superb and insightful document chronicling the making-of the band’s storied swan song that allows you to experience this magnificent piece of work for what feels like the very first time (again.)

“Mr. Mojo Risin’: The Story of L.A. Woman” is hands-down an essential documentary for any film library, one of rich music history and permanent relevance, exhibiting the brilliance and intricacies of one of America’s most exciting and enigmatic bands.

At the close of the 1960s, the United States is in crucial turmoil, amplified by the Civil Rights Movement, the ramping up of the Vietnam War, the assassinations of John F. Kennedy, Robert Kennedy and Martin Luther King, Jr., not to mention the rise of what would be called the ‘Counter Culture.’ The Doors find themselves as the high priests of the Counter Culture movement, and arguably considered by the media as the most dangerous band in the country. In 1970, the band’s entire major US tour is canceled due to Morrison’s alleged Miami ‘indecent exposure’ case. With no venues to play, the band decides to head into the studio to make its last contractual album for Elektra Records.

The band and film go into great detail about the making of each song, sharing their behind-the-scenes secrets of a true ‘garage rock’ record, an album that only took the band a total of four days to record. Comprised of new interviews by surviving band members Ray Manzarek, Robby Krieger and John Densmore, including some of their closest collaborators and friends, as well as rare and previously unseen footage and photos, the film takes you through the mood, vibe and ethereal excitement of “L.A. Woman” from the ground up.

It’s quite interesting to see and hear individual pieces of these classic songs, such as the drum sequence for “Love Her Madly”, or the 12 string guitar riff for “Hyacinth House”, much in the vein of just hearing the vocals alone for a song you know and love so well. Through this, however, you really learn just how smart each band member is, really smart, learning of their various influences ranging from jazz to blues. This band definitely has a sound all unto itself, and a sound no one has ever been able to duplicate. Aspiring musicians will want to take note while watching this film. Most tracks on “L.A. Woman” were completed in just a few takes, live in the studio.

Fans of Jim Morrison alone will find this documentary interesting for the fact that it sheds some additional light about his life while making the album, as well as his possible cryptic motives for moving to Paris soon after recording was finished. The are are many eerie and spooky speculations throughout that Morrison may, in fact, knew his time on this earth was limited. It’s a sad scene to see how depressed Morrison is in the film’s archival footage and photographs, but interesting to see as music history, none-the-less. 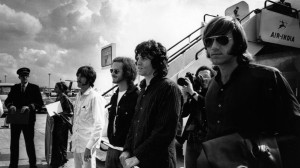 Let’s be honest, there isn’t anything on the market better than blu-ray right now, so deciding to roll with this film on blu-ray is the way to go. The new interview footage with the band members and other chaps looks pristine. That’s because it’s filmed at 1080i High Definition Widescreen 16×9 (1:78:1 aspect ratio.) The archive photos and film footage look clean and crisp, too, making you wish you could go back in time to see the band perform live (that is, if you never get the privilege to do so back in the day.) The audio is your standard DTS HD Dolby Digital 5.1 LPCM Stereo, so you can blow the windows out of your neighbor’s house when cranking “L.A. Woman” to 11. How happy we are in the modern digital age… 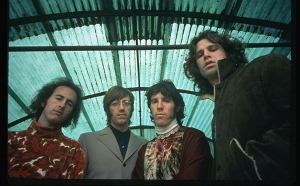 The blu-ray has some pretty great extra features, like extended interview cuts with drummer John Densmore and keyboardist Ray Manzarek. Fans are also treated to a sweet black and white ‘fly-on-the-wall’ film of the band rehearsing “Crawling King Snake,” in the studio, which has rarely been seen by the public. In addition, a visual tour of Los Angeles, set to the tune of the title track, offers a glimpse of Doors related historical markers in L.A., should you feel the need to check these places out for yourself the next time you are in town. A photo slide show of the band through the years against the backdrop of their recently discovered audio of “She Smells So Nice” is another nice extra for salivating fans, as well. Hearing unreleased Doors music from this time period is worth the cost of admission itself, folks.

I’ve been a Doors fan for a long time now, and have owned several copies of “L.A. Woman” in various formats over the years. Seeing this film, (though, in some respects, felt like watching an extended episode of VH-1’s “Behind The Music”) made me incredibly excited to learn about the behind-the-scenes making of one of my favorite records, from the mouths and archives of the band who created the album. The film really inspired me to listen to the record with fresh ears, like doing so for the first time. I’ve been a fan of Jim Morrison all this time, as well, but not like most young fans, who have associated the man simply with the sex, drugs and rock and roll lifestyle. “Mr. Mojo Risin'” gives me a new appreciation for the artist and poet I though I knew, but realized didn’t know at all, as well as an appreciation for the other equally brilliant artists in one of the most influential and brilliant bands ever.

Doors fans and over all rock music fans will want to own this documentary, for sure. Besides, you can’t get the awesome extras by streaming the film online. And if you really like this one, be sure to check out their 2010 film/documentary “When You’re Strange,” narrated by Johnny Depp.