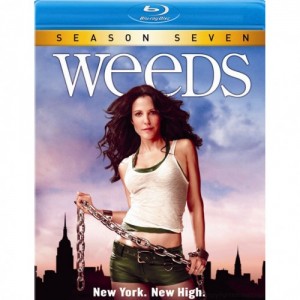 Here we are with season 7 of ‘Weeds’ on bluray and it does not disappoint.  The video and audio are superb on this bluray with some pretty decent extras as well.  It’s good to see some old faces pop up and some new faces in this seventh season.  I’m curious as to where they are going with show after this season, but I’m sure they won’t disappoint.  Season 7 of ‘Weeds’ is a must get if you are a fan of the show.

At the end of season 6, Nancy got arrested while her family headed to Denmark.  At the start of season 7, three years have passed and Nancy Botwin has been released from jail and into a strictly enforced parole house.  Her family gets wind of her getting out of jail and make the trip back to he states.  This time, they are in NYC.  For some reason, the writers of this season really aren’t giving Nancy any redeeming traits.  I mean, there really isn’t a good thing about her.  As soon as she is out of prison, she goes and wants back in the life of crime.  She at first tries to avoid her family and Doug, but ultimately she is almost forced to interact with them.  Most of the season is Nancy trying to get back into the weed selling business, using her somewhat charm and body to get what she wants.  Andy wants to open up a completely straight and legit shop from his invention the copenhagen wheel, which against his will, turns into a front for the pot selling business.  Shane enrolls in a college class of the criminal psychology kind and is taken under the wing of an agent.  All the while Shane, is using this guy to help his mom stay out of the limelight of the Feds.  Doug gets an awesome job from one of his long time friends at a financial firm as a backwards accountant.  And Sylas falls for a new girl who turns out to be the head girl in charage of a major pot operation in NYC.  And the overall story arc of the season is of Nancy trying to get her son, Stevie back in her custody from her evil sister who has been raising him.  This season isn’t the best of the series and I don’t quite see where it’s really going anymore.  At first, Nancy seems like a good person who is trying to provide for her family by any means possible.  But nowadays, she seems to not even want to be with her family and is only looking out for herself and wants the thrill of a life of crime.  There is a HUGE season ending cliff-hanger and at the time they didn’t know if they were going to renew the series or not, but alas, they are. 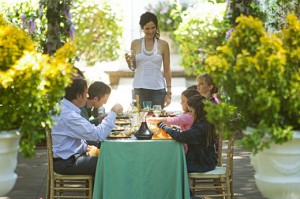 This bluray has a glorious 1080p HD transfer in 1.78:1 aspect ratio.  The picture looks stunning with its colors that are vibrant and its blacks that are deep and inky.  There was a hint of digital noise here and there but  artifacts that I could tell.  The textures and depth were incredible and the shots of the city of New York were beautiful.  This was a really good video presentation.  The audio has the impress DTS-HD 7.1 mix that Lionsgate is giving to their releases.  The dialogue is crystal clear with the ambient noise coming evenly through the other speakers.  The 7.1 mix really kicks in when there are some gunshots and other action sequences, but there are few. There was no hissing or cracks or distortion that I heard.  This audio presentation sounded great. 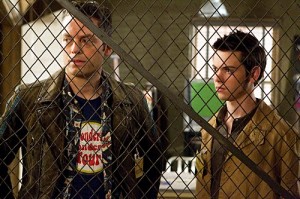 THE ULTIMATE WORD
Season 7 of weeds is fun and entertaining.  While you might not like it as much as the first few seasons, it has its moments.  The audio and video are really good on this release especially the 7.1 sound mix.  The extras for the most part are good, but there was a lot of footage that we have seen before.  I enjoy this show and I look forward to its 8th season coming up. If you can pick this bluray up for less than $20, then I’d say give it a go.
-Bryan