The Oscar Nominations Are In!!! The Muppets and Bridesmaids Get Nominations!!! 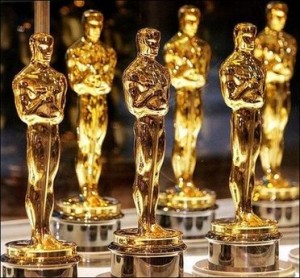 The 84th annual Academy Award nominations are in.  There are a couple of surprises that I was very happy to see on here and tons of disappointment.  It looks like the Academy went with 9 Best Picture noms this year rather than 10.  They also only went with 3 noms for make up which I can think of others, and only two for original song.  Was this a time issue, so that the event would be over on time for once rather than have all 5 songs being sung?  I don’t like it, but that’s how it is this year.  Below you will see each category with my thoughts.  Enjoy.

Nominations for the 84th Academy Awards

This is a great list minus “Extremely Loud & Incredibly Close”.  Why is “Another Earth”, “Drive”, and “Marth Marcy May Marlene” not on here?  “Moneyball” should not have been nominated for Best Picture.  Great to see “Tree of Life” on here and I think it should win, but it won’t.  And, I’m just saying, “Super 8” should definitely be on this list.

Go Woody Allen!  That would be awesome if he won.  Also, Malick is a great choice.  Again, where is Nicolas Winding Refn for “Drive”.  He should have been on there.  Also Mike Cahill should have been nominated for “Another Earth”.

Actor in a Leading Role

Okay, where is Ryan Gosling for “Drive” and Michael Parks for”Red State”.  And the big one, Andy Serkis did not get a nomination for ‘Rise of the Planet of the Apes’.  Not happy about this.

Actor in a Supporting Role

Go Jonah Hill and Nick Nolte.  Both were amazing in their roles.  But they are missing Albert Brooks from ‘Drive’, Alan Rickman from Harry Potter 7, and William Mapother from “Another Earth’.

Actress in a Leading Role

Great list here.  The usuals are on here.  But, the academy really fucked the ball here by not including Brit Marling for ‘Another Earth’ and Elizabeth Olsen for “Martha Marcy May Marlene’.  Those two need to be nominated, and I’m pissed they weren’t.

Actress in a Supporting Role

FUCK YES Melissa McCarthy!!  I so hope she wins.  That would be awesome.  If this were up to me, I would have nominated Elle Fanning for ‘Super8’ and Carey Mulligan for ‘Drive’.

Goooooo Rango!!  But no ‘TinTin’ or Winnie The Pooh??  For Shame!

WHAT THE FUCK?  No ‘Trollhunter’.  Again, for shame.

Good list.  ‘Harry Potter’ should have been on here though.

Hooray for ‘Midnight in Paris’, and ‘Bridesmaids’.  I hope either of those two win.  Secretly wishing ‘Bridesmaids’ would win.

‘Tree of Life’ should have been nominated.

‘Another Earth’, ‘Super 8’, ‘Drive’, and ‘Martha Marcy May Marlene’ should have been on here.

Go ‘Anonymous’.  I secretly wish James Gunn’s ‘Super’ was nominated for this category.

I’m all in for Paradise Lost 3, but that film is close to my heart. But why wasn’t ‘Project Nim’ nominated?  Shameful.

Decent selection, but ‘Super 8’ should have been nominated.

YES!!!!  ‘Muppets’ were nominated.  I hope the muppets make an appearance at the Oscars.  Go Muppets!!!

Again, like above, Harry Potter and ‘Super 8’ should have been included here.

Good list here, but again ‘Super 8’ should have been nominated.

All in all, tons of films got snubbed that shouldn’t have.  But that goes the academy.  Be sure to tune in right here for my annual live coverage on Oscar Night.

2 thoughts on “The Oscar Nominations Are In!!! The Muppets and Bridesmaids Get Nominations!!!”