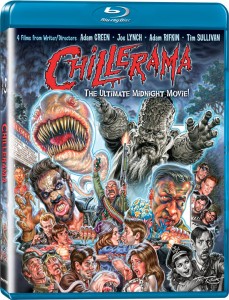 That tagline is correct.  This is the ultimate Midnight movie for you and your friends to drink, eat, and watch some of the schlockiest of schlock over a weekend.  You will NOT be disappointed.  With four short films by well respected and twisted horror filmmakers, you will get everything you wanted in a B-Movie fest.  With titles of ‘Wadzilla’, ‘I Was A Teenage Werebear’, ‘The Diary of Anne Frankenstein’, and ‘Zom-B-Movie’, you can expect your mind, body, and soul to to scream with maniacal laughter of all that is ‘Chillerama’.

The film takes place on the closing night of America’s last drive in theater.  Sadly the only drive in theater left in America will be closing.  So one man, by the name of Cecil B. Kaufman wants it to go out with a bang so he decides to go out in style and show a B movie marathon.  The films that he has chosen are so rare, that they have never been seen before by the public eye and are guaranteed to twist every nerve in your body.  What could possible go wrong?  So each of the four films are set in different time periods which was really cool.  The first one up is ‘Wadzilla’ by director Adam Rifkin.  Rifkin directed ‘Detroit Rock City’.  Can you guess what the Wad in Wadzilla is?  You guessed correctly.  It is sperm.  ‘Wadzilla’ (which is an homage to 1950’s horror) follows a guy named Miles you gets  the help of some drugs to help his sperm count and be fertile.  This proves a wrong decision and the drugs infect his sperm to grow to giant evil sperm.  I mean, who doesn’t want to see this?  AMAZING!!  The second short is directed by Tim Sullivan (2001 Maniacs) and is called ‘I Was A Teenage Werebear’.  This is more of a 1960’s beach homage film and is a lot of fun.  The short follows a guy named Ricky who is coming to terms with his blatant homosexuality.  He falls in love with a hunk named Talon.  LOL.  Do these chickens have large talons?  Talon bites Ricky on the ass, thus turning Ricky into a werebear.  But not a bear like a werewolf, but a bear.  The large hairy, gay dudes who dress in leather and love moustache rides.  Interesting turn of events, I know.  The next film was ‘The Diary of Anne Frankenstein’ by Adam Green (Hatchet, Frozen).  By the title alone, this should be required viewing in every household.  The title says it all really,  The Frank family is hiding a girl by the name of Anne and she realizes her last name is Frankenstein and that her relative has left her a diary explaining  and detailing how to create life.  Well guess who shows up?  Hitler.  Yes, Hitler steals Anne’s book to do some evil in creating “life”.  This is hilarious and is shot in black and white.  Now, we have arrived at the last short which is ‘Zom-B-Movie’.  This takes us back to the drive in theatre where there has been a background story of sorts between all the films.  It has all cultivated to this last short film which is directed by Joe Lynch (Wrong Turn 2).  So over the course of the film, the drive in theater audience has been turing into zombies who are feeding on other audience members and turning them into zombies.  In the end it is zombie decadence and debauchery.  Enough to go around for everyone.  But hold on to your butts….literally.  For there is a surprise little short at the end called ‘Deathication’. I do not want to spoil this, but just don’t be eating anything chocolate while viewing.

This is a great and unique video presentation.  It is presented in 1.78:1 in glorious 1080p.  But since the films are made to look like either the 50’s, 60’s, grindhouse, or black and white, there are tons of post production FX to make the film grainy and look like it has been lost on a shelf for many years.  But I think that this is part of the film’s charm.  With the different styles of the film, the use of colors and depth are presented differently.  So it really is hard to talk about the video aspect of such an insane release.  But I will say this, it looks great.  The detail and colors are great, there is really no flaws anywhere that aren’t a part of the style of the certain film.  A lot of fun and love went into this.  There is a nice lossless DTS-HD 5.1 audio mix.  The dialogue is nicely centered on the front channels and the ambient screams and bumps in the night cover the entire sound system.  Even all the man-made crackles and fuzz is a nice touch too.  It takes you back to the times of grindhouse cinema.  A true delight. 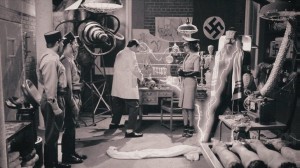 THE ULTIMATE WORD
This was a fun as hell movie only to be watched with drunk or stoned friends after midnight on a weekend.  It will definitely be added to the list of Halloween films as well.  This is only for those die hard B movie lovers like myself.  The audio and video are great , while the extras are mostly impressive.  I definitely recommend this bluray to anyone who loves horror and b movies.  You will love it for years to come.
– Bryan Kluger