All 22 Bond Films Will Be Released on Bluray In One Big Mega Set!!! 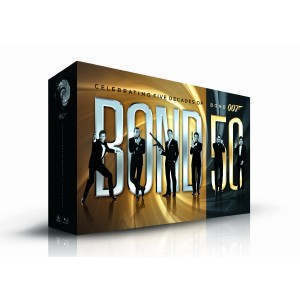 That’s right.  At CES yesterday, it was announced that all 22 James Bond films that span 50 years will all be released on bluray this year.  From Dr. No to Quantum of Solace and everything in between will be available in HI-DEF.  Acclaimed Bond directors John Glen (five Bond films including ‘For Your Eyes Only,’ ‘Octopussy,’ ‘A View to a Kill,’ ‘The Living Daylights’ & ‘Licence To Kill’), Martin Campbell (‘GoldenEye,’ ‘Casino Royale’) and Michael Apted (‘The World Is Not Enough’) with special guests Olga Kurylenko (‘Quantum of Solace’) and Caterina Murino (‘Casino Royale’) made the Blu-ray announcement during a Directors’ Panel discussion in the Panasonic Booth at the annual Consumer Electronics Show.

‘Bond 50’ showcases fifty years of Bond neatly packaged into one cool, sleek collectable box-set featuring all six iconic James Bond actors. Produced using the highest possible picture quality and audio presentation, and more than 130 hours of bonus features including some new and exclusive content.  So if you are a Bond fan, then thisw is the ultimate set for you and just in time to get all caught up before the next installment of Bond in ‘Skyfall’.

Available for pre order now for a special price.  Also We will keep you updated with all the details of Extras.