New Transformers in the Works?!?!? 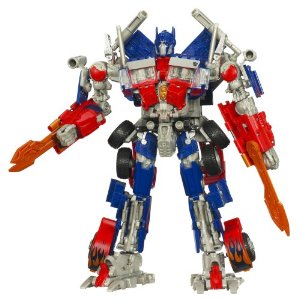 Revenge of the Fallen was terrible! Dark of the Moon was just plain mockery! YOU DIDN’T LEAVE ANY LOOSE ENDS, YOU IDJITS!!!

But seriously, how does this work? You even had to replace the girl in the third one (not that it wasn’t a blessing), for Pete’s sake. Leave well enough alone, guys.

All right then, let’s be practical here. A fourth Transformers could work one of two ways.

A prequel, showing the war on Cybertron between the Autobots and the Decepticons.

Pros: A chance for Michael Bay to do what he does best – blow things up. Also, we’d get more of those amazing special effects that all three movies do admittedly boast. And Hugo Weaving could come back. Nothing made me angrier than *SPOILER ALERT* Megatron’s death.

Cons: We already know how it ends. There would be no suspense, no surprises. We’d be sitting through the movie, thinking “Yes, Optimus is cool. Megatron is BA. Sucks that the planet doesn’t survive the war.” Also, no humans. The Transformers’ emotions towards humans are part of what makes the movies vaguely interesting – you know, Autobots are really impressed with us, Decepticons want to kill us all. Little details like Bumblebee’s affection for Sam were the highlights of the Transformers franchise; take out the humans, and nothing would be “more than meets the eye.”

Or B. Bring in The Destroyer of Worlds, Unicron.

Pros: That would definitely give Bay a challenge in special effects, and there’s no doubt that it would be awesome to behold. Unicron is, for one thing, bigger than entire planets and yellow with wings.

Cons: Well, for one thing, to follow the story and keep Unicron’s powers intact, Bay would have to bring in key players like Galvatron, Neo-Knight Rapture, and probably Scorponok – not to mention Primus, Unicron’s brother. Why is this an issue? Well, we’ve all seen how terrible Bay is with character development; half the time it seems like he’s not even trying. Revenge of the Fallen, where eight bajillion new characters were introduced and summarily killed off, is a prime example of that. Galvatron alone would need his own part to explain his existence, and Primus’ story would take another hour. A fourth Transformers in this vein would have to split into at least two (like Revenge should have been.) The other issue is that most of Unicron’s arcs take place within alternate timelines, and few movies can pull that off. Again, few-to-no humans involved.

Please, Bay, for all that is decent and good, don’t do it. Just don’t try.

But if you must…just don’t kill off Bumblebee. My heart couldn’t take the despair.