Joss Whedon Tells Us About His Secret Project, ‘Much Ado About Nothing’!!!

Oct 24, 2011 joss whedon, much ado about nothing, play, secret project 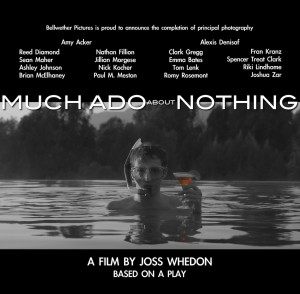 Joss Whedon revealed that he worked on secret project on twitter last night and released sort of a press release about it.  Whedon brought us the Buffy universe, the Firefly universe, and now he is bringing us ‘The Avengers’ for Marvel.  This secret project definitely sounds interesting.  Check out the website HERE.

Bellwether Pictures proudly announces the completion of principal photography on MUCH ADO ABOUT NOTHING, a modern version of Shakespeare’s classic comedy adapted and directed by Joss Whedon (Marvel’s upcoming THE AVENGERS, “Dr. Horrible’s Sing-Along Blog”).  Filmed in just 12 days entirely on location in exotic Santa Monica, the film features a stellar cast of beloved (or soon to be beloved) actors – some of them veterans of Shakespearean theater, some completely new to the form.  But all dedicated to the idea that this story bears retelling, that this dialogue is as fresh and intoxicating as any being written, and that the joy of working on a passion project surrounded by dear friends, admired colleagues and an atmosphere of unabashed rapture far outweighs their hilariously miniature paychecks.MUCH ADO ABOUT NOTHING is the first feature from Bellwether, a micro-studio created by Joss Whedon and Kai Cole for the production of small, independent narratives for all media, embracing a DIY ethos and newer technologies for, in this particular case, a somewhat older story.Shot in glorious black and white by Jay Hunter (PAPER HEART, “Dollhouse”), the film stars Amy Acker (CABIN IN THE WOODS, “Alias”) and Alexis Denisof (“How I Met Your Mother”,  “Angel”) as Beatrice and Benedick, the world’s least likely lovers headed for their inevitable tumble into love.  As Joss Whedon puts it: “The text is to me a deconstruction of the idea of love, which is ironic, since the entire production is a love letter – to the text, to the cast, even to the house it’s shot in.”  The supporting cast includes Nathan Fillion (“Castle”, WAITRESS) as Dogberry, Clark Gregg (AVENGERS, IRON MAN) as Leonato, Fran Kranz (CABIN IN THE WOODS, “Dollhouse”) as Claudio and Reed Diamond (“Franklin & Bash”, MONEYBALL) as Don Pedro.  The film was produced by Whedon, line-produced by Nathan Kelly and M. Elizabeth Hughes, and co-produced by Kai Cole and Danny Kaminsky.  The super-impressive cast is listed below.  Full tech credits (for the extraordinary crew) will be up shortly.  The film should be completed by early spring and headed for the festival circuit, because it is fancy.